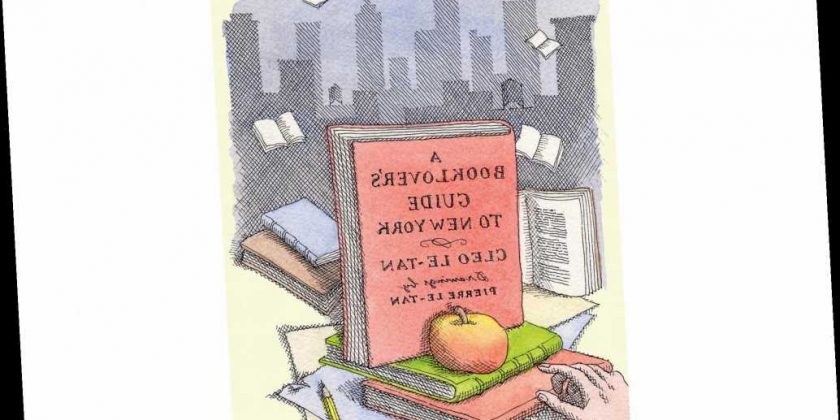 Every once in a while, a book comes out that celebrates books themselves and the people that adore them.

“A Booklover’s Guide to New York” by Cleo Le-Tan (published by Rizzoli) is a beautifully illustrated love letter to bookish New York, with drawings by Pierre Le-Tan.

Cleo, who was raised in Paris, takes the reader on a delicious literary tour of New York, categorized by neighborhood. The city changes at a dizzying pace, which makes any existing literary spots all the more precious, whether it’s the Mysterious Bookshop at 58 Warren St. (100 percent crime fiction) to stores that sell only cookbooks to places with literary pasts, such as Minetta Tavern (113 MacDougal St.), formerly a regular hangout of Ernest Hemingway, e.e. cummings and Ezra Pound.

Or the proud Gramercy Typewriter Company (108 W. 17th St.), a third-generation family-owned store selling gorgeous typewriters (they also repair them). Le-Tan covers everything from a library inside a subway station (the Terence Cardinal Cooke Cathedral Library, located just outside the turnstile entrance to the 6 train at Lexington and Fifth) to the restaurant booth where the first lines of the children’s classic “Madeline” by Ludwig Bemelmans were written.

“The first lines of Madeline were written here, as was ‘The Gift of the Magi,’ ” says Gary Egan, manager of Pete’s Tavern (129 E. 18th St.). “The ambiance and the neighborhood really help. Everything around Gramercy Park also contributes to that — the Players Club, the National Arts Club … Don’t forget, in the late 1800s to early 1900s, this used to be considered ‘uptown.’ ”