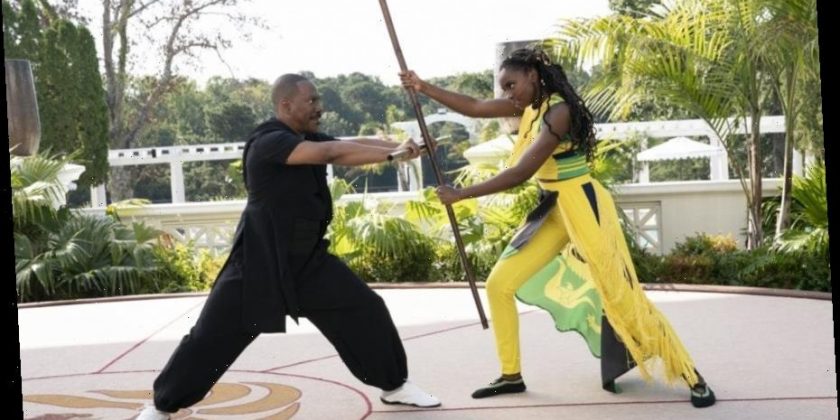 Actress Kiki Layne is stepping into her power for the role of a lifetime. This talented beauty has been tapped for the role of Meeka, the eldest daughter of Prince Akeem and Lisa, in the star-studded film Coming 2 America.

ESSENCE spoke exclusively with Layne about her character in the highly-anticipated film and how her role as the former marine Nile Freeman in the Netflix film The Old Guard prepared her for the physical demands of this new role (a little sparring, anyone?)

“I felt so much better about [the combat scenes in the film] after doing all the training for The Old Guard,” she said. “I felt a lot more confident just learning fight choreography and tapping into that warrior energy experience. It made me a lot more comfortable learning the new weapon.”

Layne’s character Meeka, who is the eldest daughter of Prince Akeem and Lisa, is a bit more serious that the other comedic cast of characters. The fierceness required to play Meeka was something Layne drew from an undiscovered inner warrior that she says was always there, but not always evident.

“The regalness [of Meeka] was already there in me,” she says. “So then I just got to let it blossom under the circumstances of the character that I was playing. What’s cool is tapping into that warrior spirit and that loyalty that I found to be very similar to Danai’s character in Black Panther. That’s one of the fun things about acting. It’s when you start to see the things that you need when going into character that are kind of already in you.”

KiKi Layne is just one of the many new faces that have been cast in the Coming @ America sequel. Other stars like Jermaine Fowler, Wesley Snipes, Tracy Morgan, Leslie Jones, Rotimi, Teyana Taylor and Eddie Murphy’s daughter Bella Murphy have also been cast in the film.