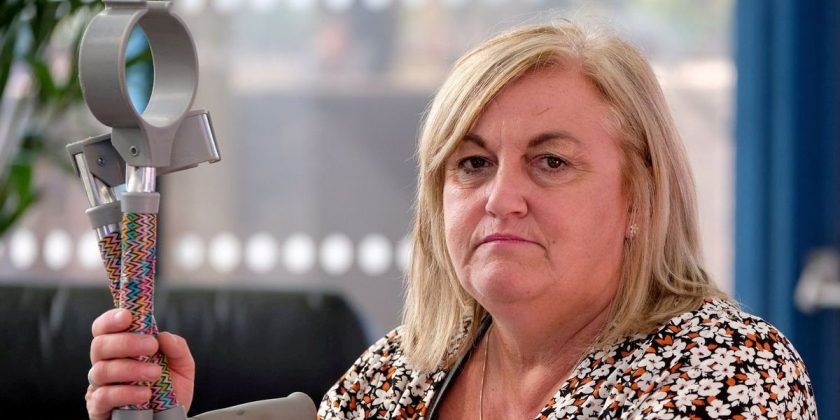 A mum feels like her life is ruined after “botched” operations at the hospital where she worked for 22 years.

Lynne Hammond, a former A&E receptionist at Southmead Hospital in Bristol, says she has suffered more than four years of “horrific” pain because of alleged mistakes by her ex-employer.

The 53-year-old doubted her own sanity when she was in long-term agony after a right hip replacement in July 2015, as doctors allegedly told her there was no reason she should be in pain.

But the screws in her hip were broken and loose for years.

She has also had blood poisoning and a fractured pelvis – all of which she links to her hip replacement and subsequent operations at Southmead.

Lynne, mum to two grown-up children, was dismissed from her job at Southmead because she was unable to work.

She says she is “practically housebound” and cannot walk without crutches after three right hip replacements.

“I’m 53 and I don’t believe I will be able to work again," she said. "It’s been absolutely horrendous.”

Lynne had arthritis for about 18 months before her first replacement, but says her discomfort during that period was relatively minor.

She said: “After the op, I was in a lot of pain. I said this to the consultant but they said my x-rays looked fine.”

Lynne was in too much pain to go back to work and says she soon started to face pressure from the hospital’s HR department.

She said: “I was put on half-pay after 10 months. They asked me to resign. They said even if I had cancer, I would only have one year to come back to work.

“I had a meeting with a surgeon at the hospital who said, ‘I have no idea why she is in so much pain.’”

Her partner Nick Bawden, 46, added: “She was crying through the night. She spent time having to use a wheelchair.

“Before the op she never needed one. She was doing 12-hour shifts.”

Despite a second and third opinion at the hospital, a cause for Lynne’s agony was yet to be identified.

In July 2017 her surgeon told her there could be “no harm” in having another replacement.

She added: “I had the second operation, and afterwards the surgeon said, ‘No wonder you were in so much pain’.

“I had one broken screw and three loose from the first replacement three years before.”

Lynne says she was told she had metallosis – a buildup of metal debris in soft tissue – and blood poisoning.

She added: “I had thought I was going mad, that the pain was in my head.”

Lynne was released from hospital after a week, hoping she could finally recover.

Instead, she says she was soon battling “the worst pain ever”.

After more than six months of confusion over what was wrong, her doctor informed her she had a fractured pelvis.

“I had been walking round on a broken pelvis from the hip replacement,” she said.

“The screw in my hip was broken and I had metallosis again. I was told I needed pelvis reconstruction and another replacement.

“The surgeon said, ‘If the next op doesn’t work you will be left without a hip.’”

The third replacement, last November, finally rid Lynne of metallosis, but she says she remains in “tremendous” pain, on extremely heavy pain medication and unable to walk without crutches.

Lynne has struggled with depression and suicidal thoughts as a result of her pain.

She filed a claim against North Bristol NHS Trust for clinical negligence and a hearing was set for October 2018.

The couple could not afford the legal fees and decided the risk of having to pay them was not worth it, so they scrapped the claim.