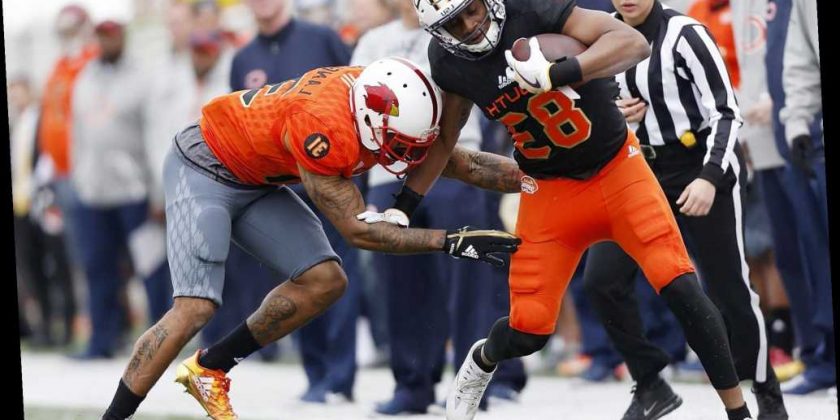 While the Super Bowl is just over one week away, fans looking to get their football fix sooner can turn to a different game this weekend: the Senior Bowl.

On Saturday, more than 120 of the top college football players and NFL draft prospects in the country will gather in Mobile, Alabama, for the 71st annual Reese's Senior Bowl, according to the game's website.

Some of the NFL's top stars got their start in the Senior Bowl, including Dan Marino, Brett Farve, Dak Prescott and Terrell Owens, among others.

For the first time ever, the all-star game will be played at the University of South Alabama's Hancock Whitney Stadium.

Though this year's game is sure to look different — especially given the ongoing coronavirus pandemic — here's everything you need to know.

What is the Senior Bowl?

The Senior Bowl brings together the nation's elite draft prospects from colleges around the country to showcase their talent and connect with coaches from all 32 NFL teams.

Each year, NFL staff coach the two Senior Bowl teams, the American and the National. The rosters of both teams feature senior collegiate football players, according to the game's site. How is everyone staying COVID safe?

To adhere to COVID-19 safety precautions, all practices for the Senior Bowl will be closed to the general public and a majority of the fan-related events have been canceled.

The seating capacity for Saturday's game has also been significantly reduced to comply with local and state government public health orders. According to AL.com, attendance will be restricted to a little over 6,200 fans and tickets have already sold out.

"The most unfortunate part of this year's Senior Bowl for us here in the office is that the fan interaction won't be anywhere near what it is in a normal year. … The only way to pull this event off was to create a strict bubble," Senior Bowl executive director Jim Nagy told AL.com.

All players, coaches and support staffers within the Senior Bowl bubble will also be tested daily for the coronavirus, the Associated Press reported.

"I will say this — we were not going to move forward with this year's game if we didn't know we could do it safely for the players and the NFL personnel coming to town," Nagy added. "It's going to be absolutely huge for these players that are here, as well as the NFL teams who have not had any face-to-face interaction with them in the past year. This might be the only chance they have for that before the draft in April." How can I watch the game?

The Senior Bowl will be nationally televised by NFL Network at 2:30 p.m. EST on Saturday.

Thursday's practices will also be covered by ESPN on ESPNU. The NFL Network will additionally air hour-long recap shows each evening.