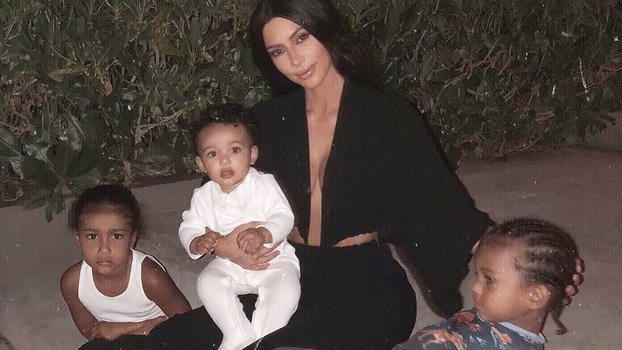 2018 is almost over, and that means another year of Kardashian mom-shaming is nearly behind us. Most parents encounter judgemental, unsolicited, and unnecessary feedback from strangers, but it takes on a new form when it comes to celebrities — in particular, celebrities who make a living off of sharing their lives on a reality show and on social media.

In 2018, Kim Kardashian West was the first of her siblings to feel the burn of the internet parenting police when she dared go out to celebrate New Year’s Eve, but that was far from the end of it. Kim has three children, as does her older sister, Kourtney Kardashian, and their siblings Khloe Kardashian and Kylie Jenner also welcomed kids for the first time this year. In other words, 2018 saw more Kardashian moms, and more Kardashian mom-shaming than ever.

The Time Kim’s Went Out For New Year’s Eve

Kim began 2018 being criticized for celebrating the new year when her son, Saint, was in the hospital. However, Saint had been released the day before, as Kim explained on Twitter.

The Time Kim & Kanye Went to a Movie

After welcoming baby Chicago on Jan.15, Kim and Kanye went to a movie screening on Jan. 21 that, according to TMZ, they were hosting. That fact didn’t make a difference to those criticizing — according to Romper, someone even claimed that Kim chose to use a surrogate so her “social life wouldn’t be interrupted.”

The Time Kim Posed in Underwear After Having a Baby

At the end of Jan. 2018, Kim posted a video of herself on Snapchat and Instagram Stories posing on a bed wearing a low-cut shirt and a thong. As reported by Romper, some people were very concerned because she’d just welcomed a new baby and “you have kids that one day you have to explain this to.” It’s worth noting that this was the same photo shoot where she wore Fulani braids, so there was something else worth talking about there.

In fall 2018, Kim posted a photo of North wearing orange eyeliner, and people shamed her for letting her daughter wear makeup, according to Life & Style. Earlier in the year, Allure reported that Kim tried to get ahead of mom-shamers when she posted an Instagram Story of North wearing lipstick, and wrote, “Relax Mom Shamers it’s coming off in a few mins. I needed a bribe to get out of the door…You feel me?!?!?!”

When Kim posted an Instagram of North in which the 5-year-old’s hair was straightened, people started criticizing the decision, with some commenters writing, according to Allure, “I can feel the heat damage from here!” and “That poor baby’s curl pattern is gonna be all jacked up…” Kim had previously talked about the decision to straighten North’s hair with The Hollywood Reporter. “It was her birthday and all she wanted was to try to have her hair straightened,” Kim said. “I’m not gonna let her straighten her hair all the time, but if she wants it that way two or three days a year, then that’s fine with me.”

The Time North Took a Photo of Kim

Kim shared an Instagram of North taking a photo of her while she was either taking off her bra or putting it on. Kim captioned the pic simply, “by North”, and with that, the response started rolling in from someone saying any other parent would have social services called on them, to fans defending Kim and saying that a mom changing in front of her kid is totally fine, as reported by People.

The Time North Wore a Bikini

Kim posted an Instagram of North wearing a bikini while in Miami and got a wide variety of responses. Some commenters said they were OK with babies wearing bikinis, but not children. According to Yahoo, someone even went so far as to say that the swimwear choice “could maybe give wrong signals.”

The Time Kourtney Posed Nude While Also Being a Mother

Kicking off her own year of being mom-shamed, in Jan. 2018, Kourtney posted a nude Instagram to promote “fitness week” on her app. As reported by Romper, she was promptly reminded that she is a mother.

The Time Kourtney Wore a Bikini While Also Being A Mother

Also in Jan. 2018, Kourtney shared an Instagram of herself wearing a thong bathing suit while lounging in Mexico. According to PopSugar, mom-shamers said things like, “You are a mother don’t forget it. What’s the point of showing the world your beautiful ass?”

Another nude pic, another controversy. Kourtney posed nude for GQ Mexico’s December 2018 issue and, according to Yahoo, got responses like, “Women at a certain age should know when some things are not appropriate even though you have a nice body. Think of your children.”

The Time Kourtney Let Her Son’s Hair Grow Out

In December 2018, Kourtney posted a photo of herself and her son Reign and got plenty of requests to cut his hair, including one that asked, “What is your point?”

The Time Khloe Put True in a Head Wrap

Baby True often wears head wraps and other hair accessories and, as pointed out by StyleCaster, some fans believe it’s because she’s ashamed of True’s hair or the shape of her head.

The Time Khloe Was Shamed For Working Out After Giving Birth

As reported by People, a little over a month after welcoming her daughter, True, Khloe defended herself after being shamed for working out. “What I’m annoyed about is that I’ve read a couple of times on Twitter that, you know, they feel that I’m focusing too much on my body, but the truth is, I’ve worked out five or six days a week before I got pregnant and that’s my sanctuary and something I love to do,” she said on Snapchat.

The Time Khloe Was Shamed for Using Formula

Khloe has also said that she’s been shamed for not solely breastfeeding, and explained her decision to also use formula in response to a fan on Twitter.

As reported by Elle UK, two months after welcoming True, Khloe was criticized for piercing her daughter’s ears.

The Time Khloe Used Filters On Photos Of True

As reported by Romper, in May 2018 when Khloe shared the same video as above, people were annoyed that she used a filter on the pic that gave True freckles and a flower on her face.

In July 2018, Khloe tweeted that she was getting flak for going out three months after having her daughter. As she explained, she was at a charity event and True was with her father, Tristan Thompson.

StyleCaster reported in December 2018 that Khloe was shamed for the way she held True in a photo she posted on Instagram, because True was held facing away from her. One person used the hashtag “#healthisbetterthanmoney.” Months earlier, StyleCaster also reported that people were upset when Khloe shared a photo of True that showed the baby leaning her head on her mom’s hand with people saying, “That poor child’s neck” and saying that she uses her child as an “accessory.”

The Time Kylie Went to Coachella

According to People, Kylie was mom-shamed for going to Coachella in April 2018, just two months after welcoming her daughter, Stormi, in February.

Stormi’s ears were pierced in July 2018, only a couple months after she was born, which got people debating whether it was acceptable or not.

In December 2018, Celebrity Insider reported that when Travis Scott shared a photo of Stormi on Instagram, some commenters blamed Kylie for dressing her “like a boy.” The site notes that there were plenty of fans defending the baby’s outfit, too.

The Time Kylie Got a New Car

In March 2018, Kylie got a Ferrari from boyfriend Travis Scott, which is not the most relatable thing, but she was also shamed for it, reports Romper, because it cannot fit a car seat.

It’s obvious that 2018 was a big year for mom-shaming the Kardashian-Jenner sisters. Sure — sometimes, they’re probably wrong. Then again, when you look at all of the arbitrary mom-shaming on this list, it’s hard to believe that they could do anything right. Hopefully, 2019 will see less mom-shaming across the board, both celebrity and otherwise.