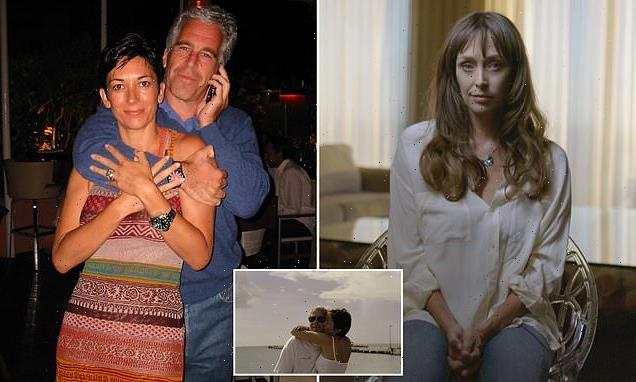 ‘Epstein fed off the terror of a girl being scared’: Sex trafficking victim speaks for the first time in BBC’s House of Maxwell – revealing how she was lured to his island and raped three times a day as part of his ‘factory’ of abuse

A victim of Jeffrey Epstein has spoken out for the first time in a BBC documentary, describing how she was lured to his private island where she was forced to visit his ‘ice cold, pitch black’ bedroom and raped up to three times a day as part of his ‘factory’ of abuse.

Juliette Bryant, from Cape Town, South Africa, was a 20-year-old aspiring model when she was first introduced to the billionaire paedophile, who told her she had the ‘most beautiful figure he had ever seen’ and promised to fly her to New York to launch her career.

But instead Juliette was taken on his private jet to his Caribbean island where she became trapped in the sex trafficking operation ‘run’ by Epstein and ‘operated’ by Ghislaine Maxwell.

Speaking in BBC2 series House of Maxwell, which premieres on Monday night, Juliette tells how she watched other victims perform sex acts on Epstein and was sexually assaulted by the predator on a number of occasions over almost two years. She estimates she saw 60 girls and women in the time she was there.

‘Things happened there that scared me so deeply that I can’t even talk about them,’ she says. ‘He fed off the terror, there was something about the energy of a girl being scared that he liked.’

She also shares never-before-seen photos she took Epstein’s island, including one of Maxwell and one of an artwork depicting a woman being raped by a sea monster.

Juliette, who in 2019 filed a lawsuit against Epstein’s estate alleging the former financier had repeatedly raped her numerous times, explained she and other victims had been too afraid to speak out because Epstein threatened her and her family.

‘It was just like a factory,’ she says. He was running a machine and Ghislaine Maxwell was the one operating it. People ask why I went back. Nobody disobeyed Epstein.’ 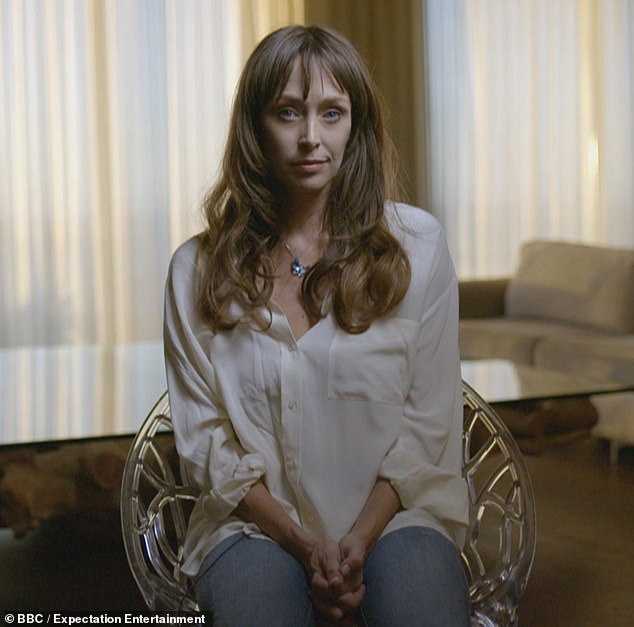 Juliette Bryant, from Cape Town, South Africa, spoke out for the first time on forthcoming BBC documentary House of Maxwell about being held against her will on Jeffrey Epstein’s island 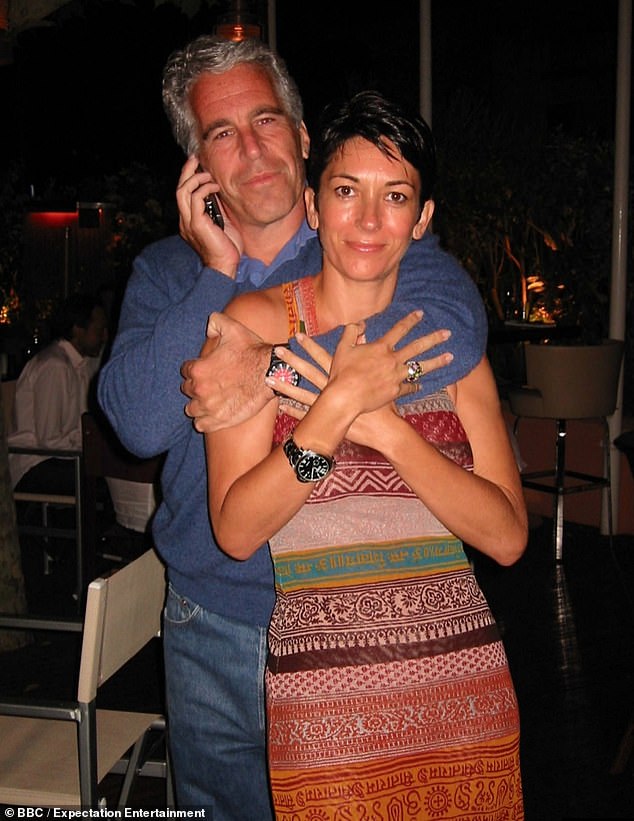 Now, however, she wants to shed light on the industrial scale of the abuse she witnessed, which involved carefully coordinating visas and travel plans for dozens of girls and women from around the world over a number of years.

‘I’m tired of feeling ashamed when I didn’t actually do anything wrong and I know I’m one of the lucky ones I know other people have had far worse and that is who I want to speak for, for the people who can’t talk anymore.’

BBC Two’s House of Maxwell charts how Ghislaine Maxwell went from a multi-millionaire’s daughter to a woman convicted of grooming and trafficking underage girls.

Juliette’s ordeal started in 2002 when Juliette was approached by a ‘beautiful’ American girl asking if she was a model and whether she wanted to meet her ‘friend’, who she claimed had links to Victoria’s Secret.

‘I was just a young girl with hopes and dreams and thought I could really make something of my life, some sort of modelling [career],’ she said.

Soon after she presented her modelling portfolio to Epstein in a hotel room, where he told her she had ‘the most amazing figure I’ve ever seen in my life’. 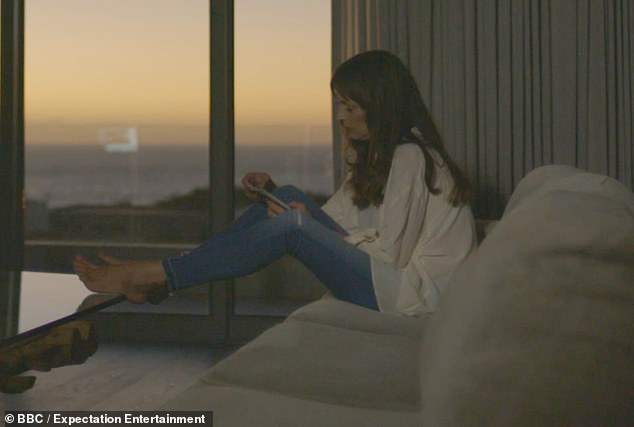 Juliette was forced to go to travel to island for various periods on and off for nearly two years, revealing ‘I was so broken at that point, I just sort of went along with it’ 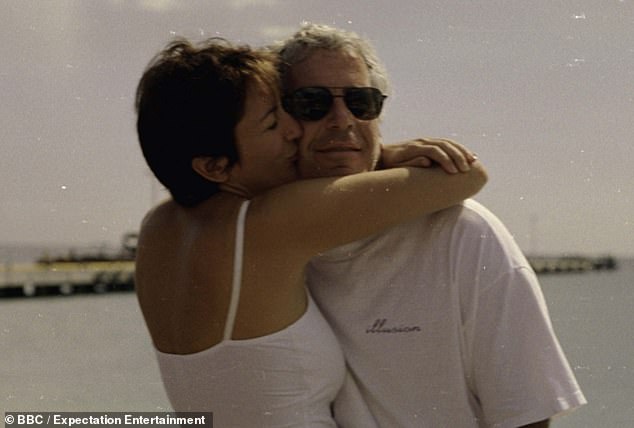 When Juliette was first introduced to Ghislaine she was told that they were a couple, but remains unconvinced their relationship was ever romantic

Epstein said he wanted to take Juliette to New York to launch her modelling career, offering to pay for her visa and ticket.

‘I thought it was going to be the most amazing opportunity of my life,’ Juliette recalls.

But instead of flying to the US, Epstein’s office phoned Juliette and said she would be flying to Epstein’s island in the US Virgin Island. She assumed the purpose of the trip was for a photoshoot and ‘immediately said yes’.

However Maxwell’s legal team requested that her sex trafficking conviction be overturned and the case be retried in January.

Maxwell is hoping for a retrial after it emerged that one juror failed to disclose that he was sexually abused as a child before the trial.

In February, lawyers for the disgraced socialite filed another 37-page appeal at a New York court claiming ‘erroneous’ jury instructions made her conviction unfair.

Jurors seemingly believed one victim – who gave her name only as Jane – who said she was abused by Epstein and Maxwell at his ranch in New Mexico when she was 16.

The appeal documents say: ‘A jury note sent during deliberations indicted that the jurors were considering convicting Ms Maxwell…based solely on the New Mexico conduct.’

Maxwell’s lawyers argue that the judge should have explained to jurors that under New Mexico law ‘Jane’ was not underage and should have instructed them to focus only on alleged sex assaults in New York where the age of consent is 18.

Maxwell, 60, faces up to 65 years in jail when she is sentenced on June 28 after being found guilty in December on five charges.

Juliette recalls being astounded by the beauty of Epstein’s notorious island when she arrived. She discovered a pile of discarded disposable cameras which she used to take photographs of her time on the Caribbean island.

The photographs, shown for the first time in the documentary, include ones of her posing by the docks, photos of the small chalet in which she stayed near the port and a disturbing artwork showing a deformed sea creature clambering on top of a naked young woman.

‘It was a naked girl and there was like a big walrus it looked like the walrus was trying to rape her, it was a very disturbing picture. I’ve never seen a picture like that’, she says.

Other images show Juliette with a camera inside Epstein’s island home, Maxwell eating a meal on a table and Epstein’s bedroom which included a four poster bed with white bedding and mosquito netting.

‘He had a lot of weird stuff around his house. There were just pictures of naked girls everywhere and there were a lot of naked pictures of Ghislaine too.’

But shortly after arriving on the island, it became clear the trip was far from the dream destination photoshoot she had imagined.

Juliette was asked to watch a movie with Epstein and another girl. To her horror the girl began performing a sex act on the paedophile.

‘I was absolutely petrified,’ Juliette recalls. ‘I was so young, I’d never seen anything like that. I was crying, I just ran out of the room. I didn’t know what to do.

‘There was no hope of getting away. I was in a foreign country with no money or cell phone or means of communication.

‘I just realised then I was completely trapped and there was nothing I could do. Ghislaine was running the girls and would tell us when we needed to go to his bedroom, you couldn’t say no, there was just no option.’

She remembers his bedroom as being ‘pitch black and ice cold’ and says she dissociated with her body as he sexually assaulted her.

‘I just checked out of my body and let him do what he wanted because I didn’t know what else to do,’ Juliette recalls.

‘I tried to escape in my mind, I tried to pretend it wasn’t happening. Things happened there that scared me so deeply that I can’t even talk about them.

‘He fed off the terror, there was something about the energy of a girl being scared that he liked.’ 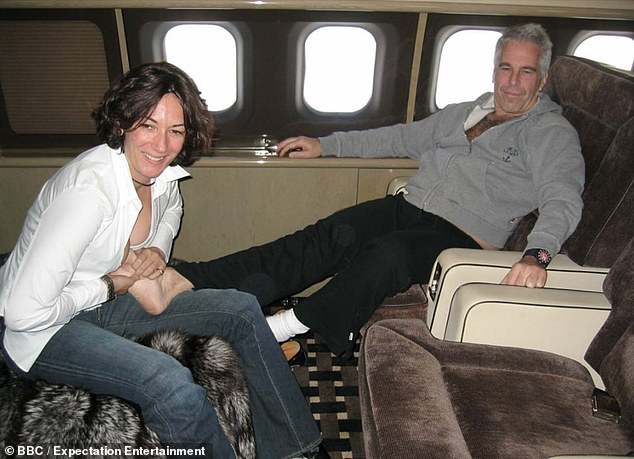 Epstein’s office called Juliette and told her they would be flying to the Caribbean – where she assumed they would be having a photoshoot. Maxwell is seen giving Epstein a foot rub on board his private jet

When Juliette was first introduced to Ghislaine she was told that they were a couple, but remains unconvinced their relationship was ever romantic.

‘The thing is, I didn’t even see them hold hands or kiss once,’ she says. ‘I never saw them give each other a hug. To be honest, I never saw them come that close, so it definitely was not a romantic relationship.’

Before she was sent home Juliette was threatened by Epstein who told her of another girl who had accused her of rape and ended up in jail because he had planted drugs in her home. Juliette was also warned her family was ‘on a list’.

‘I just did as I was told,’ she says. ‘I was petrified of him, who he was. I knew crossing him would be a very bad idea.’

Juliette was forced to return to the island for various periods on and off for nearly two years.

‘I was so broken at that point, I just sort of went along with it,’ she says. ‘I never felt okay again after that, everything just fell to pieces, it’s very, very hard to understand I am still trying to piece it all together.’ 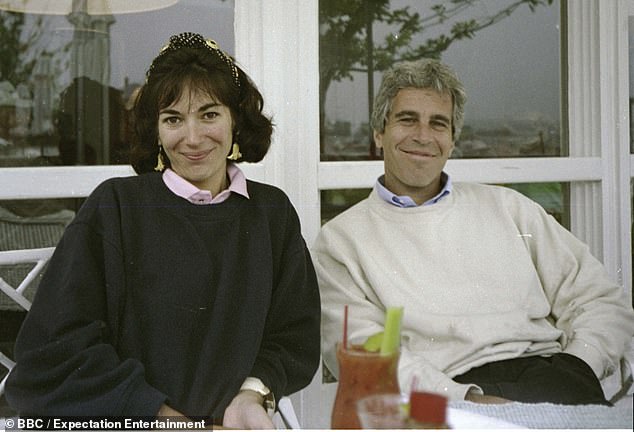 None of the victims ever tried to rebel against Epstein and Maxwell, with Juliette revealing that it would have been ‘very scary making them angry’

Epstein killed himself in prison in 2019 while awaiting trial on sex trafficking charges.

Maxwell was convicted of trafficking girls in December last year but her lawyers are requesting a new trial after information emerged about one of the jurors.

‘Juliette is a remarkable woman. She’s a very strong independent woman,’ series producer Isfryn said ahead of the programme’s premiere.

‘She really felt strongly that she wanted to speak for those woman, who were girls some of them at the time, who can’t.

‘I think the other thing she felt she wanted to get across was the complexity of this sex trafficking operation in terms of when she describes the visas, travelling.

‘If you just look at how many different women, from different countries, from different years and I think she really wanted to convey how masterful they were at grooming women and girls and how well they did that for such a length of time.’

House of Maxwell begins Monday at 9pm on BBC Two.