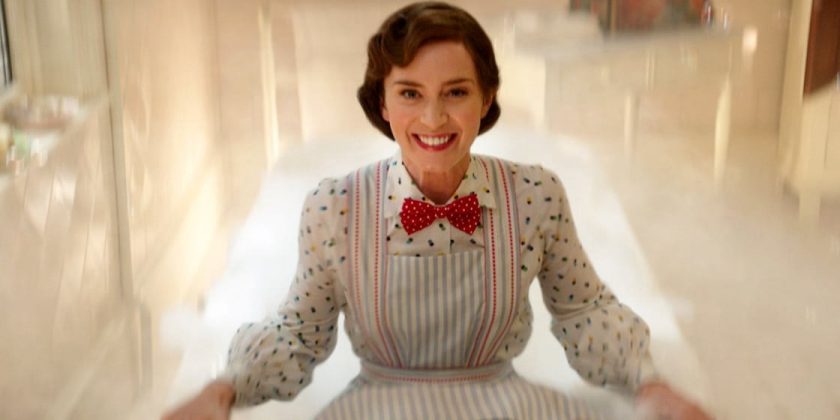 Emily Blunt is not the Mary Poppins I know. She only slightly resembles the woman who first wafted into our lives with a spoonful of sugar and a coat rack in her bottomless bag. She’ll never be the one and only Julie Andrews; it’s simply not possible. The new incarnation of Mary Poppins doesn’t have the original’s sense of strictness and order, favoring boldface fun and whimsy instead. She’s so changed that she now hangs out with a rapping lamplighter and casually makes cheeky double entendres while singing and dancing in wig that resembles the iconic coif of Chicago’s sensual siren Velma Kelly. Mary Poppins has changed, and for Disney purists, this realization may come as a shock, but I’m here to spread the word in the name of Mary Poppins Returns, change is very, very good. Mild spoilers ahead.

In fact, if we’re being honest with ourselves, change is, indeed, necessary in the case of the positively delightful sequel to the 1964 musical film. In our first jaunt with Mary, she was fantastical simply for existing. She flew onto Cherry Tree Lane on an umbrella, could speak to the parrot on its handle, slid gracefully down the bannister in the entryway, and trained toys to put themselves away in spectacular fashion. She broke rules slyly, while holding up the appearance and decorum of a prim and proper nanny.

Though she was the reason that the Banks children found themselves in fanciful garb in a cartoon world of anthropomorphic animals (and floating above a parlor room in a fit of laughter, and waltzing along London rooftops as a legion of chimney sweeps performed a Broadway-level dance number with Dick Van Dyke…), the children continually had to beg Mary to allow them to stay, participate, let loose. In each instance, it’s clear from the twinkle in her eye that she supports these whims and fancies, but she holds up her "practically perfect in every way" appearance at each turn. When the children make mention of her mystical powers, she feigns ignorance. She’s both what an English nanny should be, and the kind of nanny that sends stuffy Mr. Banks into a tizzy. She is incomparably sneaky and completely unexpected.

And at the time, this all made perfect sense — the need to uphold decorum while secretly letting imagination be her guide. That original film takes place during the Women’s Suffrage Movement, in the throes of first wave feminism (confirmed, of course, by the oft-forgotten early feminist anthem “Sister Suffragette,” courtesy of the children’s mother). Meanwhile, in the real world, the year was 1964, which lands the film itself right in the nascency of feminism’s second wave. Having secured the vote, women were gearing up to fight against other forms of oppression and inequality, and in Mary’s reality in the film, women were just beginning to fight to be heard and acknowledged as valuable voices in society. So, naturally, Mary can’t easily come charging into the Banks household with reckless abandon, starting her first day with the children by taking them on an undersea adventure in their bathtub, as she does in her first song in Returns, “Can You Imagine That?”.

Early Mary must be subtler, quietly inching her way to making her point and convincing Mr. Banks that perhaps his children shouldn’t be treated like miniature bankers bound by math and strict order, because they are, in fact, just children.

By the time we get to Mary Poppins Returns, little Jane and Michael are all grown up. Real life has hit them hard, with Michael losing his wife and much of the family’s livelihood, working part time at the bank that ruled his father’s life and running the risk that he and his children might lose the family home on Cherry Tree Lane. The Banks siblings are more progressive than their father was, more understanding that the world around them is changing — Michael is an unsuccessful artist, and Jane has devoted her whole life to activism in the vein of her mother, only she’s got her sights set on fighting for workers’ rights and safer working conditions. And having been forever changed by Mary Poppins, his formidable sister, and his beloved late wife, Michael, as the film’s patriarch, is well aware of the authority and wisdom of a woman like Ms. Poppins (and Jane, for that matter, as she swoops right in to aid him the second they find out that he might lose the house). No one here needs to be convinced that a woman could be the voice of reason in the room — they’ve lived it, they know it.

So the stage is already quite different when Mary Poppins returns. But then she finds herself among a trio of tiny adults, with Michael’s eldest twins taking on household tasks like grocery shopping (including creative budgeting with their pitiable funds) and looking after their younger brother, pushed into responsibility by the family’s hard times and the frazzled state of their father in the face of almost certain financial ruin. These children don’t need an air of order with only a tinge of whimsy — they need an avalanche of imagination.

They act as the emergency glue holding their household together — even their family housekeeper needs their help. The younger Banks generation needs a nanny who upholds that sense of responsibility while encouraging them to also be the children that they still are. They need someone a little looser, livelier, bolder. They need the version of Mary Poppins, who, rather than being slowly convinced to dance and sing after her pal Bert has begged and serenaded and complimented her for three entire minutes, only requires the mere suggestion of applause to don a stage look, hop on in front of a crowd, and croon lines like “he would read me lots of stories when he wasn’t on the sauce” before sliding into a cheeky cockney accent for the rest of one of the film’s best songs, “The Cover Is Not The Book.”

The rest of the film continues with a freer, topsy turvy version of the Mary we first met back in the ‘60s — where that Mary reluctantly joined in as the children laughed and floated in the air with her Uncle Albert, only to eventually cut the levity and levitation short, this Mary now brings the children into the upside down home of her cousin Topsy (Meryl Streep) and teaches everyone to simply go with the flow and look at the world from a different perspective. In the film’s requisite emotional ballad, she teaches the children how to cherish their mother’s memory, rather than buck up, keep calm, and carry on. And, naturally, the film’s big finish involves a Mary-led scheme to bend the rules.

So yes, this Mary is technically different. But, if you think about who Mary is and why she arrives when she does — flying through the London sky when she’s needed and disappearing back into the atmosphere when her work is done — this changed, updated Mary is actually the truest representation of the beloved character. She’s the right Mary in every situation in which she’s needed, and she’s always in the right. In the original, that Mary was a woman who appeared to tow the prim and proper line, and now she’s someone a bit more brazen. In fact, it is her ability to fill the needs of each situation that proves she is who she’s been claiming to be all along: A woman who takes charge, a woman who knows what needs to happen next, and a woman who is, in each disparate circumstance, practically perfect in every way.