EasyJet is moving fast in developing electric planes it can fly on short-haul routes, the airline’s boss has confirmed.

Chief executive Johan Lundgren claimed electric flying is ‘becoming a reality’ and he can foresee a future that is ‘not exclusively dependent on jet fuel’.

The Luton-based carrier is in a partnership with US-based manufacturer Wright Electric to build battery-propelled aircraft for flights of less than two hours by 2027.

Easyjet says it is close to developing electric planes to fly its short-haul routes. Pictured is an artist’s impression of how one of the planes could look

Wright Electric has applied for a patent on a motor for an electric airliner.

It already has a two-seater electric plane and plans to begin flying a nine-seater next year.

EasyJet believes the progress means an all-electric commercial passenger jet capable of flying passengers across its European network is ‘in sight’.

London to Amsterdam has a strong demand for day return trips and could be ‘an ideal route’ for the technology to be used.

Mr Lundgren said: ‘Looking forward, the technological advancements in electric flying are truly exciting and it is moving fast.

‘From the two-seater aircraft, which is already flying, to the nine-seater which will fly next year, electric flying is becoming a reality and we can now foresee a future that is not exclusively dependent on jet fuel.’

Wright Electric predicts electric planes will be up to 50 per cent quieter and 10 per cent cheaper for airlines to buy and operate, compared with traditional aircraft. 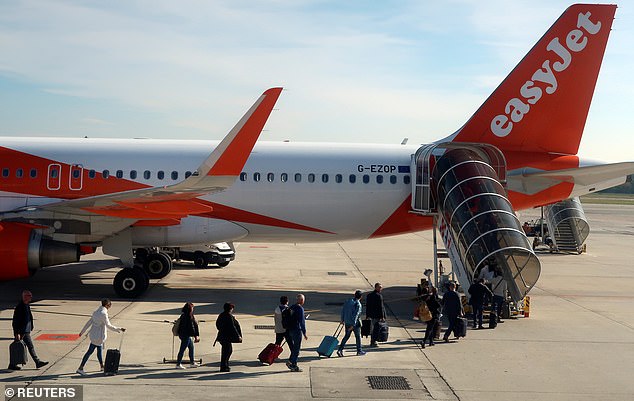 Conventional short-haul aircraft have one large jet engine underneath each wing, but electric planes would have several smaller motors. Pictured is an EasyJet aircraft in Milan

The company is focused on improving batteries and making the aircraft frame as efficient as possible for use with electric motors.

Conventional short-haul aircraft have one large jet engine underneath each wing, but electric planes would have several smaller motors.

Wright Electric chief executive Jeffrey Engler said: ‘We are excited about what the next year holds.

‘EasyJet has been a fantastic partner and we look forward to helping introduce low-emissions, low-noise aviation, to Europe.’