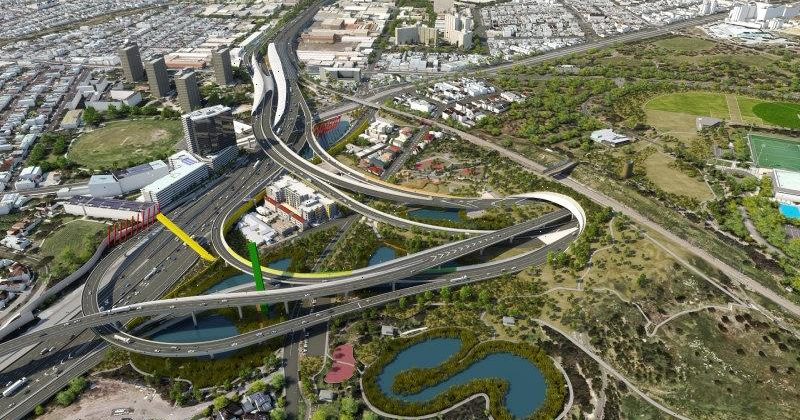 It is the Victorian road project that refuses to die.

Billions of dollars to build the East West Link will be included in the upcoming March 29 federal budget – two elections and more than seven years and after Labor torpedoed the road plan by announcing it would cancel the contract to build it. 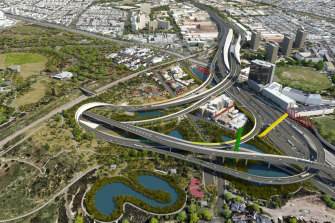 The original plan for the East West Link had it passing through Royal Park.

Treasurer Josh Frydenberg has confirmed $4 billion will once again be included as a “contingency” in the budget, to be handed to the first Victorian government prepared to deliver the road project, connecting the end of the Eastern Freeway in Clifton Hill to the Western Ring Road.

Mr Frydenberg’s spokesman said there has been no change in the Commonwealth’s long-held support for the road, and “there should be no expectation there will be”.

That means the budget papers will confirm that the government “remains committed to the construction of the East West Link despite the decision of the Victorian Government not to proceed with the project”.

The $4 billion on offer will not be deducted from the budget bottom line, but will rather be factored into the budget’s rainy-day “contingency resource” as a possible future outlay.

The state opposition has also once again thrown its support behind the road.

Shadow Treasurer David Davis said the Coalition had “always strongly supported the East West Link” and would continue to do so. He said the Andrews government’s North East Link road project – connecting the Metropolitan Ring Road at Greensborough with the Eastern Freeway at Bulleen – made the North East Link even more crucial.

“In principle, bipartisan support for the North East Link will funnel more traffic to the end of the Eastern Freeway, building the case more strongly for the completion of the missing East West Link,” Mr Davis said. “Daniel Andrews tore up the contract, squandering more than $1 billion of taxpayers’ money – a culpable and reprehensible step.”

The East West Link project has had long and troubled history. The broad idea has been debated over many decades, but it gained traction as a key recommendation of the former Labor Brumby government’s 2008 East-West Link Needs Assessment, headed by infrastructure guru Sir Rod Eddington.

After the Coalition’s surprise 2011 election win, the road looked like it might become a reality. But instead of building the western half first, as recommended by Sir Rod, connecting the Tullamarine Freeway to the Western Ring Road, the Baillieu government instead announced plans to start with the eastern half, with a tunnel linking the end of the Eastern Freeway in Clifton Hill to the Tullamarine Freeway in Parkville.

The problem was, the eastern half involved extensive tunnelling to avoid trashing inner-north suburbs, and expected traffic flows were relatively modest. 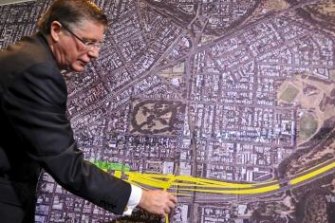 As Victorian premier in 2013, Denis Napthine unveiled his plan for the East West link design, but the project was scuttle when he lost the state election the following year.Credit:Wayne Taylor

Three months later the government prepared a new business case, this time including various other projects, including widening CityLink, the Tullamarine Freeway and the Eastern Freeway, and north-south tram and bus upgrades, to produce an estimated return of $1.40 for every $1 invested.

Then, shortly before the 2014 election, Labor explosively announced it would dump the project if it won, urging the project consortium not to sign up to a deal. The Coalition countered by signing a “side letter”, locking in generous compensation for the consortium if the project did not go ahead, even without a legal contract.

After winning in 2014, Labor stuck to its plan to dump the road, costing taxpayers hundreds of millions of dollars. Despite this, former prime minister Tony Abbott was adamant it should be built, placing funding for the project in a “locked box” in the budget, where it has remained since.

Transport Infrastructure Minister Jacinta Allan said it was time the Morrison government realised Victorians had comprehensively rejected the project as a dud.

“As the Andrews Labor Government continues to deliver our $80 billion pipeline of road and rail projects – we’re happy to work with the Commonwealth Government on projects that Victorians actually voted for,” Mr Allan said.

If Labor wins the federal election it is almost certain to dump the project. Federal opposition transport spokeswoman Catherine King said a Labor government would work collaboratively with the Victorian government, “not pick fights with them”.

“The sum of this government’s infrastructure commitments to Victoria seem to be a twice rejected road and rorted car park funds,” Ms King said. “Instead of spending another election campaign fighting about this project, the Morrison-Joyce government should get to work delivering the projects that will actually improve the lives of Victorians.”