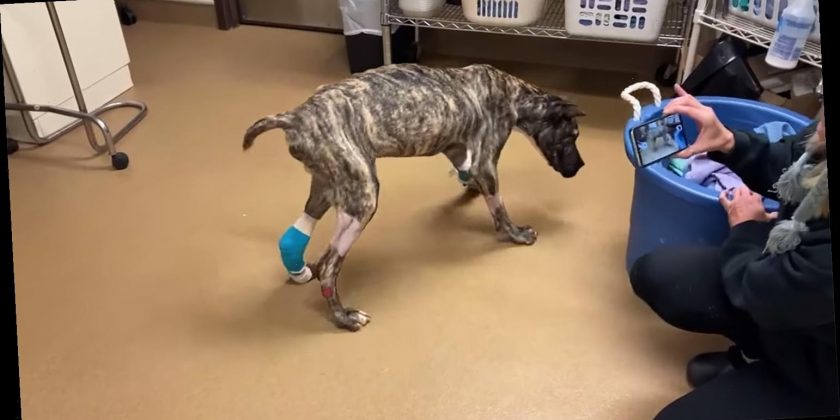 Ethan continues to prove that he is a fighter.

A week ago, the emaciated dog was found abandoned in the parking lot of the Kentucky Humane Society (KHS). Ethan weighed only 38 pounds — about 45 pounds shy of a healthy weight — and was too weak to lift his head when KHS took him in.

He spent several days at an emergency animal hospital, but is now back at KHS and making big strides — literally. The rescue shared on Facebook that the rescue pet recently took his first unassisted steps since being found in the parking lot.

"OUR BABY HAS TAKEN HIS FIRST STEPS! While he is wobbly and learning to use his legs again, this is huge progress and deserves to be celebrated. Less than a week ago, he was on death's door, and now he is finally able to walk a little again," KHS wrote on Facebook along with a video showing the canine walking on his own.

The rescue also used the post to thank Ethan's growing fanbase for their love and donations, ensuring his supporters that they "made this amazing moment possible!"

"ALSO! We've had lots of people messaging us asking about Ethan's age and breed. We think he may be a Cane Corso mix around 3-4 years old," KHS added in their post.

In a different Facebook post, the rescue shared an update on Ethan's weight. He now comes in at 59.4 pounds, which means he has gained 21 pounds over the past week.

While Ethan is undeniably getting stronger, happier, and healthier, it is still unclear how he ended up alone in a parking lot hours from death. Anyone who may have information about Ethan's past and how he ended up in the KHS parking lot, should contact Louisville Metro Animal Services at 502-473-PETS.

For continued updates on Ethan, and to donate to his care, please visit KHS' Facebook page.