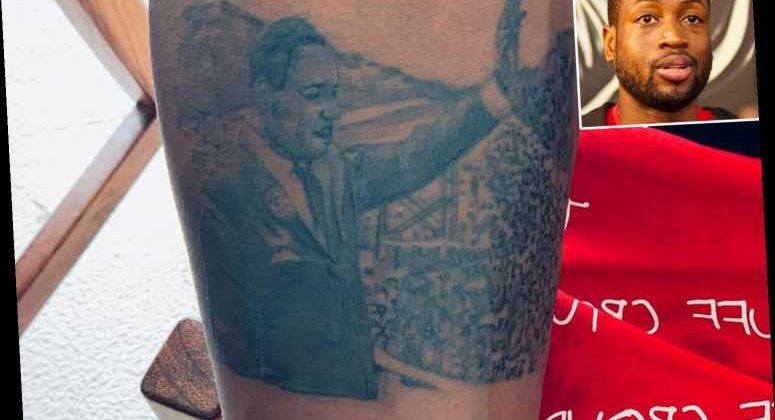 Dwyane Wade debuted a new tattoo on Friday commemorating the anniversary of the 1963 March on Washington led by Martin Luther King Jr.

"57 years ago to the date Martin Luther King Jr stood before a quarter of a million people from the steps of the Lincoln Memorial and spoke the words 'I have a dream,'" Wade, 38, wrote on Instagram, sharing photos of the fresh ink, which was done by tattoo artist Vanessa Aurelia.

"Thank you @nessaurelia for capturing this moment for me," Wade also wrote in the caption.

The athlete shared photos of himself getting the tattoo on his Instagram Stories.

Wade shared the tattoo on the same day that thousands of protesters walked in King's footsteps in a protest against police brutality and systemic racism.

Wade has been vocal in his support of the NBA players decision earlier this week to strike, which led to several playoff games getting postponed.

Thank you @nessaurelia for capturing this moment for me. 57 years ago to the date Martin Luther King Jr stood before a quarter of a million people from the steps of the Lincoln Memorial and spoke the words "I have a dream”

"Proud of our players! @Nba," Wade wrote on Twitter on Wednesday. "We fully support our players and the decision they made," the Bucks owners said in a joint statement, obtained by PEOPLE, after the players decision.

"Although we did not know beforehand, we would have wholeheartedly agreed with them. The only way to bring about change is to shine a light on the racial injustices that are happening in front of us. Our players have done that and we will continue to stand alongside them and demand accountability and change."

The NBA and NBAPA agreed to resume the playoffs on Saturday on the conditions that a social justice coalition featuring reps from players, coaches and governors will be immediately established, team arenas will be converted into voting centers for the upcoming election, and playoff game ads will include promotions for civic engagement, Bleacher Report reported Friday.

"To be able to start the Social Change Fund with two good friends of mine was big for all of us," Wade told PEOPLE in July. "But to be able to come together and understand that it's bigger than us, and hopefully our impact and our reach can help change so many different communities around the world. We wear it as a badge of honor."

"We see this everyday and it has to stop. It takes a village," Wade wrote on Instagram earlier in the day on Friday. "Right now, our village needs us. Help us do this together @socialchangefnd."