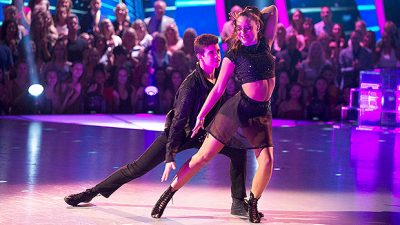 Another week, another eliminated star on ‘DWTS: Juniors’! This week, [SPOILER] was sent home, even though he landed at the middle of the pack based on judges’ scores. Here’s a recap!

First to take the dance floor on the Nov. 4 episode of Dancing With The Stars: Juniors was Miles Brown, along with his partner Rylee Arnold, who are mentored by Rylee’s sister, Lindsay Arnold. They danced a high-energy Jazz routine to “Space Jam,” and earned 9s from all three judges — Mandy Moore, Val Chmerkovskiy and Adam Rippon — for a total of 27. What a way to start the night, right?! They were followed by Mackenzie Ziegler and Sage Rosen, mentored by Gleb Savchenko, who danced a Cha Cha to “What If.” The routine also score a 27, with all three judges giving 9s once again.

Up third was Jason Maybaum and his partner, Elliana Walmsley, mentored by Emma Slater. Their Jazz dance to “It’s Tricky” earned 8s from Mandy and Adam and a 9 from Val, for a total of 25. Jason was followed by Akash Vukoti and Kamri Peterson, who are mentored by Witney Carson. They danced a Charleston to “Do Your Thing,” which Mandy and Val gave 7s and Adam gave a 6 — a total of 20. Sky Brown and JT Church went next, mentored by Alan Bersten. Their Samba to “The Greatest” scored a 23, with Mandy and Val giving it 8s and Adam giving it a 7.

Stevie Wonder’s son, Mandla Morris, danced next with his partner Brightyn Brems. They’re mentored by Cheryl Burke and performed a Cha Cha to “Perm.” Mandy scored it a 9, while Val and Adam gave it 8s for a total of 25. To close out the night, Ariana Greenblatt and Artyon Celestine, mentored by Brandon Armstrong, danced an incredible Jazz routine to “Rolex.” Val and Mandy gave it 9s, while Adam scored it with a 10 — the first ten of the season! Their total was 28.

Unfortunately, someone still had to go home, and this week, it was Jason and Elliana. Now, only six youngsters are left competing for that Mirror Ball!