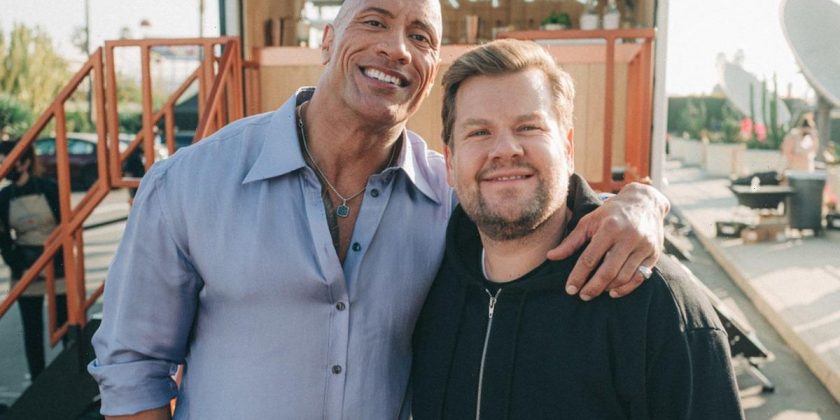 “I’m gonna level with you — straight up — The Rock got me drunk today,” Corden said.

Dwayne “The Rock” Johnson’s and James Corden have taken “Carpool Karaoke” to a new level.

On Wednesday’s episode of “The Late Late Show,” the “Red Notice” star and late-night host teamed up for an epic round of the beloved segment, however, instead of singing karaoke in a car, the two belted out songs while driving around the CBS Television City studio lot … in a golf cart. Johnson, 49, and Corden, 43, even took it up another notch by adding tequila, specifically The Rock’s Teremana Tequila, to the mix.

The clip began with Corden arriving at work, only to find that his parking spot had been taken over by a Teremana “mana mobile.” To Corden’s surprise, Johnson came out of the food truck, with Corden then asking him to move the vehicle. However, Dwayne said he’d prefer to “hang out” with James instead. So obviously, Corden canceled all of his meetings to hang out with his “best friend.”

The pair then embarked on an adventure and cruised through the CBS studio lot in a golf cart, with Johnson bringing along a glass of tequila. After first chatting about some legendary shows that were filmed on the lot, Dwayne and James arrived at where people were lining up for “The Price Is Right.” The two stopped the golf cart and got out to surprise the fans, who were dressed up in Christmas wear for a special episode. The crowd screamed and cheered in excitement.

After hopping back in the golf cart, Johnson and Corden continued their epic hang out — and it was time for karaoke. James put on a “classic” to start: Dwayne’s song from “Moana,” “You’re Welcome.” The two sang the track as Johnson has many times — but it was still as entertaining as ever.

Johnson and Corden then discussed the former’s beginnings in Hollywood.

“When I first started professional wrestling, I had seven bucks in my pocket,” Dwayne recalled, “and then when I got to L.A., I had a little bit more than seven bucks in my pocket, but the difference is when I got to L.A., that’s when I was told, ‘You can’t be as big. You got to lose weight. You got to go on a diet. You can’t call yourself The Rock. You can’t talk about professional wrestling.'”

“If you don’t know any better, then you buy into it,” he continued. “There was no blueprint when I first got here. So you either follow something that you think is the right thing to do or you say, f— it, I’m got to be myself and I’m going to create a new path and a new blueprint.”

Dwayne said his “turning point” came when he said he didn’t “want to remain on a lifelong diet just to be on the thinner side,” to which James replied, “Now you’re talking my language, go on.”

The pair then made stopped at the lot’s gift shop. Johnson grabbed some merchandise from various shows that film on the lot, including “American Idol” and “The Price is Right,” and hilariously didn’t grab any “Late Late Show” merch. It all seemed to work out though as Corden said he’d be charging the items to Drew Carey’s account.

Continuing on their cruise around the lot, Dwayne spoke about his rap debut on Tech N9ne’s track, “Face Off,” before proceeding to rap the verse.

After discussing what Johnson can maybe do next — possibly get into cooking ware? — the duo got “deep,” singing “How Deep Is Your Love” by the Bee Gees.

Dwayne and James concluded their adventure with a drink. While back at Johnson’s Teremana tequila “Mana Mobile,” the two made some delicious-looking cocktails. With their drinks in hand, Corden asked Johnson for some fitness and health advice, which ended up with James on the ground doing a few pushups.

“I’m a little lightheaded,” Corden said after. “I either need more tequila or less tequila.” The two ended their hang out with a cheers, before James then put his cocktail on Dwayne’s shoulders, joking that he likes “tequila on The Rock.”

Meanwhile, during his monologue on Wednesday night’s episode, Corden introduced Johnson, before sharing a funny tidbit from their adventure on the CBS lot. “Dwayne’s been here all day and I’m gonna level with you — straight up — The Rock got me drunk today,” James said, to which Dwayne joked in reply, “By the way, you’re still drunk, so it’s gonna be a great show.”

Johnson went on to sit down for an interview, during which he opened up about his journey with social media and reflected on being the most-followed American man on Instagram, saying it’s “crazy.”

“It’s been amazing. I got to tell you, the connection that we have has been one of the best things — if not the best thing — I’ve been able to do, I think,” Dwayne said of social media. “Period, across the board, in business, in Hollywood, outside of Hollywood, it’s been great.”

The wrestler-turned-actor also talked about his new film, “Red Notice,” including the time he ripped down his own front gate with his bare hands to get to set.

See more in the full interview, below!