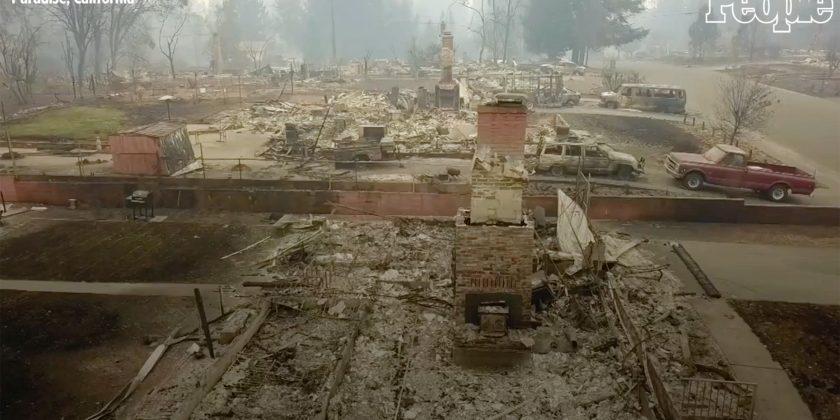 It’s been nearly a week since a massive wildfire broke out in Northern California, wreaking havoc on the once picturesque town of Paradise. Now, survivors of the blaze — dubbed the Camp Fire — are left to pick up the pieces in the town reduced to rubble.

Newly-released drone footage showed the once colorful town now consumed by embers and ash, with the remains of dozens of homes strewn all over the roads.The Camp Fire broke out in Butte County on Thursday, killing at least 48 people, burning through 130,000 acres and destroying more than 7,500 buildings, most of them homes, by Tuesday, CalFire reported.

“We’ve lost it all,” Paradise resident Cinda Larimer, 53, told USA Today. “My mother, she evacuated only took two outfits. Why? … We all thought we’d be going home today.”

As the Camp Fire continued to burn this week — it was still only 35 percent contained by Tuesday — abandoned cars lined the streets, power lines lay on the roads, and firefighters and search crews looked through the debris for the missing.

Mary Etter, 54, told USA Today that she does not know whether she’ll ever return to the ravaged town, but she’s thankful to have survived.

“I’m happy to be here, happy to be here and alive,” Etter told the publication. “The material things, we can replace those. They’ll be replaced. You can’t replace your life or your friends.”

Doreen Zimmerman lost her home of 29 years in the blaze, telling the Sacramento Bee that she doesn’t know if she and her husband will ever return to Paradise.

“Will I be able to sleep if I live there? I don’t know,” she said. “Paradise was such a way of life, and it is just gone.”

RELATED: See the Moment a Nurse Drives Through Flames to Help Patients During Deadly California Wildfire

On Wednesday, firefighters in Southern California were battling a new blaze that sparked overnight: the Sierra Fire.

The Sierra Fire broke out in Fontana, about 50 miles from downtown Los Angeles, and has burned through nearly 150 acres, according to NBC News. Fortunately, firefighters were able to gain some control over the blaze. Although no evacuations have been ordered due to the Sierra Fire, people rushed to flee their homes, backing up traffic in the area, according to the Los Angeles Times.