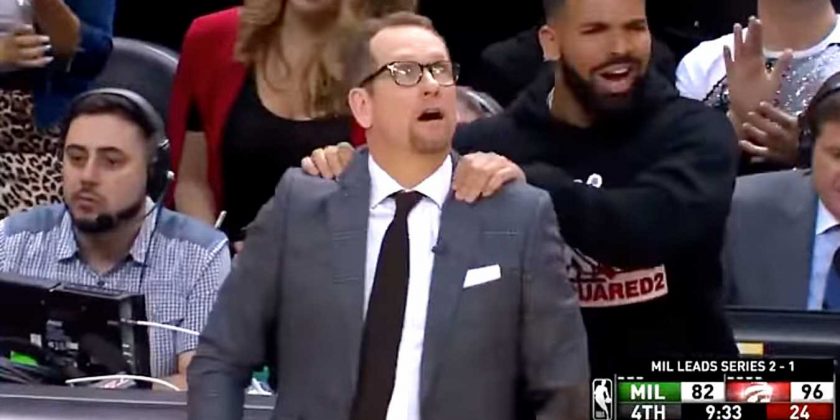 The rapper, 32, was extra animated in his support of the Raptors during their Eastern Conference game on Tuesday night against the Bucks and at one point, he gave Raptors coach Nick Nurse a quick back rub.

“I see it in some timeouts, but I don’t know of any person that’s attending the game that isn’t a participant in the game a coach — I’m sorry, a player or a coach that has access to the court,” Budenholzer said of Drake’s behavior during a conference call on Wednesday.

“There’s certainly no place for fans and, you know, whatever it is exactly that Drake is for the Toronto Raptors,” he continued. “You know, to be on the court, there’s boundaries and lines for a reason, and like I said, the league is usually pretty good at being on top of stuff like that.”

Georgios Dimitropoulos, who used to be Bucks forward Giannis Antetokounmpo’s agent, also criticized the “Hotline Bling” singer in a tweet that has since been deleted.

“Imagine a gig & an athlete on VIP seats, right next to the band, stands up on the stage just to show off during the entire game, knowing cameras are on him, occasionally even massaging the singer. Security&him both allow it. Never seen anything as disrespectful as this before…” Dimitropoulos wrote, according to Yahoo! Sports.

Drake posted to Instagram in response to the criticism on Wednesday.

The photo shows the Toronto native in a celebratory pose and is captioned with three emojis — “????‍♂️” — suggesting the rapper thinks his detractors’ reaction to his behavior is “salty” following his team’s win. A rep for Drake did not immediately respond to PEOPLE’s request for comment.

Before the Raptors and Bucks faced off, a Milwakee radio station announced it would pause playing any of the star’s hits until after the series.

“MAJOR ANNOUNCEMENT: Until the @Bucks beat the @Raptors – we are hereby taking a break from ALL #DRAKE music,” 103.7 KISS-FM announced on Twitter. “We love us some Drake, but right now – we love the #Bucks more! #BreakFromDrake #FearTheDeer.”

“Drake is from Toronto. Drake’s a big smack talker on the basketball court. I say until the series is over, we take a break from playing Drake,” the station’s morning show host, Riggs, said. “No more Drake ‘til the series is done.”

Drake might want to take it easy in his fandom, even if he ignores the critics.

After appearing in photos with Drake, several athletes have gone on to lose their games. Coincidence or not, the phenomenon has happened enough times to be dubbed the “Drake Curse.” Some soccer players have even been banned from posing with the “In My Feelings” singer until their season ends.

In another example, Arsenal F.C. player Pierre-Emerick Aubameyang enjoyed a Drake concert three days before a Premier League match that his team lost.

Drake has also been spotted supporting Serena Williams at tennis matches that she then went on to lose and hanging out with Connor McGregor before he lost a fight against Khabib Nurmagomedov in 2018.