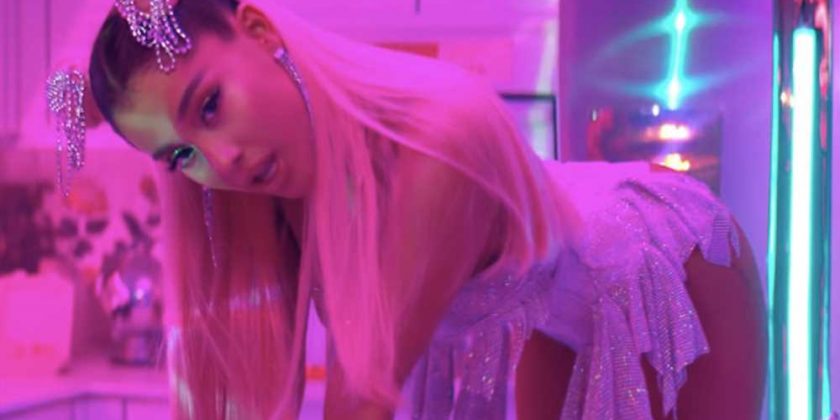 She wants it, she got it.

Just a few days after news broke that Ariana Grande is suing Forever 21 for allegedly using her lyrics, likeness and style to promote its products, “RuPaul’s Drag Race” star Farrah Moan is accusing the singer of similar behavior.

“Ariana should give me a cut of that 10M since her team literally sent a pic of me to the designer and paid them to copy my look from as4,” Farrah Moan tweeted on Wednesday, sharing a photo of herself in a pink wig and bedazzled bodysuit dress alongside a similar-looking still from Grande’s “7 Rings” music video.

Farrah also posted a since-deleted gif remix of the lyrics to say “Like my dress gee thanks just stole it,” and said that Grande’s designer, a fellow drag queen, was paid lots of money to recreate the look.

Grande’s stylist could not be reached, and a rep for the singer did not immediately respond to Page Six Style’s request for comment.

Fans quickly went on the offensive, recalling that Grande wore a similar sparkly outfit while performing at the 2014 MTV VMAs and that when the “7 Rings” video was released in January, Moan had tweeted “omg don’t be angry lmao if her or someone on her team actually took inspiration from something I did I would honestly die.”

The account called out that the board “features several images of @creepyyeha’s distinctive made-to-measure bondagewear, which Versace — despite having bondage in their house codes as well – seemed to have replicated with minor changes.”

“7 Rings” has proven particularly controversial since its release. When the song first came out, rapper Princess Nokia noted that the beat — along with the line about buying hair — reminded her of her own song, “Mine,” while Soulja Boy likened it to his own track “Pretty Boy Swag.”

2 Chainz also chimed in, saying that the video’s all-pink house and cars were reminiscent of his own “Door Swangin’” music video and “Pretty Girls Like Trap Music” album art. After the Atlanta rapper spoke out, however, Grande collaborated with him on a remix of “7 Rings.”

Grande, meanwhile, is taking her own complaints of trademark infringement to the courts.

According to a lawsuit filed by the pop star’s team on Monday, she is suing Forever 21 for $10 million, claiming that the company approached her about a potential partnership late last year, but that “the proposed endorsement deal never came to fruition because the amounts that Forever 21 offered to pay for the right to use Ms. Grande’s name and likeness were insufficient for an artist of her stature.”

After the deal fell through, Forever 21 then allegedly hired a Grande lookalike to model its clothes — including “7 Rings”-style embellished hair accessories and other outfits inspired by the video — and posted imagery and lyrics from the video on Instagram.