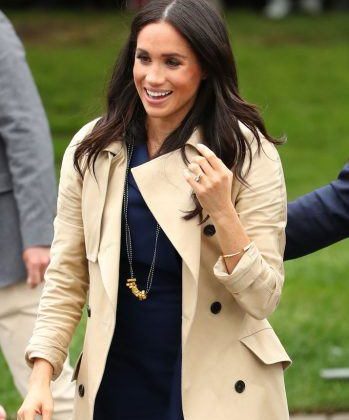 Now that Meghan Markle is a part of the royal family, she’s entitled to some pretty amazing royal perks. The United Kingdom pulled out all the stops for her wedding. And she went from being a network television star to being one of the most well-known people in the world. It wouldn’t be surprising if designers were offering their clothes to her in an effort to promote their own clothing lines. Plus, it would be an honor to have someone like Meghan wearing your clothes. But does the Duchess of Sussex get any of her clothes for free?

Meghan doesn’t shy away from expensive brands. She’s worn coats that were well over $1,000, and that’s on the lower end. When Meghan first stepped out alone with the queen, she was wearing a custom $18,000 Givenchy dress. She wore a $10,000 Dior dress to an event, and paired it with shoes and earrings that cost a combined $102,000. Meghan definitely doesn’t shy away from expensive clothing and accessories. She even had two wedding dresses, the first of which was a custom Givenchy that cost a staggering $135,000.

Everything she wears is out of the royal family’s pocket

It would make sense that designers would offer free clothing to the royals. After all, there is almost no bigger platform to promote a clothing brand than with the world’s most well-known family. But unfortunately, royal rules prohibit Meghan from taking any clothes for free. That means those custom Givenchy dresses were paid for out of pocket by the family. And Meghan was wearing strikingly expensive outfits even before she and Harry were married. The money from the clothes comes from Harry’s income, which isn’t as high as you might think. According to People, he drew all his necessary living expenses for the year from a fund of about $4.8 million.

The family cannot accept gifts — and that includes clothes

Assistants to the royals can call in outfits and get them sent to the family for free. However, once the winning outfit is chosen, the others are returned and the family purchases the chosen outfit, People reported. The royal family has a very strict gift-receiving policy. Most of the time, they aren’t allowed to accept gifts from anyone. There are exceptions, but designer clothes are not one of those exceptions. Every outfit you see Meghan sporting comes out of the royal family income. She does occasionally dress in affordable clothing, though.

But they can definitely afford to spend the money on clothing

The royal family may have to spend their own money to get the exact fashion looks they want, but they likely don’t think much of it. While Harry actually lives fairly modestly compared to others (if you want to consider $4.8 million to be modest), the royal family is worth billions. When you think about the price tag of Meghan’s dress (and the $46 million cost of their wedding) it makes sense that they don’t mind paying out of pocket.