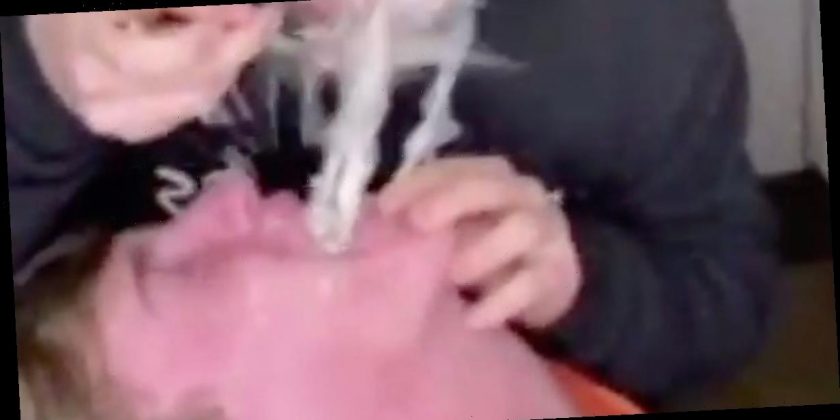 This gross video of people taking part in the so-called #cerealchallenge shows someone eating food out of a friend's mouth – before it all goes disastrously wrong.

In the challenge, one person lies on their back while their friend fills their mouth with breakfast cereals.

The friend then puts milk into their mouth and – in theory – tries to eat out of it with a spoon like a cereal bowl.

However, the gagging reflex usually kicks in and the volunteers start violently coughing the food straight back out as their body naturally tries to prevent them from choking to death.

In this video, a lad can be seen his filling his friend's mouth with cereal and then pouring in a huge volume of milk.

But when he bends over to eat the cereal, he gets a spurt of milk straight in his face and falls back laughing hysterically.

The viral trend has even appeared on Instagram, with people eating out close pal’s mouths in a bid for social media likes.

In one clip, a commentator compared the challenge to the torture method of waterboarding – where water is poured over a cloth covering the breathing passages to simulate drowning.

They wrote: "Instead of getting waterboarded he got milkboarded."

Meanwhile, Twitter users were asking for advice on which cereal to use for the challenge.

"Someone’s gonna choke to death with that #cerealchallenge," a concerned person said. The trend also carries a chance of food going down the “wrong way” which can lead to a chest infection such as aspiration pneumonia, according to the NHS.

On the website, it states: "Aspiration pneumonia can develop after accidentally inhaling something, such as a small piece of food."