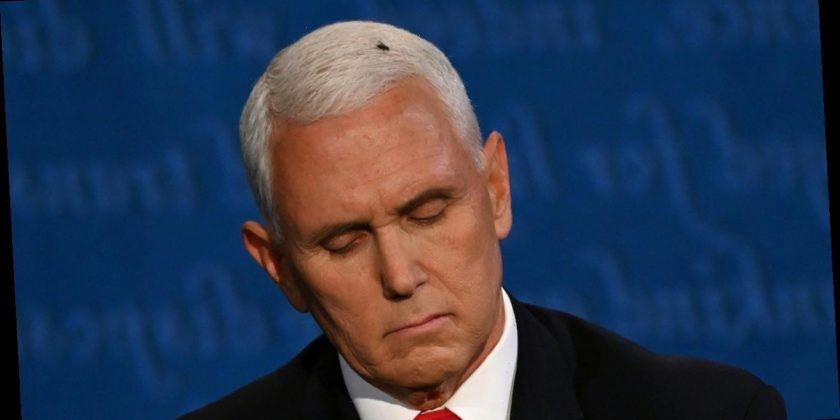 As Mike Pence and Kamala Harris faced off at the vice presidential debate, a fly landed in Pence's hair and remained there for what felt like forever. During an exchange between the current Republican vice president and the Democratic nominee to replace him, the insect lingered as Pence and Harris discussed systemic racism and law enforcement.

“This presumption that you hear consistently from Joe Biden and Kamala Harris that America is systemically racist, that as Joe Biden said, that he believes law enforcement has an implicit bias against minorities — is a great insult to the men and women who serve in law enforcement,” Pence said, a fly landing on his head. It remained as Pence pledged the Trump administration's support for law enforcement and Pence went over his speaking time.

A fly lands on Vice President Pence during #VPDebate. pic.twitter.com/i0O2K6N9Yy

Pence rewatching #VPDebate  tonight and seeing the fly on his hair:

At least the fly knew there was a 2 minute limit pic.twitter.com/t9e3bbsw6k

The moment came at the first and only vice presidential debate of the 2020 presidential election campaign.  Harris and Pence's showdown comes after last week's chaotic first presidential debate,  an event that has been further complicated after President Donald Trump tested positive and was hospitalized for COVID-19 amid a larger outbreak in the White House and Washington. It's still unclear if the president might have been contagious at the event based on uncertainties about the timeline of his illness.