The Australian book industry has emerged in a bullish mood after two nerve-jangling years negotiating the impact of the global pandemic. And even an economy facing fresh pressures from rising interest rates, low wage-growth, rampant inflation and a possible recession doesn’t appear to be shaking the confidence of publishers and booksellers.

On Thursday evening the industry celebrated its robust survival of lockdown, closures, cancellations and supply chain issues by presenting its annual awards at a glitzy bash in Sydney. Books, after all, keep being written, published, sold and read.

It was a year for first novels: Diana Reid, named a best young Australian novelist by The Sydney Morning Herald in April, not only won the literary fiction book of the year award for Love & Virtue, but her acclaimed novel about power dynamics and relationships among a group of students was named Australian Book Industry Awards’ (ABIA) book of the year. Jacqueline Bublitz’s suspenseful debut, Before You Knew My Name, won the general fiction award. 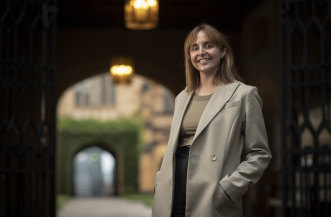 Louise Stark welcomed the impact of BookTok on sales.Credit:Tim Bauer

Australian Publishers Association vice president Robert Gorman, chief executive of Allen & Unwin, said book sales had risen by 11 per cent in 2021 compared with the year before the pandemic. There had been a further 5 per cent jump in the first five months of this year.

“The industry has taken enormous confidence from what has happened. People chose to read books in a way I was thrilled by.”

And Hachette chief exective Louise Stark said the emergence of BookTok – a growing community of teenage book lovers on TikTok –had helped bring new readership into the shops, significantly boosting trade and introducing a whole new generation of readers to reading.

She said despite a slight softening of the market this month – often the case in June, apparently – “we have won back a lot of lapsed readers”. Nor did she seem fazed by the prospect of recession: “From history we can see that books have been resilient. They provide hours of entertainment and are one of the last things that people give up.”

Nevertheless, she said the supply chain had been “hideously disrupted”, which had proven expensive. As a consequence, Hachette had doubled the quantity of books it prints in Australia. “But so have other publishers, and printers are now struggling with capacity. There are paper shortages around the world.”

She echoed the concerns of Robbie Egan, chief executive of the Australian Booksellers Association, who said bookshops in Sydney and Melbourne CBDs were struggling because of the numbers of people working from home. “But the weekend trade is extremely strong.”

Egan relished the strong sales growth and welcomed the gradual diminishing of supply chain issues, but said staffing was still a problem. Election campaigns were usually a drag on trade, he said, but that had not been the case this year.

“Generally, the industry is holding up well and feeling positive. We have laid bare the fallacy that online is the only way to buy books. Once we were able to open up, sales at bricks-and-mortar shops bounced back. Now we are beginning to get big books for the last quarter of the year and these are the tent-pole titles that you know are going to sell thousands of copies.”

But Chris Redfern, whose Avenue Bookstore in Albert Park was named bookshop of the year, said he felt there was still a lot of angst in the book-selling community, with staff being impacted by COVID-19 and customer behaviour.

“My perspective is that publishing did quite well, but retailers have had a tough time. Trade is pretty up and down.”

While he was reluctant to use the term “post-COVID”, he did identify “a sense that we’re moving into a new era. There is a sense of optimism, an indication that things are getting better, but not a ‘things are all over’ scenario’.”