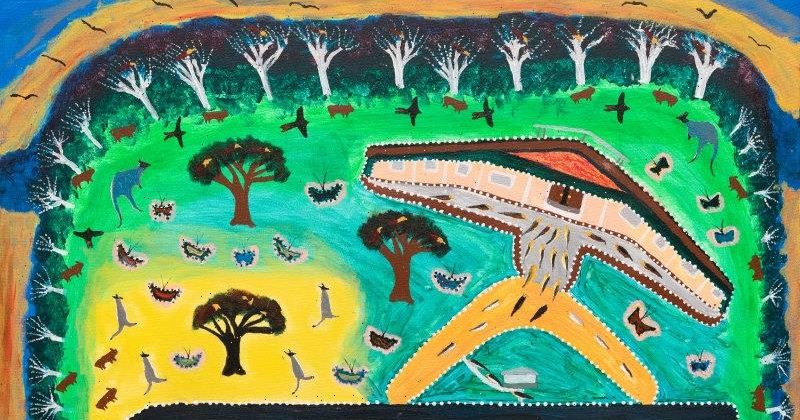 Warning: This story contains a photo of an Indigenous person who has died.

When curator Sophie O’Brien visited Wollongong Art Gallery last year for the first time since lockdown she was drawn to a brightly coloured work with a unique, naive style she didn’t recognise.

Called Billabong, it had been painted by Reuben Ernest Brown – an artist O’Brien had never heard of.

She was impressed with “the layer cake arrangement of colour” and “the simple structure made complex by the inclusion of so much flora and fauna”. Most of all, she was struck by “the sense of joy of living in the natural world” the artist had conveyed.

She discovered Reuben Brown, known to his Indigenous Yuin family as “Uncle Ben”, had been born in 1928.

As a youngster, he suffered polio, which entailed a long stay in Nowra hospital. When released he was returned not to his natural parents but to another couple (the details are clouded). 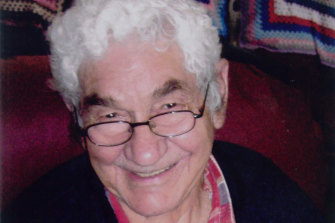 Reuben Ernest Brown began painting only after he retired.

Consequently, he grew up in north Nowra, the centre of the boomerang-shaped coastal country of the Yuin people.

Brown worked as a labourer for most of his life in the sawmills of the Shoalhaven or for the local water board. He and wife Mona had 10 children, and lived in towns along the south coast of NSW, though mainly Nowra.

When he retired in 1993 both he and Mona enrolled to study pottery and painting at Bomaderry TAFE.

Two decades on, a selection of Brown’s paintings are being exhibited as a group for the first time in a show called The River and the Sea, curated by O’Brien. 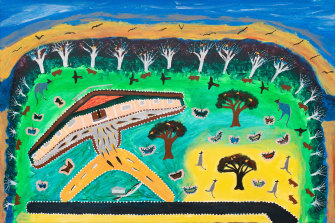 The show is hung at the new architectural award-winning Bundanon Art Gallery overlooking the Shoalhaven River – an addition to the vast 10,000 hectare property Arthur and Yvonne Boyd bequeathed to the nation in 1993, six years before Arthur Boyd died.

In the adjoining gallery some of Boyd’s greatest works are on display in Landscape of the Soul curated by Barry Pearce, emeritus curator of Australian Art at the Art Gallery of NSW.

Boyd and Brown were neighbours and contemporaries, though there’s no evidence they ever met. Brown died in Berry in 2009, 10 years after Boyd. 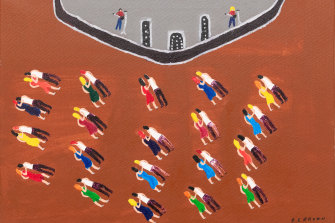 Brown’s descendants were ecstatic when they learned their relative was not only being awarded his first exhibition in a public gallery, but alongside a world-famous artist who loved the Shoalhaven as much as he did.

“I invited Uncle Ben’s daughter, Pauline to come to the gallery for a preview,” O’Brien recalls. “Nine people turned up, including grandchildren. They brought Uncle Ben’s paintboxes and newspaper clippings, mainly about his activism and involvement in setting up NAIDOC week rather than his painting.”

So what makes Brown’s work worth exhibiting?

“It’s not topographical like a lot of other Aboriginal painting from other parts of Australia,” O’Brien says. “His paintings show the Shoalhaven: the sunsets, the hills, the waterways, the fish and the birds which define this region. Plus the ocean, full of things that can sustain a family. 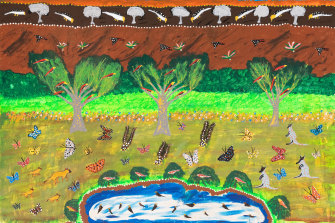 “Black cockatoos – which Nowra is named after – are central to all his paintings. And they often feature family gatherings: picnics, holidays, games of volleyball.”

Yet loss remains at the core of Brown’s work, O’Brien says. “The thing that makes Uncle Brown’s work special is that it is very much his own voice. For the first 13 years of his life, he was part of the stolen generation. That disconnection from county and culture meant he had to find his own way forward.”

Parallel Landscapes, three exhibitions including The River and The Sea by Reuben Ernest Brown, Bundanon Art Gallery until November 6