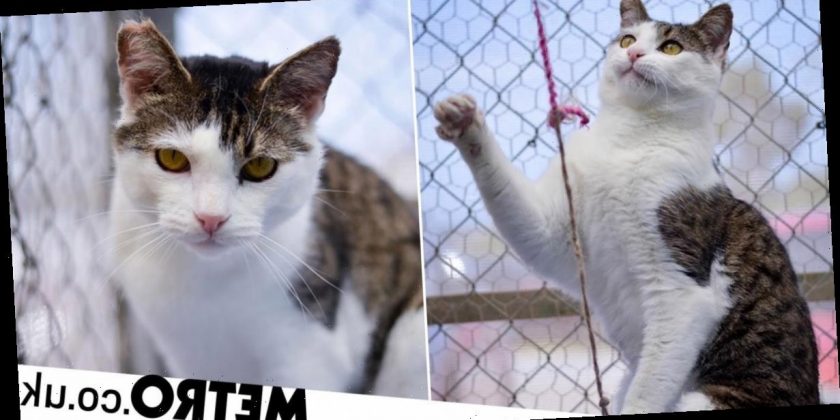 One of Australia’s grumpiest cats has found a new home – just in time for Christmas.

Known for his ‘demonic’ nature, Chester has been taken to the RSPCA by four different families in the past seven years.

Despite his unfriendly attitude, workers at the animal shelter were still determined to find Chester a loving home.

The anti-social eight-year-old kitty – who was described by his last owner as ‘a real Dr Jekyll and Mr Hyde’ – will be living with a new owner called Wilma.

On the surrender form given to the animal shelter, the previous owner wrote that while Chester was ‘great with chickens’ and ‘tolerates the dogs’, he still ‘attacks our old cat and the neighbours.’

Some neighbours wouldn’t even enter the property unless the moggy was locked away.

Chester has been in and out of animal shelters his whole life, first coming to one when he was just one year old, after being found as a stray.

Following that, Chester lived at his new home for six years, but his owner was forced to surrender him when he went into a care home.

Afterwards, Chester only lived with his new owners for two weeks and his grumpy nature started to emerge.

RSPCA’s media relations manager, Carolyn Jones, said: ‘The last report card was particularly surprising. He was with a lady and family that had a lot of experience with cats and he was a bit of a nightmare for them by the sounds of things. You know, making it a little difficult for them to have guests around and certainly not making it too pleasant for the old cat that lives with them.

‘She thought she would be able to manage it and unfortunately she couldn’t but she did give it a red hot go.’

But despite his ‘bad boy’ reputation for bullying other cats and his miserable attitude, Chester still won over the hearts of employees at the shelter.

Speaking affectionately of the cat, shelter staff member Jenny Sherring said: ‘He is so chatty, he sees people, comes up to them and chats to them straight away. He can be really affectionate when he wants to sit on your lap, but then when he’s had enough he will simply leave you alone.

‘With Wilma, I feel confident that he’s going to get all the attention he wants – and no more. That’s a perfect outcome.’