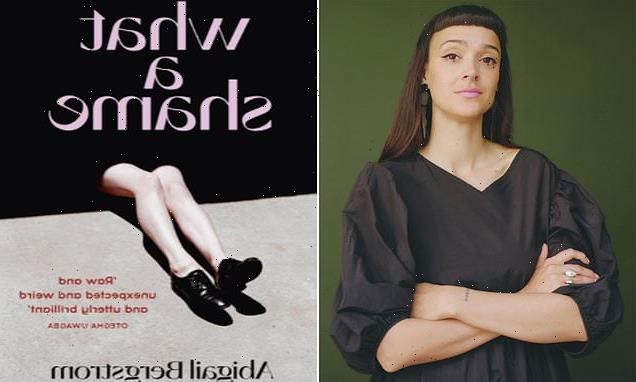 It’s no Eat, Pray, Love! What A Shame tipped to be THE hit book of 2022 sees a woman get over a breakup via casual sex, witchcraft and drug-fuelled ritual where you vomit and ‘s*** yourself’ in front of 13 strangers for two days

A darkly comic satire published today about a troubled millennial woman desperate to banish a ‘curse’ inflicted upon her by any means necessary is tipped to be the novel of the year.

London literary agent Abigail Bergstrom’s debut novel, What a Shame, follows woman spiraling out of control after a the death of her abusive father and a painful breakup with her boyfriend.

The 20-something protagonist, Mathilda, self-medicates by smoking, drinking and taking cocaine with her toxic lover, Freddie, and finds herself sneaking home from parties where she secretly self-harms.

Concerned about her tumultuous life, her friends enlist a ‘voodoo priestess’ who claims Mathilda is the victim of black magic and should undo the curse through various unorthodox spiritual practices.

Her spiritual journey sees the protagonist burn possessions after bathing in a witchcraft potion made of herbs and goat milk and visit a psychic tarot reader who warns her against the men in her life.

The book cumulates in an intense two-day ayahuasca ceremony – which involves travelling to Italy to copiously vomit and ‘s*** yourself’ in front of 13 strangers and a shaman . 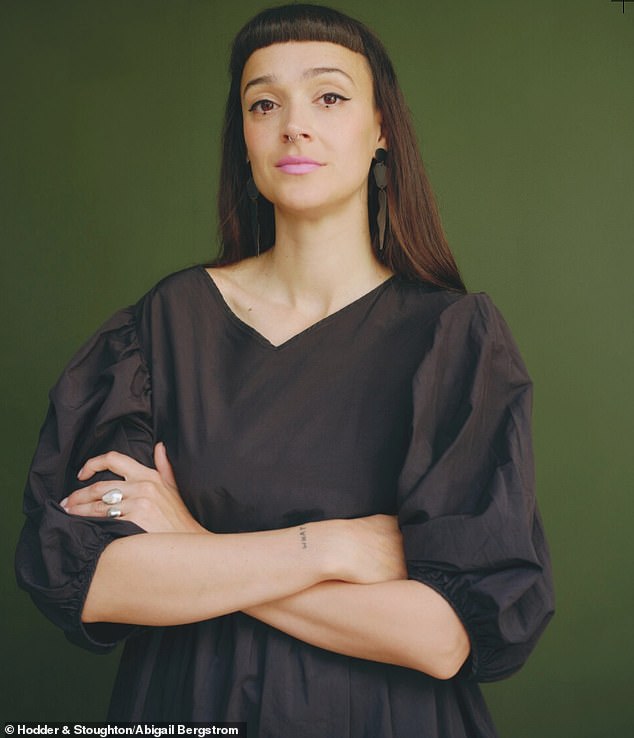 ‘I can hear people vomiting – a deep sickening feeling overcomes me. I start to feel balls of energy, like wool tangled in the back of my throat, making their way to the surface, and my skin tingles everywhere. I start to vomit, and time gets lost’, writes Bergstrom.

Mathilda is a typical millennial who works a freelance advertising creative for a predictably trendy agency called Hatch, where ‘man-buns’ speak over her and take credit for her ideas.

Her housemates have grown tired of her constantly having ‘cosmic’ casual sex with the hugely unlikable Freddie – a ‘tw*t’ who refuses to settle down ‘when there are so many beautiful women to sleep with and parties to get high at’.

‘Outside our hook-ups, Freddie’s sex life is more mesmerising and colourful than the Great Barrier Reef – at least from where I’m swimming. It’s a site of remarkable variety and beauty, bustling with girls – all thinner and significantly sexier than I am’, writes Bergstrom.

While her ex-boyfriend doesn’t have social media – she routinely obsesses over the profile of Olivia Wool, the one mutual friend she and her ex share, who appears to have the perfect life on Instagram.

Mathilda and her friends take part in ‘women’s sessions’ – where they bare their souls over candles around the crystals – and in one session unearths a disturbing memory of non-consensual sex with Freddie during a coke-fuelled night out.

In one harrowing chapter Mathilda disassociates while cutting herself after leaving a party alone – having become ‘crippled with humiliation’ after asking Ivy whether she thought her ex would eventually come back to her.

With her housemates growing increasingly worried, Eden enlists the help of ‘voodoo priestess’ who believes Mathilda may have had a curse put on her.

Extract from Abigail Bergstrom’s What a Shame

I am on my knees craning over a bucket, rocking my body back and forth as I retch, hitting the plastic bottom with brown, watery bile. More and more coarse balls of wool make their way up my oesophagus as I convulse and spit and heave.

It comes and it comes. The sensation is relieving. The purge feels good, filling me with a sense of purpose. I look down and my hands are the size of a baby’s, chubby and curled, and when I look up I see that I’m tiny, sitting in a large cot. You’re here too. There is anger and fear, which I absorb. This happens more than once. I look down at the hands of my childhood self and resume a memory from my past, consumed with the disappointment of you.

I heave and quiver until I vomit again, dispelling the pain, then collapse lifeless onto the mattress until the next wave comes. This experience is relentless. It rolls over me again and again, another memory, another purge.

I think this goes on for several hours. The next thing I know, I’m looking into the eyes of the shaman, who is kneeling in front of me, singing a haunting melody, which unearths a pain so deep it seems pointless to relay it in words. I cry uncontrollably and unashamedly, rocking in harmony with his melancholy song. There it is again: release. I roll as a weight pushes my head down into my pillow. I cannot move.

‘She said there’s some sort of curse on you’, says Eden. ‘A strong curse. It’s something from your past but it’s still affecting you now. She could see it. She said it’s all over you. It’s in your hair and in your mouth and your ears – it’s clinging to you. She said you were happy once, really, really happy, but you’re blocked and this thing, this curse, you need to deal with it.’

In a bid to rid her friend of her curse, Eden sends a a £39.99 kit from VoodooHand.com complete with ‘spell supplies, tools and other witchcraft provisions, to her office.

After her first cleansing bath- which ignited a need in Mathilda to spontaneously set fire to a Sylvia Plath poetry collection –  she decides to try a tarot card reading under the influence of Ekua.

During the reading, which takes place on a canal boat in Hackney, Mathilda receives the devil and death cards, with he psychic claiming she is still suffering from the ‘violent and aggressive’ masculine figures within her life.

On her spiritual retreat Mathilda hopes to finally find peace and discover why she feels so incapable of moving on.

With vast critical acclaim ahead of it’s release, the book has been hailed as ‘full of heart, wit and feeling’ by Promising Young Women author Caroline O’Donoghue, while being dubbed ‘Fleabag with a sprinkling of the occult’, by the Sunday Times’ Laura Hackett.

‘Writing this book has been such a painful, gratifying and ultimately exhilarating experience’, Bergstrom told the Bookseller. ‘I wanted to write a female character who was disarming and relatable in equal measure.

‘A character who would scratch at the madness that lies immediately beneath our skin. One who has both light and dark within them. One who would make me laugh.’

Early reviews of the book saw readers heap praise on the ‘brilliantly, funny and heart wrenching’ novel, comparing Bergstrom’s work to that of established writers like Caitlin Moran and Dawn O’ Porter. 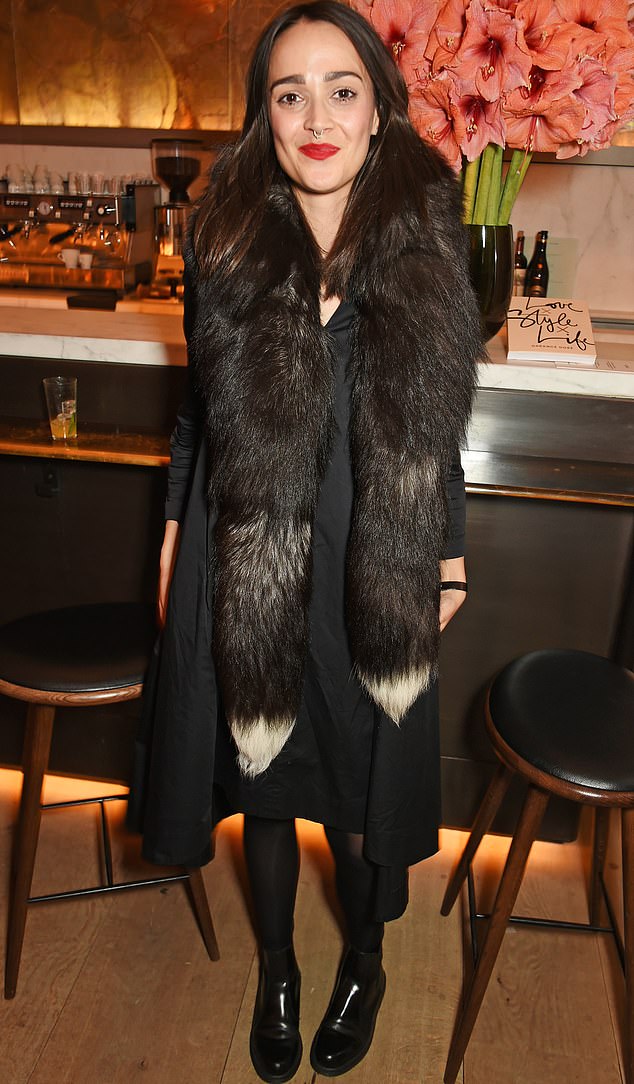 Author Bergstrom represented esteemed-feminist writers Florence Given, who penned Women Don’t Owe You Pretty and Every Day sexism founder Laura Bates while working as a literary agent for Gleam Titles

‘This read will make you cry laughing, and laugh from crying. And any difficult issues are dealt with sensitively, which makes it a much easier read than you might expect’, reads one glowing review.

‘I’m sure it won’t come as any surprise when I give this fabulous debut fiction novel a solid five stars. For certain, I’ll be looking out for more books from Abigail Bergstrom’.

‘Utterly brilliant’, wrote another. ‘I needn’t really say more than that, but I’m going to. What a Shame is an impeccable debut. It is wickedly funny; a perfect piece of prose for the Fleabag generation.’

‘A beautiful, raw story of self-acceptance and shame that haunted me until I finished the last page. Reading Abigail’s debut captured the pain and release that comes with laughing at a funeral. I swallowed the story in big gulps and will push it towards my friends. An ambitious, beautifully balanced novel that manages to strike laughter and heartache in equal measure’, read a third.

What A Shame by Abigail Bergstrom is available from February 3rd, Hodder & Stoughton, £14.99