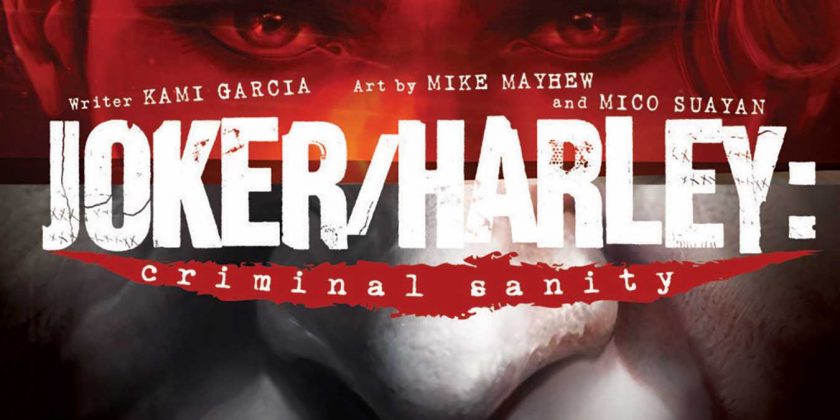 Harley Quinn and the Joker have one of the most complex relationships in modern superhero comics. Originally created as a henchman for the Clown Prince of Crime on Batman: The Animated Series, Harley has since evolved into her own vibrant and popular character — but still retains a powerful connection to Mr. J. That relationship will be examined from a new angle in Joker/Harley: Criminal Sanity, a new comic series from DC’s Black Label imprint.

First announced at DC’s BookCon panel on Sunday in New York, Joker/Harley: Criminal Sanity imagines a Gotham City where Harley Quinn is a forensic profiler who helps the police catch deranged criminals. She soon ends up on the trail of the city’s most infamous serial killer of all, the Joker – who once killed Harley’s roommate. So, don’t expect a lot of romance in this version of the relationship. The series will be written by author Kami Garcia (co-author of Beautiful Creatures) and illustrated by Mike Mayhew and Mico Suayan.

“There is no character more terrifying than the Joker. He is one of the most complex psychopathic killers ever created,” Garcia said in a statement. “I wanted to approach the project as if  the Joker was a real person—an intelligent and sane psychopath, who kills because he wants to, not because he suffers from delusions. To me, a version of the Joker, who is sane like John Wayne Gacy or Ted Bundy, is more frightening. In the series, Harley is the only character with the skill set and intelligence to hunt the Joker, but the investigation will force her to confront her own inner demons.”

Joker/Harley: Criminal Sanity will be a nine-issue limited series; the first issue lands in stores Oct. 2.

But that’s not all the DC graphic novel news out of BookCon. While Black Label is the publisher’s new mature line, DC Ink is their new line for YA graphic novels. DC released a new trailer for Teen Titans: Raven, which is also written by Garcia and illustrated by Gabriel Picolo. Raven hits stores on July 2, and will contain a preview of Teen Titans: Beast Boy, out next year from the same creative team.

Watch the trailer above, and check out covers for these upcoming comics below.