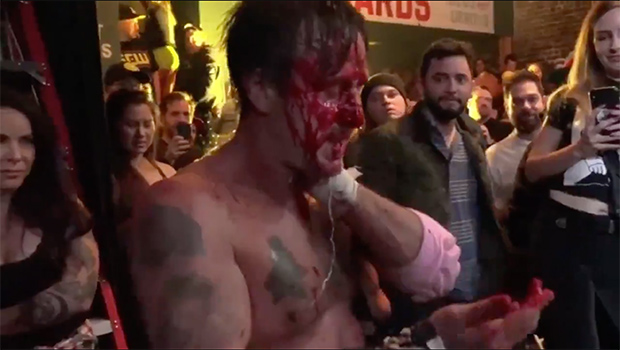 David Arquette might want to think about retiring from fighting, as the ‘Scream’ actor turned into a bloody mess during a match at Joey Janela’s LA Confidential on Nov. 16.

Was this a real-life fight or another sequel in the Scream movie franchise? Surprisingly, it’s the former, but considering how much blood David Arquette, 47, lost in this new fight video, we would have guessed it was the latter without knowing all the information. But alas we do, and now we must share with you. David, who’s a former WCW champ, engaged in a match against deathmatch wrestler Nick Gage on Nov. 16 at The Hi-Hat in Los Angeles, and the entire fight aired live on FiteTV.

Graphic videos quickly spread across Twitter, following the match-up, and the footage shows David and Nick’s violent encounter, which included a bunch of dangerous weapons and stunts. In one shocking clip, David is shown dropping Nick into a pile of folding chairs. And in another, Nick can be seen trying to scalp David with a pizza cutter. Yes, a pizza cutter.

Then, after David got hit with a light tube, he could be seen immediately grabbing his neck. But despite his gruesome injury, he continued the fight against Nick. And by the end of the match-up, he was covered in blood. That’s when David was reportedly rushed to the ER by fellow actor Luke Perry, according to Pro Wrestling Sheet. After his brief hospitalization, David took to Twitter to say he had been “stitched up”. Then, he added, “Turns out Death Matches aren’t my thing.”

David, who’s more famous for his acting roles and highly-publicized relationship with ex-wife Courteney Cox, has dabbled in wrestling before. He even became the WCW World Heavyweight Champion in 2000. It was this past September, that he felt a comeback to the professional wrestling ring would be fun. “I literally feel like I’m Rocky, I mean like I’m in the gym sweating like crazy going to the gym every day for hours, you know, getting it so I don’t get winded so easily and putting on muscle losing a bunch of weight so it’s all about training, it’s all about determination, it’s all about, you know, believing in yourself,” David told Fox News.