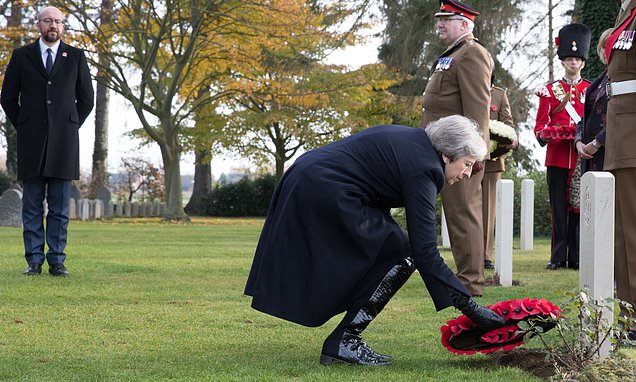 DAN HODGES: Only Mrs May’s heard the real voice of Britain – ‘Get on with it and get us out’

The clock has finally run out. ‘If we don’t get a deal signed off in principle next week, then we have to move ahead with No Deal,’ the Cabinet Minister explained.

‘November 15 is the final date we can place the order for ships to bring in the necessary supplies. The stockpiling of the medicines has to begin around then as well. We also need to start construction of a new border post at Dover.’

Theresa May has faced many dark moments during her premiership. But this Remembrance Sunday she is staring down into her own political Valley of Death.

She can drive ahead, in the face of growing opposition among her Cabinet, MPs and party activists, and conclude a Brexit deal that will push her Government and parliamentary majority to the brink. 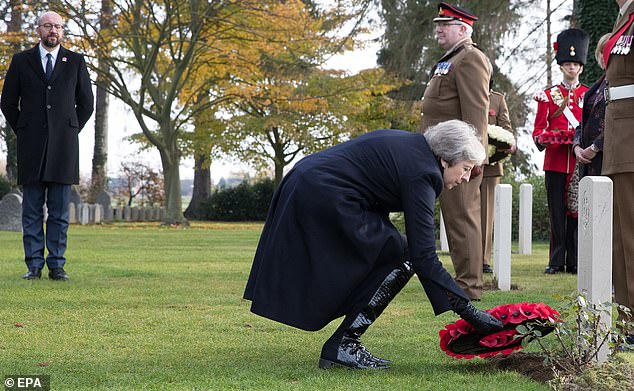 British Prime Minister Theresa May lays a wreath watched by Belgian Prime Minister Charles Michel (L) during a commemoration of the 100th anniversary of the end of the First World War. Mrs May has faced many dark moments during her premiership. But this Remembrance Sunday she is staring down into her own political Valley of Death, says Dan Hodges

Or she can turn away, abandon Chequers and deliver the nation to the tender mercies of a no-harness, cliff-edge leap out of the EU.

From Downing Street the official line is one of measured defiance. ‘We want to get a deal done this month if we can,’ an official explains, ‘but it needs to be a good deal and, it has to be one that is politically sustainable.’

But behind the scenes there are clear signs the Prime Minister is preparing a lonely, gallant gallop towards the sound of the guns. Over the past few weeks she has been presented with an ever-growing series of red lines from her opponents. And Mrs May is preparing to ride roughshod over all of them.

Quotes of the week

‘Why is he not here? There isn’t one law for the famous and one for the rest of the community.’

Prince Charles drops the Queen’s English for pidgin during a trip to Nigeria – it means ‘always look on the bright side of life’.

‘I’ve always been Granny Spice with biscuits in my handbag.’

Geri Horner ditches her Ginger Spice nickname as the band reunites for a UK tour. 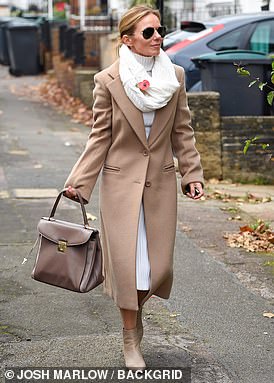 Granny Spice is pictured in London

Susan Orfanos, after her son was among those shot dead at a Californian bar.

Tory MP Nicky Morgan’s reaction after Brexit Secretary Dominic Raab said that he ‘hadn’t quite understood’ how reliant UK trade was on the Dover-Calais route.

‘I know my Trotskyites well and I know you don’t want to be invested in the UK if a Trotskyite is Prime Minister.’

Financier Steve Eisman warns of a crisis if Jeremy Corbyn makes it to No 10.

‘We live in a time when you can change your name and gender. Why can’t I decide my age?’

Emile Ratelband, 69, who wants to officially become 20 years younger due to discrimination. 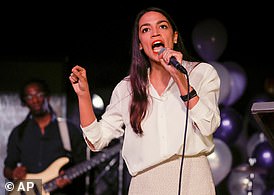 The details are mind-numbingly opaque. But they essentially involve rejection of calls for a rigid and unilateral process for exiting the so-called ‘back-stop’ in the event the final details of a new customs arrangement take time to be hammered out. ‘The problems with any deal other than Chequers remain,’ a May ally says uncompromisingly.

She is right not to compromise. The time for obsessing over the arcane minutiae of Brexit is over. Unless a deal is concluded, in a week’s time, Britain will move on to a war footing. Contingency plans will be activated to ensure transportation and warehousing of emergency food, medicine and other supplies to the UK.

No fewer than eight separate Cobra national resilience protocols are set to be activated, including plans to deal with blackouts, petrol shortages and even the collapse of the UK’s satellite navigation systems. Real-life is about to shoulder aside the impenetrable debates over the back-stops – and the back-stops to the back-stops.

Mrs May, for all her faults, grasps this reality. Yes, during the course of the Brexit negotiations, she has made mistakes. She has been excessively aloof. ‘It’s a running joke that there’s no point trying to get a one-on-one meeting with her,’ a Minister told me.

Communication with ‘the Sherpas’, her officials co-ordinating the talks in Brussels, has been poor, leading to her humiliating ambush in Salzburg. Moments of clarity and determination have been interspersed with instances of indecision and paralysis.

But she has, in her awkward, dogged way, demonstrated leadership. Despite the volleys of shot and shell, from Left and Right, she has broadly stuck to her course. To the extent that her well-documented political isolation now stands as – an albeit unwelcome – testament to her singularity of purpose.

It’s time for that isolation to end. Those Ministers and MPs who are this weekend mulling over ‘doing a Johnson’ and walking away need to ask themselves a simple question. What else?

What do they honestly see are the alternatives to the deal the Prime Minister is trying to inelegantly wrangle past her fractious Cabinet, increasingly duplicitous EU negotiating partners and divided House of Commons?

No one can seriously entertain the idea of removing Mrs May at this stage of negotiations and replacing her with a new Prime Minister. The EU would think – correctly – they were dealing with a banana republic, not a mature Western democracy, and respond accordingly.

Which leaves three alternatives to May’s Brexit. One is a No Deal Brexit. People can scream ‘Project Fear’ all they like but I have spoken to Ministers who served in the trenches on behalf of the Leave campaign during the referendum.

Not effete Remoaners, but stout-hearted Brexiteers. And they are terrified. Terrified of the probable economic, social and political cost of a No Deal scenario.

Then there is a second alternative. Which is No Brexit. A new referendum is no longer merely a wicked glint in Peter Mandleson’s eye. As Jo Johnson’s resignation demonstrated, the idea is gaining traction across the political spectrum.

In fact, in the event of a rejection of May’s deal, and the plunge into parliamentary procedural purgatory that could easily follow, it would become the only way of breaking the deadlock.

Save for one. Which is a Corbynite Red Brexit. If a deal is rejected, and a referendum is too politically unpalatable, then the only alternative is a General Election.

An Election characterised by a Conservative Party tearing itself to pieces, Tory activists decrying the great Brexit sell-out and Ministers forlornly imploring voters: ‘Better us than the chaos of Labour. Surely?’ Corbyn wouldn’t need to leave his allotment to secure a landslide.

A Downing Street source told me yesterday, with a mastery of understatement: ‘The deal isn’t going to be perfect.’ But the reality is the voters are not expecting perfection. What they crave now is resolution. 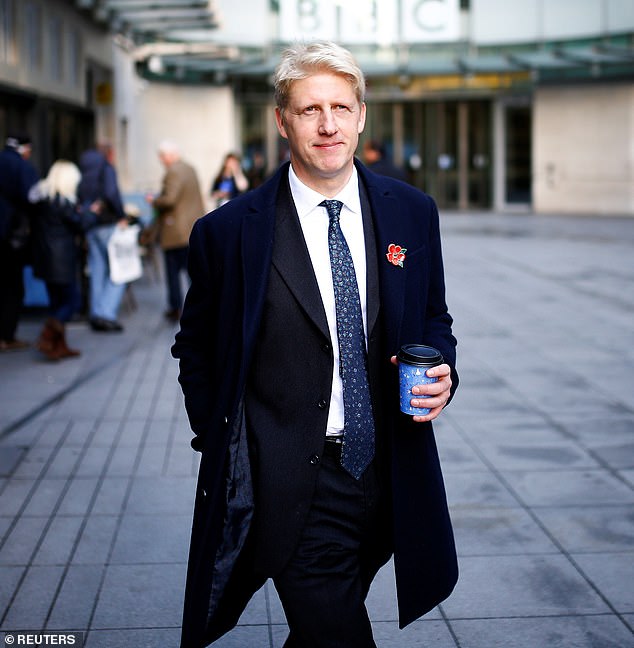 As Jo Johnson’s resignation demonstrated, the idea of new referendum that could put a stop to Brexit is no longer merely a wicked glint in Peter Mandleson’s eye and is gaining traction across the political spectrum

Both Leavers and Remainers claim to have the ear of the people. ‘No betrayal!’ bellows out across the watering holes frequented by the Brexiteers. ‘Think again!’ echoes around the gilded parlours of the Remoaners.

Yet strangely, none seem to hear the real voice of Britain. A voice that is calmly but firmly declaring: ‘OK, just get out now. Get it done. And start focusing on the issues that matter to us.’

Last week Downing Street conducted some polling on reactions to the Budget. Responses were broadly positive, but they also revealed that 40 per cent of women were not even aware a Budget had taken place.

The reason? They were no longer engaging with politics because they were sick of hearing about Brexit. The moment of decision has now been reached.

Mrs May must begin her fateful ride into the Valley of Death. Her Ministers and MPs and supporters must follow her. The time has come to do or die. 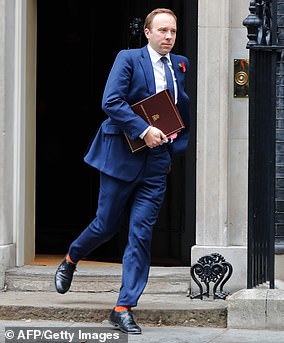 Matt Hancock, Secretary of State for Health and Social Care, wants his staff to follow his lead by being more active

Matt Hancock has decided to put his best foot forward as part of his new drive to get the nation focusing on the prevention of poor health, rather than its treatment.

Arriving at the BBC’s Portland Place studios to promote the initiative, the Health Secretary was met by a producer who immediately ushered him towards the lift.

‘No, no lifts,’ he responded. ‘We all need to start learning to use the stairs.’

Unfortunately, this ministerial edict that has come as something of a shock to his officials.

‘I’m not sure this is going to work,’ one told me despondently. ‘Matt’s office in the Department is on the ninth floor.’ The dream of a slimmed-down Civil Service is within the Government’s grasp.

Northern Powerhouse Minister Jake Berry has been celebrating the birth of his daughter. But I understand he has revealed to colleagues that even during the most intimate family moments there is no escape from Brexit.

‘Jake and his wife were in the delivery room,’ another Minister explains, ‘and the doctor turned to him and said, “So, how do you think the negotiations are going to pan out.” ’ I’m told Mrs Berry – understandably – was not amused. 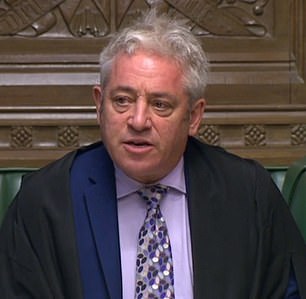 John Bercow in the Speaker’s Chair, where nobody else can sit

John Bercow won plaudits for agreeing to allow last Thursday’s Women MPs Of The World celebration to take place in the Commons chamber.

In an unprecedented move, women parliamentarians from across the globe were invited to deliver speeches from the Commons benches and Dispatch Box.

But one piece of protocol remained inviolate. ‘No one is allowed to sit in the Speaker’s chair,’ one of the events organisers explained to me. ‘That’s reserved for Mr Bercow.’ Women, know your limits.