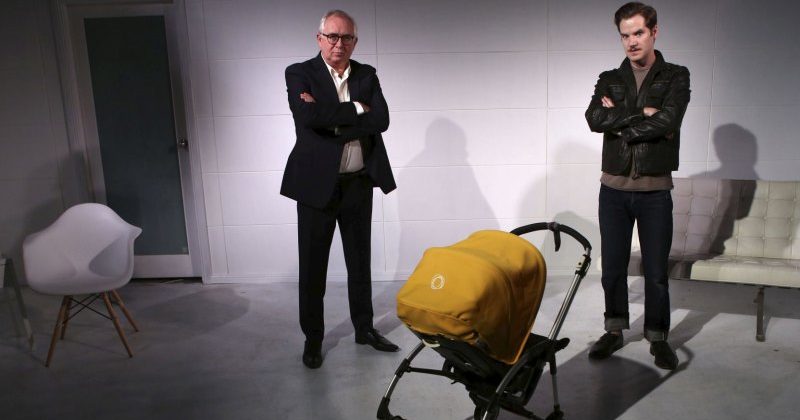 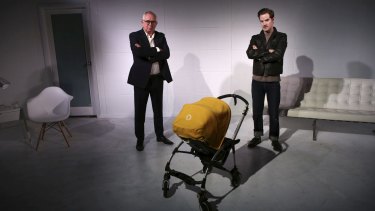 Roy Barker and Lloyd Allison-Young on the set of ‘Cedar Avenue’.Credit:James Alcock

Eric looks a bewildered old codger slumped on a couch. Benign almost. Until he opens his mouth.

The Ulster Protestant is so blinded by hatred he sees his bigoted world view reflected everywhere. Even on the face of his five-week-old granddaughter.

It is an absurd starting point for a gripping, funny, savage and astonishingly violent play that examines a man whose national identity is disintegrating.

David Ireland's 2016 play is set in contemporary Northern Ireland, yet it has a wider currency at a time when nationalist movements and figures are on the rise.

The play unfolds in a series of flashbacks intercut with his therapy sessions.

Eric is a hard man with a loving wife Bernie (Jude Gibson) and daughter Julie (Amanda McGregor), who will not be bringing up her baby as either Protestant or Catholic. Her father's viscous verbal retaliation is foul.

Much-need humour – of the bleakest variety – arrives in the form of a young Protestant paramilitary. The gun-toting Slim bewails his own bad timing at turning to terrorism just as the peace process has begun, before segueing into a discussion of the films of Ron Howard and Tom Cruise.

Violent and volatile, Slim nonetheless provides a moment of insight as he stares into the baby's face.

In his most demanding scene, Eric reveals how on a trip to London he is mistaken for what he's spent his life fighting against.

Roy Barker is riveting as Eric, bringing a bizarre logic and poignancy to an utterly loathsome character. His violence is apparent early, yet when he reveals its full force it is truly shocking. It is hard to watch and prompted audience gasps on opening night.

Lloyd Allison-Young gives a gobsmacking over-the-top performance as Slim, with a mesmerising mix of volcanic anger and humour.

This is a nuanced, well-timed and acted production directed by Anna Houston – a blacker than black play performed on an all-white set (Ester Karuso-Thurn).

In the mix of sharp dialogue, humour and horror, there are echoes of Anglo-Irish playwright Martin McDonagh and Tarantino in this bruising trip into an unrelenting sectarian mind.