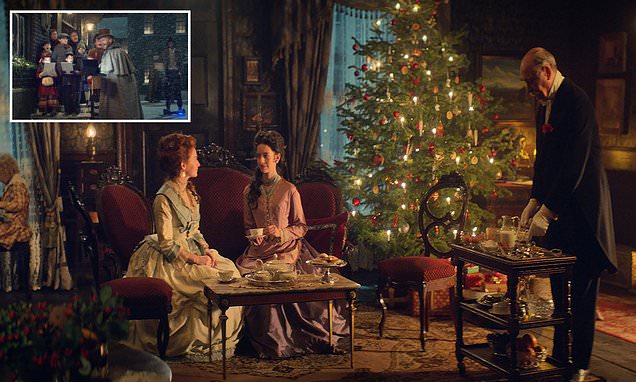 And so it begins! Currys PC World becomes the first retailer to unveil its Christmas advert – featuring Google in the Victorian-era and carol singers using tablets

Currys PC World has become the first retailer to launch its Christmas advert – featuring Google and tablets in Victorian era.

The festive campaign – entitled The Magic of Christmas Upgraded – debuted on ITV tonight during Emmerdale, featuring the carol Good King Wenceslas as the soundtrack.

It begins with a woman dressed in a corseted Victorian gown getting a Google Home Hub to play some Christmas music – leaving her butler very confused.

Carol singers are then seen in the streets using Microsoft tablets as choral sheets, while pub-goers are seen watching the football on a flat-screen TV.

Currys PC World explained how the advert features festive traditions dating back to the Victorian era, to show how modern-day technology can ‘upgrade Christmas’.

Currys PC World has become the first retailer to launch its Christmas advert, set in the Victorian era. It begins with a woman calling on a Google Home Hub to play some festive music – leaving her butler very confused

The advert includes a Scrooge-like character’s wife is seen using noise cancelling headphones to block out all the commotion from the football.

This year, the electrical retailer has beaten other retailers to become the first to release its festive offering.

Last year, Asda and Argos were the first to launch their Christmas adverts, on November 3. 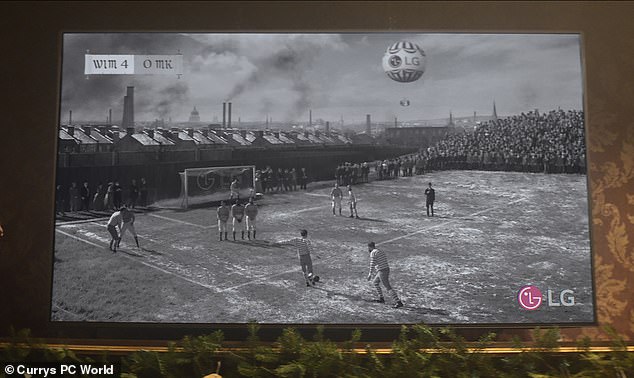 The advert from Currys PC World then moves to the pub, where football fans are watching a match on a flat screen TV 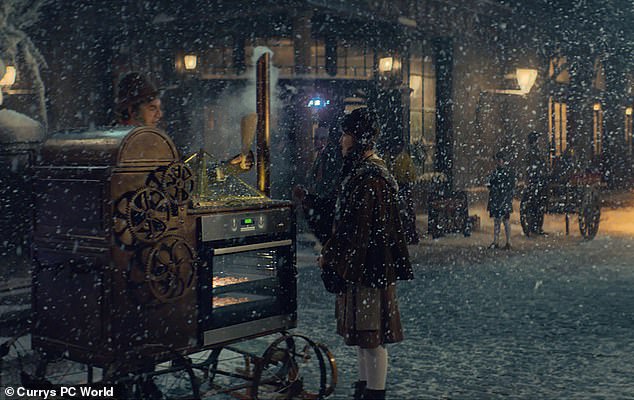 Commenting on this year’s Currys PC world advert, Georgina Bramall – head of brand and advertising at Dixons Carphone – said: ‘Christmas is an amazing time of year, but it can be stressful when it comes to getting it right for family and friends.

‘At Currys PC World, we’ll help our customers enjoy amazing technology that can upgrade even the most established of Christmas traditions to transform the moment.’

Alex Grieve and Adrian Rossi – executive creative directors of AMV BBDO, the agency behind the advert – added: ‘This work is an unashamed celebration of what makes Christmas at Currys PC World great.

‘Much loved traditions, updated by the latest tech that’s right for you.’