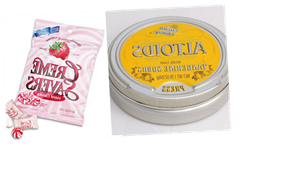 Time to resurrect these long-lost favorites.

We all have our own snack food white whales — those classic snacks with which we share a colorful history, although we’ve gone years being unable to capture them. Such is the nature of all those discontinued foods we still miss; unless the Snacktime Gods see fit to smile down upon us and resurrect our long-lost favorites, we must resign ourselves to the fact that we will likely never taste these glorious creations again.

Fortunately, we have been blessed enough to see the return of some snacks of yore. OREO O’s came back in 2017, sending cereal lovers in a spiral. After a few viral tweets in 2019, Wendy’s brought back their spicy nuggets. In November 2019, Eggo Waffle Cereal returned to grocery shelves. (Nature is healing itself. We are the virus.) In May 2020, the most blessed of blessed snack reboots happened as Dunkaroos officially returned to stores. If you heard something that was just our collective inner child scream-sobbing. Even Surge is back after the electric green soda was discontinued for nearly two decades.

Here are 21 of your beloved childhood snacks, the discontinued foods of your youth, our collective white whales. Stare longingly at them while weeping quietly into your boring adult food. Wistfully touch the screen and say, "You don’t know what you’ve got til it’s gone." Unlock the part of your brain that housed the delicious treats and immediately Google where you can find duplicates. Dig in.

The peanut butter-filled goodness of PB Crisps was first introduced in the early ’90s; by 1995, however, they’d been discontinued — something which truly baffles me, given how fondly they’re looked back on by so many of us ’90s kids. If you want to see what a package of the things from 1993 looks like today, Dinosaur Dracula has you covered.

Although Altoids are primarily known for their "curiously strong" mints, for a few years in the mid-2000s, they dabbled in something a little sweeter: Altoids Sours. Introduced in 2004, they had six shining years in the sun before being discontinued in 2010. If you’re really dedicated, you can still find them for purchase on the internet; just bear in mind that whatever you buy is, at minimum, seven years old at this point. Not even candy lasts forever.

While not technically discontinued, Cheeto Paws aren’t as easy to find as any other bag of Cheetos. They certainly aren’t as accessible as when they were released in 1990. However, places like Walmart and Amazon appear to be selling bags of Cheeto Paws online if you want to try to get your paws (hold for applause) on some.

During the era in which Bart Simpson was shilling Butterfingers (roughly the late ’80s to the early 2000s), Butterfinger BBs hit the scene: Bite-sized Butterfinger candies that were shaped like Whoppers (the candy, not the burger). For the folks who, like myself, loved Butterfingers, but have trouble treating candy bars as movie theater treats, they were perfect; they eliminated the issues that can emerge from having to navigate a flaky bar of peanut buttery chocolate in the dark. Discontinued in 2006, their void has somewhat been filled by Butterfinger Mini-Bites.

Sometimes I wonder if the creation of 3D Doritos was basically a happy accident, the result of an unexpected air bubble incident. In any event, though, 3D Doritos were around from roughly 1998 to 2003… and were still available in Mexico as recently as April 2016. Good to know.

A brightly-colored fruit drink first introduced in 1994, Fruitopia was largely known for its psychedelic commercials. It was phased out in the United States in the early 2000s. Although, it appears to remain popular in Canada, where you can still find it in restaurant soda fountains.

Magic Middles hit their peak in the late ’80s — and for good reason: They were unlike any cookie most of us had ever had before, or have had since. The outside was kind of shortbread-like, while the inside was like eating melted fudge. Some say the E.L. Fudge Double Stuffed sandwich cookies are comparable, but they’re likely lacking that certain je ne sais quoi. The ingredients are kind of the same, but a sandwich cookie is just nowhere near as magical as a filled cookie. Sigh.

During the original heyday of the Teenage Mutant Ninja Turtles (before Michael Bay got his hands on them), we were quite literally awash in Ninja Turtles food tie-ins: Cereal, cookies, microwavable pasta in cans, pizza-flavored snack cracker things… you name it, we had it. By far the tastiest, though, was Hostess’ Ninja Turtle Pudding Pies. According to Hostess via X-Entertainment, they were produced during the late ’80s and very early ’90s specifically as a promo for the first round of live-action films — and although they were basically just vanilla pudding pies, they were green vanilla pudding pies, which of course made all the difference. Despite the recent resurgence in all things Turtles, there don’t seem to be any plans to bring them back.

Holes amused us for the same reason that Dunkin’ Donuts Munchkins did: They were ostensibly the middle of a bigger foodstuff. As is often the case with discontinued foods, no one is really sure why these little guys are no more; they were definitely fun, and the reusable containers were a bonus.

Made by Ralston — which was responsible for a huge number of popular tie-in cereals during the ’80s and ’90s — between 1986 and 1989, Nintendo’s cereal got us with a very specific gimmick: It contained two cereals in one box. On the one side, you had a Super Mario-themed breakfast, and on the other, you had a The Legend of Zelda-themed one. Old boxes are highly sought after (although hopefully not to eat, as the oldest boxes of this stuff are decades old); in February of 2010, for example, one actually went for over $200 on eBay.

I’ve never heard of Flamin’ Hot Cheetos Asteroids, Cheetos Flamin’ Hot Asteroids, or any other form of Cheeto snack with "Asteroids" in its name. But they did exist! Cheetos lists them on its website as an "out-of-this world" snack. They essentially look like small Flamin’ Hot Cheetos cheese balls. If that sounds enticing, you can find the now-discontinued snack being sold at a steep up-charge on eBay.

Sometimes I worry that these were just a collective fever dream we all had. What else could explain a product being named "Creme Savers." However, they did actually exist and you can apparently still buy whatever bags one of the few remaining bags from Sunbelt Paper & Packaging.

Sorry Unicorn Frapps and rainbow bagels, but 90s snacks capitalized on neon-colored foods long before you were but a twinkle in a foodie’s eye. Hi-C Ecto Coolers are best encapsulated by their mascot: Slimer from Ghostbusters. If you want to relive your youth without, you know, drinking a 20-year-old expired juice, Ecto Cooler merch still very much exists.

Similar to Kinder Eggs, Nestle’s Wonder Balls were hollow chocolate sphere’s with treats or toys in the middle. They were, as you might have expected, a choking hazard. Let us sing the song of our people in its honor: "Oh, I wonder wonder, hmm I do, I hoo. What’s in a wonder ball?"

Crispy M&Ms were like if you put a bunch of Rice Krispies inside of a regular M&M. While they were discontinued in the U.S. in 2005, you can still snag a bag on Amazon which, according to the product description, will be imported from Germany.

Munch ‘Ems were the lovechild of a cracker and a chip. They were kind of like Ritz Toasted Chips but smaller and better. They came in flavors like Cheddar, Ranch, and the pièce de résistance, Sour Cream and Onion. They’re so missed there’s a Facebook fan page dedicated to nostalgic snack.

In "Foods I Can’t Believe Existed" news, this image of Philadelphia Cheesecake Snack Bars transported me to being in 6th grade and sitting my parents’ kitchen table. They were essentially a shelf-stable piece of cheesecake shaped like a granola bar. Lest you think this snack undesirable, there’s a Change.org petition to bring back the snack that has over 25,000 signatures.

These little licorice nuggets came in fruit flavors like strawberry and orange and were filled with a tart, chewy center. While Twizzler’s Twerpz listed on CandyWarehouse.com, the currently out of stock.

Oreo Cakesters dared to go where no Oreo had gone before. It begged the question "what if the cookie part of the Oreo…was chocolate cake?" The answer? It would be delicious. Unfortunately, we flew too close to the sun and Oreo Cakesters were discontinued though some have tried to bring them back with, you guessed it, a Change.org petition.

I let out an audible gasp when I saw a picture of these. String Things were like a licorice-Fruit Roll Up hybrid. They were chewy and fruity and were definitely stuck in my teeth for most of my youth. Still, I’d risk a cavity or three to enjoy a String Thing again.