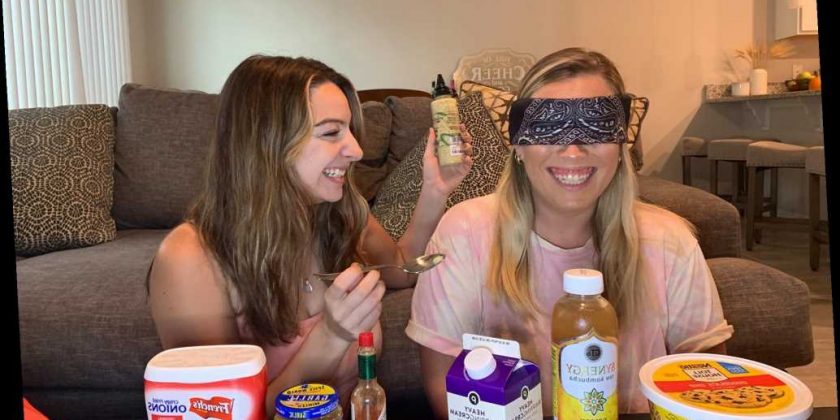 Shannon Roche knew she had COVID-19 after she bit into a sour-cream-and-onion potato chip in early July.

“I couldn’t taste that,” the 25-year-old told The Post. She then ran to the bathroom and grabbed her favorite perfume. “I sprayed every inch of my body and couldn’t smell it,” said Roche, who, along with her roommate, tested positive for coronavirus on July 8. The pair spent two weeks sequestered in their shared Orlando townhouse, where they passed the time by participating in a bizarre new trend: taste-testing gross foods and posting the results on TikTok as a kind of COVID badge of honor.

Homemade videos show the roommates downing hot sauce, lemon juice, balsamic vinegar and booze, to name a few of the more pungent ingredients, while blindfolded. Minced garlic? “I knew what it was just by the texture,” Roche said. Not so with raw onion, which she mistook for “celery or a cracker.”

Loss of smell and taste are early indicators of a coronavirus infection, especially in younger patients who may not exhibit other symptoms. Harvard researchers concluded in July that the disease attacks supporting cells to olfactory neurons, suggesting that the brain chemistry that allows us to sniff won’t be permanently damaged by COVID, although some long-haulers say their senses are still debilitated months out.

Now, more than two months after her diagnosis, Roche’s taste buds are still mixed up. “I can’t taste pumpkin flavors, but I can taste my caramel iced coffee,” said the Cherry Hill, New Jersey, native, who would sniff a K-cup every morning to monitor her symptoms. “I wasn’t able to smell the grounds until two weeks after I tested positive.”

Another surprising side effect for infected college kids locked indoors? The dorm dwellers — who in some cases are being digitally tracked so as to reduce the virus’ spread — can’t taste the gnarly flavor of cheap alcohol.

“I drank El Jimador, which is tequila on a college budget,” said Cammie Cooke, 19, an Auburn University sophomore who was diagnosed with COVID-19 toward the end of August. She posted a video to her TikTok account showing her taking shots of Texas Pete hot sauce, apple cider vinegar, minced garlic and, yes, tequila.

“It was the strangest thing. It made drinking a lot more fun,” Cooke, a public relations major, told The Post. “I couldn’t even feel the burning, and I didn’t need the chaser.”

Roche said she had the same superpower. “I did shots of vodka for fun and it felt like water,” she said. “I was throwing them back and taking videos and sending them to my friends.”

Cooke spent quarantine with three roommates — only one of whom had tested positive — watching movies, scrolling through TikTok and enjoying wine night, though Cooke didn’t bother with the vino. “I thought, ‘I don’t need to waste the calories,’ and I would drink shots of tequila.”

Cooke says it was because of TikTok that she knew to get tested immediately and start quarantining when one morning she couldn’t taste the coffee she always gets at Dunkin’.

After nearly two weeks indoors, she and her fellow co-eds celebrated their return to campus — and the return of their senses.

“We each dropped $70 on dinner. We got burgers, fries, drinks. It was like taking the first bite of new foods,” said Cooke, who says her one regret of her time without taste was not trying beer.

“I don’t like beer, but I think girls who do are so cool,” said Cooke. “That would’ve been the perfect time to crack one open.”

Even though she still has lingering symptoms, Roche has retired her “party trick” of downing harsh liquor. Now, when she ventures out to bars and restaurants with her boyfriend, she sticks to what she knows — or at least used to know.