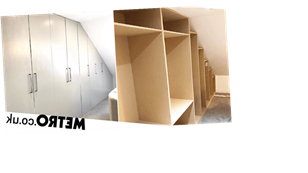 Fitted wardrobes can be wildly expensive – but one couple who were given an eye-watering quote, saved themselves a fortune by building their own.

Bridie Gallagher, and her partner Jordan, from Carlisle, Cumbria, were taken aback by the quotes they received for a bespoke fitted wardrobe for their attic room, so decided to give it a go themselves.

‘We were quoted £24,000 by a company to build a fitted wardrobe,’ Bridie told money-saving community LatestDeals.co.uk.

‘They were offering 50% off the price if I bought it within the week, but it was still out of our price range.’

Birdie, a 30-year-old bar owner, says she thinks the quote was so high because their attic room is awkwardly spaced, so the wardrobe needed to be made to measure.

‘It’s a fairly large space, so it would take a nine-door wardrobe from wall-to-wall,’ she explains.

‘We thought that if that one company had quoted that much, it wouldn’t be worth trying any others, as it was obvious it was going to be expensive. However, we did also ask a local joiner whose quote came in at £4,000. Even though this was far less, we thought it was still too much to spend on a wardrobe.’

With an eye firmly on the budget, the couple turned their attention to the next best solution: DIY. Jordan set about researching how to fit an attic room wardrobe by watching tutorials on YouTube.

‘He was confident that it would be easy enough, so we decided to go for it,’ says Bridie.

‘We looked at building the inside and buying the doors made to measure, but it would have still cost us a few thousand pounds for the doors alone, so Jordan wanted to make these himself too. We thought that, if the project didn’t go as planned, buying the doors would at least still be an option as a worst case scenario.’

Bridie and Jordan measured up, made a simple interior shell, and got the MDF for the doors cut to size at B&Q.

‘This was a very handy service, because the doors were quite long and Jordan didn’t have the right tools to hand to make a nice straight line. We bought them all as rectangular doors, but had to cut the angles by ourselves for the last few sections.

‘Jordan wasn’t 100% happy with the finish, even though I thought they looked totally fine. That’s when he decided to add a little piece of MDF edging to each of the doors. However, this meant that he had to cut them all a little bit smaller in order to fit.’

The couple took the setback in their stride. Jordan borrowed a circular saw from a friend and got to work.

‘Although it was an extra step we hadn’t planned for, his theory worked and it did make it a nicer style of wardrobe,’ adds Bridie.

An extra bonus was that the doors were now exactly the same size as IKEA’s tall modular sliding door wardrobes. This gave them the idea to use the ready-made IKEA wardrobe drawers as an affordable way to build the interior fittings, rather than making them bespoke.

‘As well as installing the IKEA drawers, Jordan added rails for shirts and shelves for extra storage for items, such as memory boxes and suitcases,’ says Bridie. ‘He made the two double wardrobes first as they each required two built-in shelves. He then went on to build the other five sections, one at a time.

‘He’s really good with numbers and very particular, so I knew he’d do a great job. He took 10 days off work to focus on it, and he didn’t find it difficult.’

The couple used cupboard paint from B&Q for a professional-looking finish.

‘It’s expensive for paint, costing around £36 for two litres, but it won’t chip,’ says Bridie. ‘My top tip is to choose a water-based paint so the colour doesn’t fade over time. We got all the handles and hinges from Screwfix.’

The hard work paid off and their brand new fitted wardrobe was achieved for a fraction of the original quote. In total, the project cost the couple around £500.

Jordan has since gone on to complete a number of jobs around the house, from fitting a kitchen (with a little help from a friend) to tiling the bathroom and slabbing the patio.

‘We are looking to move house next year and he already has plans to make a bed with a built-in television at the foot,’ reveals Bridie.

‘I would advise anyone looking to make their own fitted wardrobe to do their research online first on YouTube or Instagram,’ she adds.

‘There are lots of tips and tutorials available and you have the chance to ask questions too. I now have 5k followers on Instagram from people seeing the DIY he’s done. I’m proud of the hard work and hours he’s put into our home.’

Do you have a DIY story to share? We want to hear from you.