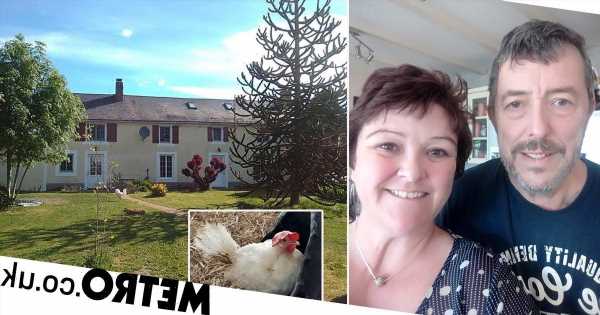 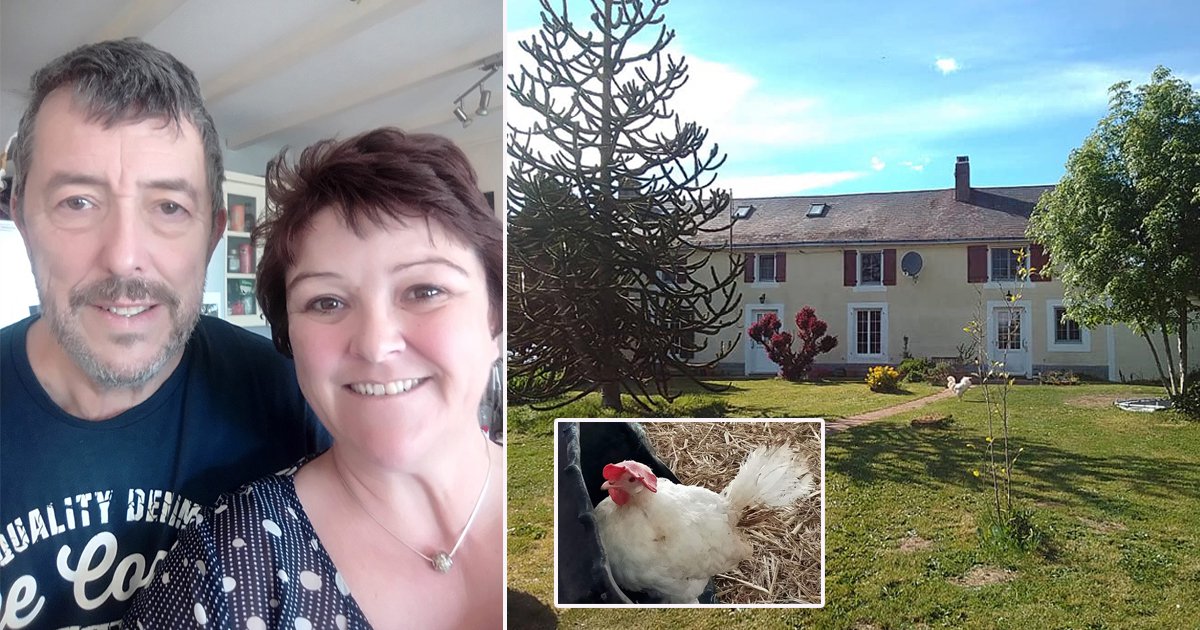 Ever dreamed of quitting your corporate job to live life completely immersed in nature – well, one couple have achieved just that.

Jenny Sebborn, 50, and her husband Pete, 64 decided to ditch the rat race and moved to rural France to run a farm – and they didn’t let the fact that they have no no agricultural training stop them.

In fact, they say they have now become ‘chicken whisperers’ after saving 20 hens from the abattoir.

Jenny and Pete were both working with a vehicle rental company in Ipswich, Suffolk. Pete was fleet director and Jenny was special accounts manager. But they decided they had had enough of that life.

The couple moved to a five-acre smallholding in Pamplie, inland from La Rochelle, in 2010, but at first they were clueless at how to start their ‘back to nature’ existence.

‘We learned everything from scratch from books and asking people – even though we didn’t speak French – as we had no internet to start with, but now we are totally self-sustaining,’ says Jenny.

‘The only thing we have to buy is wine, as that’s all we’re not too good at making.

‘Despite working at least from 7.30am to 9pm – or all night during lambing – and eating so healthily, we have still put on weight! I blame that red wine.’

The couple had no idea about farming when they first arrived, but Jenny never did quite get the stomach for killing for her supper.

‘We are now self-sufficient for meat,’ she says. ‘I thought when we left England there was no way I could eat an animal I knew, let alone kill one.

‘Our animals that are for meat either go to the abattoir or Pete deals with it, although I have come to terms with the eating side.’

As well as eating their animals, the couple have rescued lots of creatures from the nearby area.

‘We’ve bought them purely because we were upset by the conditions they were kept in,’ says Jenny.

‘There was a sheep given no grass with hungry lambs, and there’s been breeding stock we’ve nursed back to health.’

Most recently, the couple nursed 20 chickens from the brink of death back to health.

‘We saw an advert a few weeks ago for chickens available before the annual clear-out of their shed which would have seen them go to an abattoir,’ says Jenny.

‘We intended to get just the five that the guy shoved in a crate that were in a state that was horrendous beyond words and smelling terribly.

‘They were bald, you could see their wing bones and they had pale instead of red combs. We weren’t sure they were even going to live.

‘So, we thought we’d better save 20 and he tried shoving them all in a crate. They were all afraid of going outside and afraid of us.

‘We didn’t go in his shed to see the conditions, but inside the chickens would have been packed and very hot under the lights.’

Jenny and Pete gave the frightened fowl straw bedding to keep warm, and slowly they began to get better and feel more confident.

‘Three weeks have gone by now and they look totally different, although there’s still a bit further to go before they’re 100% recovered,’ Jenny says.

Along with their chickens, which now produce more eggs than the couple can eat, they have milking goats, rabbits, geese, ducks, 20 sheep, lambs, three pet dogs and farm cats.

Complicated rules in France mean they do not keep pigs, but they still have more than enough meat for themselves, as well as selling some, along with their excess eggs.

They have also had quail, guinea fowl and turkeys at Christmas. And that’s without mentioning the countless varieties of fruit and vegetables.

The pair grow everything from apples to figs, nuts, jostaberries, asparagus, turnips, cantaloupe melons, sunflowers and herbs to broccoli and cauliflower, they even make household products like washing powder – from conkers – soap, and shampoo bars.

They also produce juice, chutneys, jams, bread, cheeses, honey from their bees and Pete even brews up beer.

‘We had wanted to have an easier life, but it didn’t turn out that way,’ says Jenny. ‘At one point, we ended up with 250 animals.’

‘I was bottle-feeding five lambs every couple of hours, so it was a struggle letting them go. I’ve been in tears. And one pig I got too attached to.

‘After some animals are killed, sometimes I can’t eat things straight away. But when they are alive, we ensure they are kept happy and well.’

Jenny says the two of them had always dreamed of retiring to Europe one day. Being made redundant simply sped this process up.

‘We actually loved our jobs, but we were commuting an hour each way at first, and then the firm was taken over and moved nearer, but we were made redundant,’ says said Jenny.

‘The night we arrived in France was in February, the temperature was minus 17 and all the radiators had blown.

‘We also had no phone, no internet, no TV and no electricity. We did the whole place up ourselves, apart from using an electrician because of all the rules.

‘It wasn’t properly habitable for a year and took about six years to get everything done. But it’s been very rewarding.’

One of the biggest sacrifices is the lack of holidays, as the pair can’t leave their animals or stock for long periods.

‘That is the big problem. We missed Pete’s son’s wedding. We have to get people in to run the farm and give some of the animals they don’t know how to look after to other people while we’re away.

‘But we take it easier on Christmas Day. We just feed and water and say, “We’re not cleaning pens today!”‘