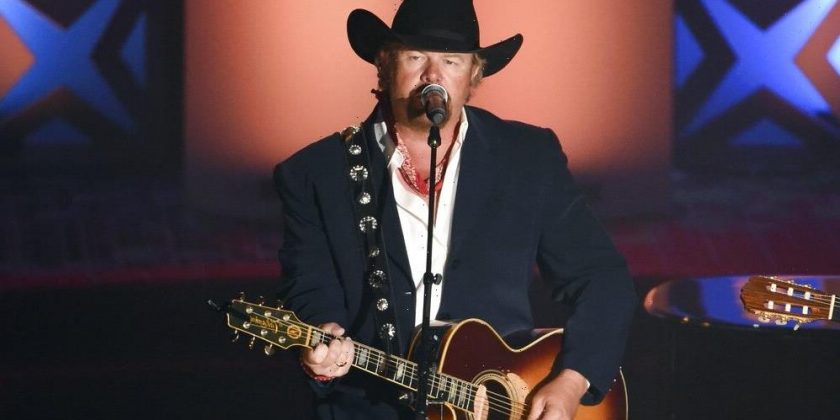 UPDATE: In his first interview since revealing earlier this year that he has stomach cancer, Toby Keith says he is “thinking about getting back into fighting shape.”

While acknowledging that his illness is “pretty debilitating, Keith added, “as long as everything stays hunky-dory, then we’ll look at something good in the future.”

Keith spoke to CMT Hot 20 Countdown on his condition. He said that “I need a little bit of time to just rest up and heal up.”

Keith made his illness public in June, canceling dates as he took time for treatment. But he’s done a few public appearances, including one performance in November at the Jeff Ruby Steakhouse in Lexington, KY, where he performed “I Love This Bar” and Lynyrd Skynyrd’s “Sweet Home Alabama.”

Earlier this week, Keith posted a sweet photo of himself on Instagram with a young cancer patient, writing alongside it, “Thumbs up if you’re celebrating #GivingTuesday by donating to the @tkfoundation1! Your donations make the OK Kids Korral possible, a home away from home for children battling cancer and their families.” The TK Foundation is a Keith charity that assists young cancer patients.

EARLIER: Toby Keith, a seven-time Grammy nominee who was recognized as entertainer of the year by the Academy of Country Music two years in a row in 2002 and 2003, revealed Sunday he has stomach cancer.

The 60-year-old Keith posted to social media on his condition.

“Last fall I was diagnosed with stomach cancer,” he wrote on Instagram. “I’ve spent the last 6 months receiving chemo, radiation and surgery. So far, so good. I need time to breathe, recover and relax. I am looking forward to spending this time with my family. But I will see the fans sooner than later. I can’t wait.”

Keith’s publicist, Elaine Schock, said he will not be performing at scheduled gigs “for now.” His latest tour was scheduled to start this Friday.

His most recent album, “Peso in My Pocket,” spawned the top 25 country single, “Old School.”

Keith was inducted into the Nashville Songwriters Hall of Fame last November. He recently performed at the Heroes Honor Festival at Daytona International Speedway.

The revelation of Keith’s illness prompted an outpouring of support from famous friends.

“Wishing you much strength and healing my friend!” ESPN anchor Hannah Storm replied.

“Wishing my big buddy a speedy recovery and a whole lotta love from most redheads around the world,” tweeted singer Sammy Hagar, alongside a photo of the two.

Native Oklahoman Keith worked in the oil industry and played in the USFL football league before embarking on a music career. His self-titled debut album on Mercury came out in 1993 and went platinum for sales of more than a million units.

Known for his conservative politics, Keith is best known for his song “Courtesy of the Red, White and Blue (The Angry American)” in 2002, partly inspired by the 9/11 terrorist attacks.