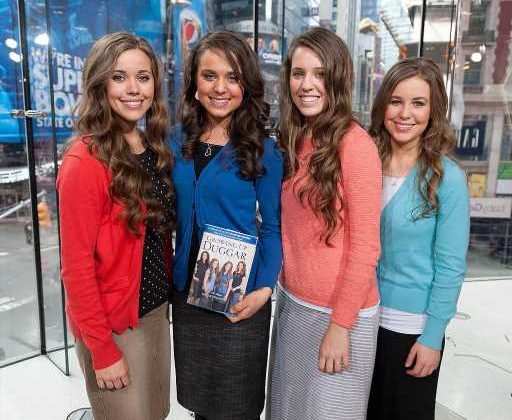 As the Duggar daughters have grown up and gotten married, they appear to be following in their parents’ footsteps – for the most part. All of the Counting On stars have married young and started having children at a shocking rate, they are all stay-at-home moms, and they are still extremely religious. However, the one thing that has changed for some of the Duggar daughters is their wardrobe. Jill Duggar, 28, and Jinger Duggar, 25, have decided that Jim Bob’s dress code is too strict for them, and they both have shown a little skin since getting married.

The husband is in charge of the ‘Counting On’ stars

When the Duggar girls leave home, the power over their wardrobe transfers from their dad to their husband. And, according to In Touch Weekly, Jinger Duggar’s husband, Jeremy Vuolo, made his views clear on women’s clothing during a sermon in the Spring of 2017.

“Itis your liberty as to whether you dress modestly with a modest pair of pants,or with a skirt, or with a T-shirt, or with a blouse. It is not your liberty,women, to wear sensual, seductive clothing that is designed to draw theattention of your brothers,” Jeremy told his congregation.

Jinger Duggar was the first to showsome leg

After Jinger married Jeremy in November 2016 as seen on Counting On, she quickly started to show fans her own style by wearing jeans and raising her hemlines. In one sweet pic of the couple from the first few months of their marriage, Jinger and Jeremy are sharing a kiss, while Jinger is wearing a knee-length skirt and popping her leg.

She was also wearing a sweet pair ofboots with heels, making it clear that she had done some shopping since movingout of Jim Bob and Michelle’s house.

Jinger Duggar and Jeremy Vuolo movedto Laredo, Texas, when they tied the knot, and she started rocking sleevelesstops to battle the Texas heat. She really shocked fans when she matched asleeveless shirt and a short tennis skirt while playing tennis with herhusband.

After Jill married Derick Dillard in2014, she kept things pretty modest for the first couple of years. But, aftergiving birth to her two sons, Israel and Samuel, Jill started to rebel with herwardrobe. She started off with a nose piercing and henna tattoos. Then, justlike Jinger, Jill added pants and jeans to her closet.

Jill’s skirts also got shorter, withsome even hitting above the knee. And, she also started wearing high heels.

Jinger Duggar announced that she waspregnant with her first child in early 2018, and her maternity style wasabsolutely stunning. The Counting On star’s second and third trimesterswere in the spring and summer, so she often wore sleeveless shirts and shorterskirts, and always seemed to be rocking some heels.

One of Jinger’s maternity looks wasa little black dress that hit right at the knees, and she looked incredible whyshowing off her legs.

In addition to her shorter skirts,Jill has also posted pics of herself wearing Bermuda-length denim shorts onmultiple occasions. And recently, a close friend posted a pic of Jill wearingshort shorts. However, that might have taken things a little too far, as Jill’sbestie quickly deleted the photo.

Last summer, the former CountingOn star also posted a selfie in the pool and she was wearing a bathingsuit. But she made sure to only show her face and shoulders.

Jinger and Jill have made it clearthat Jim Bob’s dress code is a thing of the past. Now, it will be interestingto see if the other Duggar daughters follow their lead. Of course, it’s not upto them, it’s up to their husbands.

Jinger Duggar returns in all newepisodes of Counting On later this year on TLC.