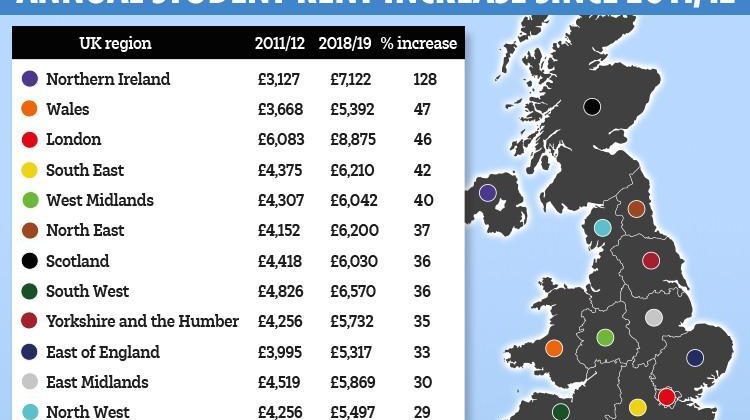 Students are now spending on average £147 a week on rent, which the NUS (National Union of Students) says is creating "a real affordability problem for students". 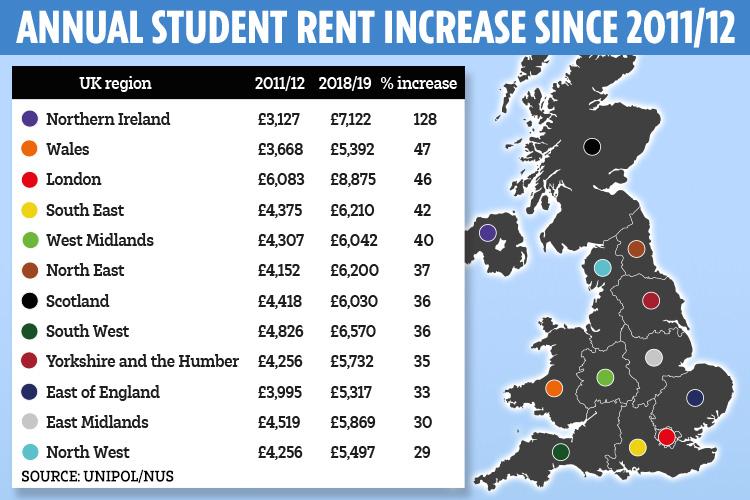 When looking at the cost over a year to rent as a student, the cheapest location is now the East of England at £5,317 followed by Wales where it's £5,392.

There are no surprises that London is the most expensive place to rent with an annual cost of £8,875 per year.

But the region that has seen the largest increase in student rent is Northern Ireland – where rents have risen by 128 per cent in the past six years.

At the other end of the scale, the region with the smallest rent rise over the past six years is the North West where rents have risen 29 per cent.

The NUS and student housing charity Unipol, which conducted the research, have put down the rising costs to an increase in upmarket accommodation.

How to cut the cost of rent?

For example self-catered rooms with an en-suite bathroom make up 58 per cent of student accommodation.

The research also highlights the large proportion of a student's loan that goes towards rent.

For example in 2011, the average cost of rent made up 58 per cent of the student loan received, but in the past year this has risen to 73 per cent.

Both organisations have said that more needs to be done to develop accommodation that fits the needs of all students, and not just those who are well off.

Eve Crossan Jory, NUS vice president, says increased rent costs are leading to students working longer hours in jobs "which can be a detriment to their studies".

She said: "The need for change is clear: we need a new model for the provision of student accommodation that puts affordability for students, rather than profit, at the heart of its mission.

"There is also a responsibility upon Government to consider not just the financial burden of these costs, but how they present a barrier to accessing education for those from disadvantaged backgrounds, as it shapes the future of student funding in the wake of the post-2018 funding review.”

Have a read of our handy guide to student loans to find out when they're written off and when the repayment of the debt stops.

We've also rounded up the best student bank accounts on offer this year, which also offers perks such as a free railcard or £3,000 overdraft.
And if you've recently finished university, take a look at our best graduate accounts for 2018 which you can switch to now.