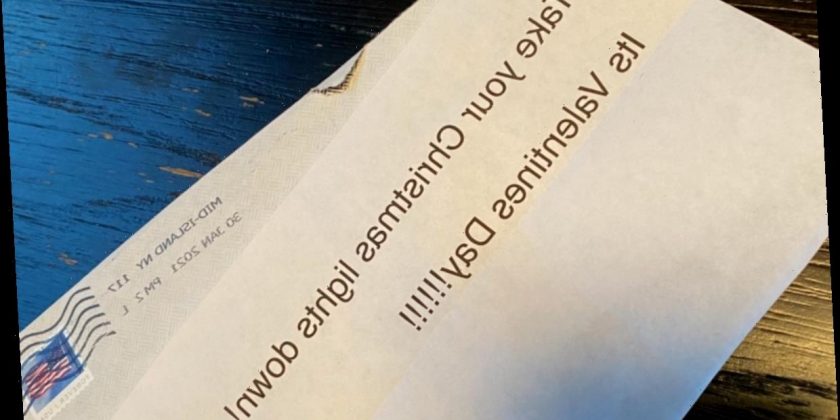 A community on Long Island, New York is showing their support for one local family, who was shamed for leaving up their Christmas decorations despite recently losing multiple relatives to COVID-19.

Sara Pascucci said she received an anonymous letter in the mail this week that read, "Take your Christmas lights down! It's Valentine's Day!!!!!!" according to News 12 Long Island.

Sharing the mean note in a post on Facebook, Pascucci explained that the festive decorations have remained on her Bethpage home because she has been grieving the loss of two family members, both of whom died of coronavirus.

One of those relatives was her father, Anthony Pascucci, 61, who Sara noted was the person who initially put the Christmas lights on their home.

"He loved decorating our house every year for the holidays ever since we were children and he took so much pride in doing so," she wrote. "He did it for us, especially for my 2-year-old son, who he loved so dearly."

But everything changed on Christmas Eve when Pascucci's entire family fell ill with COVID-19, according to her post.

A GoFundMe page set up on her behalf indicated that Pascucci, her father, her 2-year-old son and her aunt Connie, 70, all contracted the virus — but only she and her son recovered.

"My father ended up going to the hospital because he couldn't breathe," she recalled to WCBS. "They ended up having to put him on a ventilator, and he passed on Jan. 15."

Weeks later, the rude letter arrived in her mailbox.

"We opened it and were a little taken aback because we've been through a lot lately," Pascucci told WCBS, noting that it was postmarked on Jan. 30 and had no return address.

"Considering the circumstances, we didn't find it funny," she added to News 12 Long Island. "It was actually very hurtful."

In her Facebook post, Pascucci defended herself, explaining that she has been focused on caring for the home and "battling all the emotions that go with this."

"We have been busy with funeral arrangements, mortgage/utility payments, and just the grieving process of it all," she wrote. "So yes, we haven't gotten around to taking down his Christmas decorations. And maybe we just aren't ready to yet. I won't apologize for this."

She ended her post by suggesting that others be a little kinder, especially during an ongoing pandemic where so many are struggling.

"You never really know what they are going through," she wrote. "May you never have to feel the pain that we have felt within the past few weeks. Maybe next time, offer a helping hand to someone that may be in need."

In the wake of her speaking out, many members of the community rallied behind the Pascuccis and revealed that they, too, had received the letter in the mail.

"I thought it was really rude, especially now with COVID and everything going on," fellow neighbor Lori Kelly, who also has Valentine's Day decorations on her home, told WCBS. "Mind your own business. This is my property, so if I want to leave my Christmas lights on all year long, I will."

Added neighbor Brian Kelly to News 12 Long Island: "I think [it was] someone who has too much time on their hands. Lights? That's your biggest problem right now, lights?"

The GoFundMe page was also set up by one of Pascucci's friends to help her pay for funeral costs and household expenses. So far, it has raised over $4,200.

Overwhelmed by the support, Pascucci told News 12 Long Island she was thankful to those who "showed their love and condolences to me" and hopes to one day speak to the person who wrote the note.

"I want to thank everyone who has responded… it made me feel a lot better," Sara explained. to the outlet. "This letter is not even something that hurts anymore because of everyone's love and support."

On her Facebook page, she added: "To the grinch of Bethpage: LOVE OUTWEIGHS THE HATE!!"

"Think before you act! There may be reasons behind something so put yourself in others shoes before you come from a place of negativity and pettiness," she continued. "After the challenges we ALL have faced this year, this world can use a little Christmas."