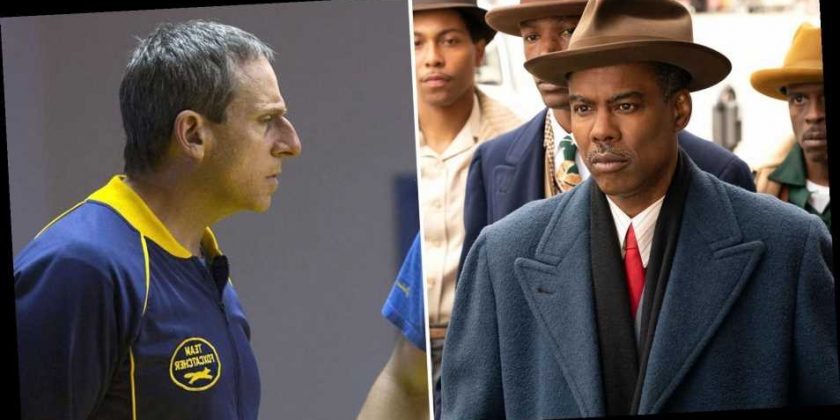 Bring the  drama! Chris Rock, Steve Carell, Kate McKinnon and several of their fellow comedians have more than proved they are cut out for serious roles.

Actors who are known for their humor often get typecast into similar parts or willingly pursue the funniest projects in the business, but some step outside their comfort zones and show fans what they are made of.

Rock followed in the footsteps of Billy Bob Thornton, Ewan McGregor and Kirsten Dunst when he agreed to star in season 4 of Fargo as crime lord Loy Cannon. Even the Top Five actor did not expect the role to come his way, though.

“I got a call from my agent that [creator] Noah Hawley wanted to meet with me,” Rock told The New York Times in September 2020. “I get acting offers, but I get more hosting offers than anything. It is not uncommon for somebody to want me to do a high-priced wedding or bar mitzvah — a few years ago, I officiated the wedding of Daniel Ek, the owner of Spotify, and Bruno Mars was the wedding band. I think I sat next to [Mark] Zuckerberg at the reception. I just assumed Noah had some crazy request like that. The only reason I went is I love Fargo. And I get there and he offers me this part.”

The Madagascar star knew the way, in part, because of those who came before him. “My casting isn’t as weird as it seems if you really watch Fargo. [Keegan-Michael] Key and [Jordan] Peele are in the first season and Brad Garrett’s amazing in season 2. Hey, it’s my turn, OK?” he explained. “I want to work on good stuff. Everything I’ve done hasn’t been great, but I was always striving for greatness. I loved Marriage Story. I’d kill for something like that. You see what [Adam] Sandler did with Uncut Gems. But you’ve got to get the call and be ready when your number’s called.”

Other comedic actors, such as Melissa McCarthy, learn important lessons from their dramatic work and let them influence their everyday lives.

“She didn’t need you to like her,” the actress told Us Weekly in October 2018 of playing writer Lee Israel in Can You Ever Forgive Me? “She was fine as she was, and that’s a huge takeaway. I was glad for the reminder. I tell my kids all the time, like, ‘You are the one who determines your self-worth. Not what other people think of you.’”