New York: Right-wing provocateurs Gavin McInnes and Tommy Robinson have been forced to delay a planned tour of Australia because Robinson "cocked up" his diary by double-booking his visit with a Brexit protest in the UK. 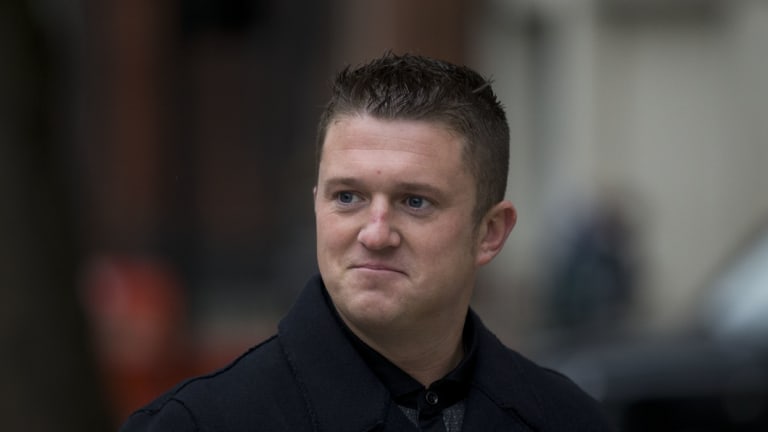 Tommy Robinson, former leader of the far-right English Defence League, has postponed a planned visit to Australia to attend a Brexit protest in LondonCredit:AP

McInnes and Robinson's speaking tour, which had been scheduled for early December, has now been postponed until February.

The delay provides the Morrison government with a reprieve from a difficult decision about whether to allow the controversial figures to enter Australia.

McInnes and Robinson have a history of making inflammatory statements about Muslims, women and members of the LGBT community.

McInnes is a founder of the Proud Boys – an American male-only group that says it promotes "western chauvinist" values – while Robinson co-founded the anti-Islam English Defence League.

Independent MP Kerryn Phelps is scheduled to appear at an event in Parliament House on Thursday morning with the organisers of a petition that calls for McInnes and Robinson to be denied visitor visas.

Indigenous leader and academic Marcia Langton is among those delivering the petition, which has been signed by 80,000 people.

Labor and the Greens have called on the government to deny the men entry to Australia – a call backed by former Australian Border Force commissioner Roman Quaedvlieg and former race discrimination commissioner Tim Soutphommasane.

Quaedvlieg told Fairfax Media that McInnes risked inciting violence if allowed into the country and that he was more dangerous than some Muslim preachers who have had their visa applications rejected.

Robinson’s personal assistant, Hel Gower, said that he had postponed the Australian tour because of a scheduling conflict.

"He does have a visa but due to family commitments the date had to be changed plus he cocked up his diary," she wrote on Twitter.

Robinson will be participating in a “Brexit betrayal march” against British prime minister Theresa May in London on December 9 when he was supposed to be in Australia.

Robinson and McInnes's "Deplorables" tour, with VIP tickets costing up to $995, is now scheduled to begin in Perth on February 1 with appearances in Adelaide, Melbourne, the Gold Coast and Sydney.

Earlier this month Robinson had to cancel a planned visit to meet Republican politicians in Washington because he was not granted a US visa in time. 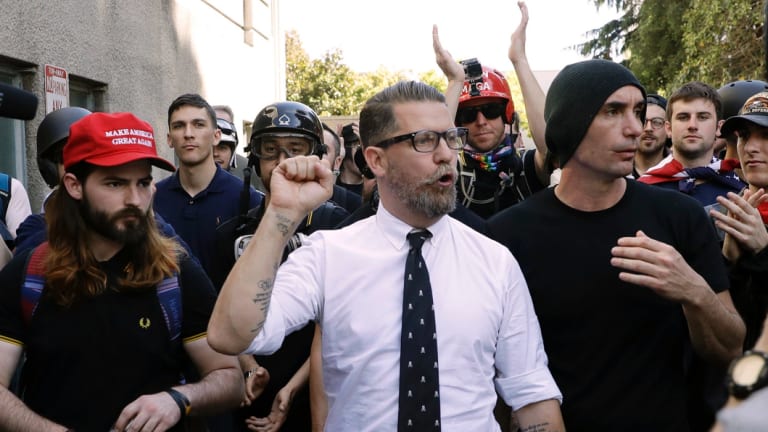 Proud Boys founder Gavin McInnes has a history of making inflammatory statements about Muslims, women and members of the LGBT communityCredit:MARCIO JOSE SANCHEZ

Members of the Proud Boys, the group founded by McInnes, have been involved in recent street fights with left-wing protesters in New York and Oregon.

McInnes last week said he was ending all association with the group.

He has said that "Muslims have a problem with inbreeding" and that "the only thing they really respect is violence and being tough".

A spokesperson for Immigration Minister David Coleman this week told Nyadol Nyuon, the organiser of the petition, that it would assess the men on character grounds.

"While the Government fully respects and supports Australia’s well-established freedom of speech and freedom of religion and belief, everyone who wishes to enter or stay in Australia must satisfy the character requirement as set out in section 501 of the Act," the spokesperson said.

"A non citizen may fail the character test if it is assessed that they may vilify, incite discord, or represent a danger to the Australian community."