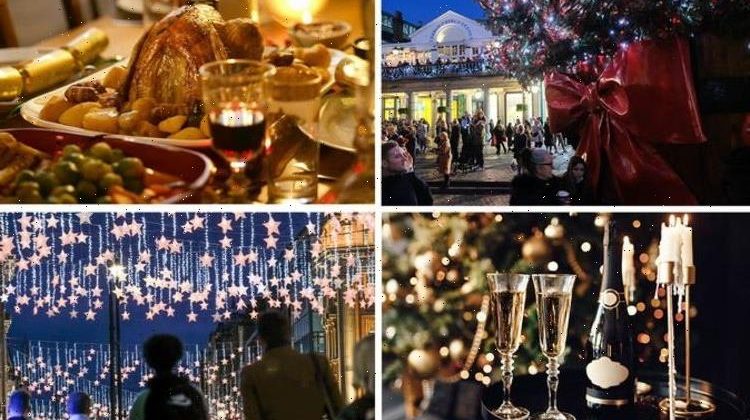 Round 1 – Food and drink

1 – In which country is it tradition to eat KFC for Christmas dinner?

2 – What item is traditionally hidden in a Christmas pudding?

3 – In the first-ever commercially produced Christmas cards, children are pictured drinking a surprising festive beverage – what is it?

4 – How many different types of sweets are there in a standard box of Quality Street?

5 – In Tudor times, single women believed eating a festive treat would help them find a husband – which treat was it?

6 – Which way are you meant to stir your mincemeat, Christmas cake and Christmas pudding for good luck?

7 – In a 2006 TV special, Nigella Lawson stunned viewers with the surprising way she prepares her turkey to guarantee it stays moist. What was it?

8 – What is normally served as pudding on Christmas Day in Scotland?

9 – Leah Shutkever holds the world record for the fastest time to eat three of which Christmas item? (She managed the impressive feat in 52.21 seconds, on September 25, 2019)

10 – Which fruit is traditionally put in a Christmas stocking?

7 – Leave it in a bucket of water overnight

9 – She ate three mince pies in under a minute.

1 – In total, how many Christmas gifts are given in the Christmas carol ‘The 12 Days of Christmas’?

2 – A social media campaign managed to usurp the Christmas Number One spot in 2009 with a surprising choice of song, what was the song?

3 – Which Queen song has been Christmas number one twice?

4 – Who has Elton John teamed up with this year for a Christmas hit?

7 – In the song ‘We Wish You a Merry Christmas’, the carollers won’t leave until they get some: What do they want?

10 – Which British artist has a whopping eight Christmas number ones under their belt, with different acts?

2 – Killing In The Name Of, by Rage against the Machine

5 – All I Want For Christmas Is You, by Mariah Carey

2 – How old is Kevin McAllister (played by Macauley Culkin) in Home Alone?

3 – In everyone’s favourite Christmas Rom Com, Love Actually, what song is Billy Mack (Bill Nighy) trying to get to Christmas Number One?

4 – In the classic Vicar of Dibley Christmas special ‘The Christmas Lunch Incident’, how many Christmas dinners does Geraldine Granger have to eat?

5 – Arguably a Christmas movie, in which city is the film Die Hard set?

6 – What is the name of the reindeer in Frozen?

8 – After watching Downton Abbey’s 2012 Christmas special, viewers were devastated by the death of which character?

9 – What do Excitable Edgar and Monty the Penguin have in common?

10 – Which English actor joins Kermit the Frog and Miss Piggy for a starring role in The Muppets Christmas Carol?

3 – Christmas is all around

9 – Both are stars of previous John Lewis adverts

1 – Which monarch delivered the first Christmas Day message on the radio?

2 – Which country began the tradition of the Christmas tree?

4 – Which of Shakespeare’s plays was written as a Christmas gift for Elizabeth I?

5 – Who banned Christmas carols after the English Civil War in 1647?

6 – What date in January should all your Christmas decorations come down by, according to tradition?

8 – In which modern-day country was St. Nicholas born in?

9 – What beverage company is credited with changing the colour of Santa’s suit from green to red, since he first started appearing in their advertising from 1931?

10 – East End baker Tom Smith invented an item in 1847 which is now a staple on the table at Christmas dinner – what is it?

1 – George V in 1932 – for a bonus, the speech was written by Rudyard Kipling, author of The Jungle Book.

4 – The Merry Wives of Windsor