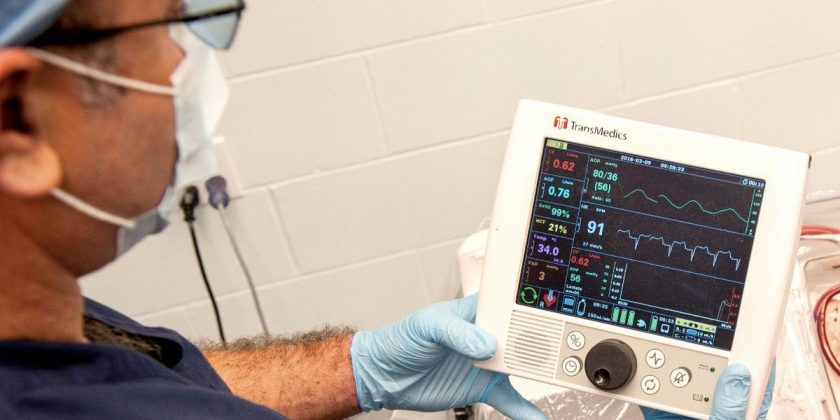 Two people who became the first patients in Scotland to have heart transplants using "heart in a box" technology are looking forward to Christmas with new hope, say surgeons.

Roger Marr, 46, from East Lothian and 41-year-old Julie-Ann Morris, from Glasgow, were critically ill before they underwent the procedures.

Mr Marr said hospital staff saved his life and gave him a future with his newborn son, who is now "running me ragged".

Ms Morris said she "didn’t have long to live" when she was admitted to hospital, but she’s now "so excited for the future" after being given a new lease of life.

The transplants were done thanks to the Organ Care System (OCS) at the Golden Jubilee National Hospital in Clydebank, West Dunbartonshire, earlier this year.

OCS is described as the world’s first portable system which keeps donated human organs warm and functioning outside the body for longer ahead of transplant.

It simulates the conditions within the human body and allows the organs to function as they would normally do.

The hospital said the OCS, created by Transmedics, extends the amount of time a donated organ can remain in a condition suitable for transplantation.

Boy, 2, accidentally ‘CASTRATED’ by surgeon and robbed of ‘normal future’

Instead of the traditional ice-box method, the "heart in a box" works by continually providing the donor organ with glucose, oxygen and blood – doubling the amount of time a donated heart is viable for transplant.

Mr Marr, an assistant rail construction manager from Prestonpans, had an infection which caused severe heart failure and was admitted to the hospital in November last year.

While awaiting his transplant, his wife Caroline discovered she was seven weeks pregnant with baby son Rocco, who was born in June.

Mr Marr said: "I owe so much to the donor, their family and transplant team at the Jubilee, I cannot put into words my gratitude or how I feel.

"They saved my life and gave me a life with my newborn son, who is now running me ragged."

Ms Morris, a senior insurance underwriter who had lived with heart problems for most of her life, received her heart days after being put on the transplant list.

She said: "When they said I could get a transplant, it wasn’t scary, it was quite exciting.

"I didn’t have long to live when I was admitted and I then knew I was never going to get out of hospital again unless I had a transplant, so you just go for it when it’s offered.

"It’s a slow recovery following the surgery but you see small improvements every week that just make me so excited for the future."

Golden Jubilee transplant surgeon Phil Curry said: "It is a fantastic achievement to have completed two heart transplants this year using the Organ Care System – for the first time in Scotland – with good results for the patients involved.

"Roger and Julie-Ann are both young and were critically ill, but they are now making good progress and I have little doubt that using the OCS helped keep the donors’ hearts in premium condition before transplantation.

"The OCS means that organs can be retrieved from farther away and that we can therefore consider organs which may have been previously rejected."