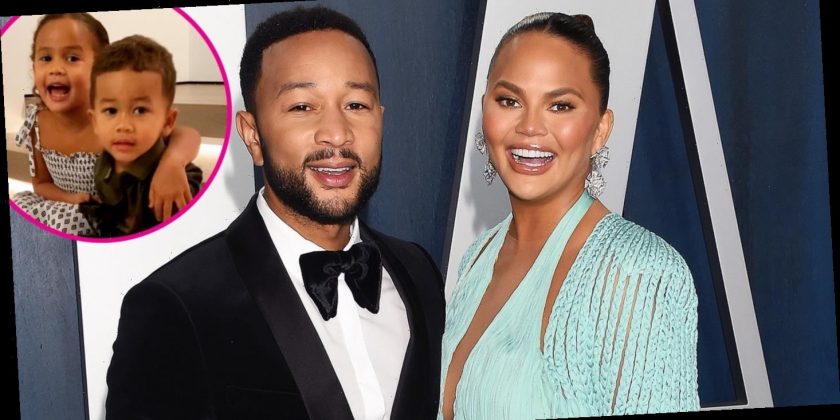 A family affair! Chrissy Teigen commemorated her seven-year anniversary with John Legend by enlisting their kids’ help to perfectly sum up their relationship.

The pregnant model, 34, shared a video of the couple’s two children, Luna, 4, and Miles, 2, on Monday, September 14, to celebrate the couple’s marriage.

“Happy anniversary,” Luna says in the Instagram video, grabbing her little brother and pulling him toward her. Miles, for his part, is trying to get away from his sister’s grip and play with a toy car.

Teigen captioned the funny clip: “Happy 7th anniversary! 14 years together! @johnlegend love u buddy. My best pal. You’re like a brother to me!!”

Happy 7th anniversary! 14 years together! @johnlegend love u buddy. My best pal. You’re like a brother to me!!

Shortly after wishing her love a happy day, the Chrissy’s Court star posted a second video, this time showing off Miles’ artistic skills.

“Miles, what is this?” Teigen asks in video, before revealing that Miles scribbled over the couple’s faces on one of their wedding photos. “[I] painted mommy!” the toddler responded.

I love it so much

The Lip Sync Battle cohost broke into laughter before saying, “You painted mommy? I love it. Thank you so much.”

The couple, who tied the knot in Italy in September 2013 after getting engaged in the Maldives in December 2011, announced in August that they are expecting their third child together.

Teigen debuted her baby bump in her husband’s “Wild” music video last month, before Legend, 41, opened up about the pregnancy news, calling it a “little quarantine surprise” during a Today show appearance a few weeks later.

The Bring the Funny judge learned she was expecting after her breast removal surgery in June, tweeting in August that she “was scared” when she saw the positive pregnancy test. “Was pretty positive you shouldn’t get your boobs out while pregnant? Pretty sure,” she wrote.

Throughout her pregnancy journey, the Sports Illustrated Swimsuit model has shared her cravings and photos of her growing bump.

Earlier this month, the Utah native gave fans a look at her ultrasound, which daughter Luna helped her do while at home. The next day, Teigen announced that she is on “official 2-week bed rest” ahead of the baby’s arrival.

“I’m taking this time to learn how to sew capes and kid clothes so s—t is about to get … astonishingly ugly,” Teigen tweeted on September 8.