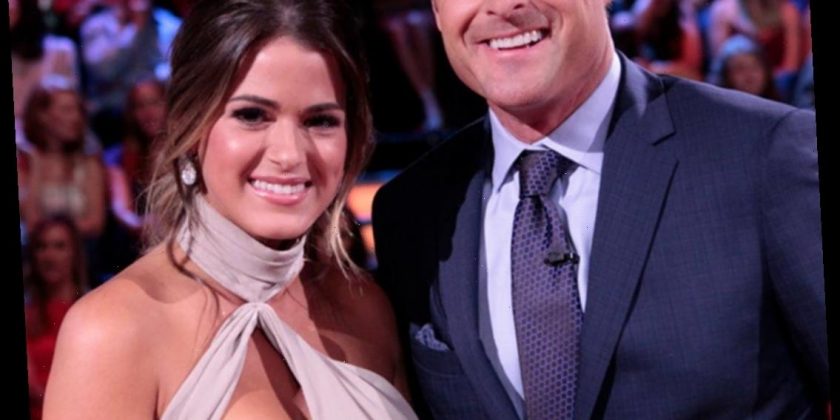 The Bachelorette host Chris Harrison is spotted back on the set with JoJo Fletcher, who filled in for him while we was dropping his son off at college.

Chris Harrison is getting back to business.

The Bachelor host has re-entered the bubble at the Palm Springs, Calif. resort where Tayshia Adams and Clare Crawley are filming their season of The Bachelorette.

An E! eyewitness shared an exclusive photo of the host catching up with JoJo Fletcher, who briefly filled in for Chris while he dropped his son off at college in Texas. The insider said the two met up and JoJo quickly caught the face of the franchise "up to speed" on everything he missed. "While Chris wasn't gone for long, because this season is so different and so crazy those two definitely needed a few minutes to exchange notes," the source explained.

It was originally predicted that JoJo would be filling in for two-weeks while Chris completed the CDC's recommended two-week self-quarantine period. Instead, it seems he returned to set in just a matter of days.

Chris' Texas getaway seems par for the course in a season that's been filled with twists and turns.

In recent weeks, E! News has confirmed a multitude of unforeseen events, including the replacement of Clare with Tayshia.  In early August, sources confirmed the contestant from Colton Underwood's season was brought on because Clare was already "falling in love" with one of her suitors.

Watch Paris Hilton Revisit Childhood Trauma in This Is Paris

And after that a flurry of stars from Bachelor Nation were spotted at La Quinta, with a source telling E! that Becca Kufrin and Hannah Ann Sluss were on-hand to offer "support" to the leading ladies. However, that didn't explain why Bachelor in Paradise bartender Wells Adams was also present.

There is likely more drama to come as Tayshia is still in the early days of her journey.

But what will happen next? Well, only time will tell what these producers have up their sleeves.

The Bachelorette will air Tuesdays on ABC this fall.