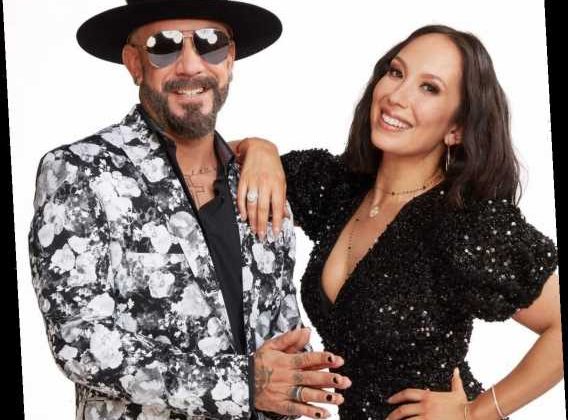 Dancing With the Stars pro Cheryl Burke is hoping for "only planned mishaps" after suffering a head injury during rehearsal with partner A.J. McLean.

Cheryl Burke is ready to shimmy and shake after suffering a "hard fall" in rehearsals for Monday night's episode of Dancing With the Stars.

In a clip from tonight's episode shared by People, it's revealed that Cheryl and celeb partner A.J. McLean had a major scare when the pro slammed her head on the dance floor in the middle of rehearsals during Sunday night's rehearsal. In the sneak peek, the Backstreet Boys singer tells the cameras, "Cheryl and I were practicing during stage rehearsal and it did not go well… It happened so fast, I just heard her head hit the floor."

Paramedics attended to the dancer, with ABC cautioning at the time that Cheryl may not be able to perform during the villains-themed episode.

Cheryl addressed the fall on Twitter, hinting that she has recovered in time to perform. "Yesterday, I took a hard fall while rehearsing for #VillainsNight. It's one of those things that can happen in a split second," she wrote. "Thankfully, I have the best partner I could ask for that was there to pick me up off the ground. Keeping our fingers crossed for only planned mishaps during the show tonight!!"

Cheryl has experienced her fair share of mishaps since joining the ABC series. Last week, the dancer told The Kelly Clarkson Show audience that she "wouldn't take full responsibility" for some of her previous partners' injuries, but admitted she played a part.

Jamie Foxx's ''Heart Is Shattered'' After His Younger Sister's Death

"Ray Lewis was my partner last season. First football player to ever get injured, my fault," she recalled. "Then we had Tom Delay. I danced with, fractured both his feet. Cristián de la Fuente—I broke his arm live on television when we did the samba and at the very end we had this dip and I feel my head just crash to the dance floor. And Tom Bergeron at the time had to cut to commercial because he broke his arm."

With just 10 contestants left in the running for the Mirror Ball trophy, Cheryl and A.J. can't afford another mishap.

It's unclear if A.J. is the star to beat as this season's scores are truly all over the place, but last week he did tie with three other contestants for the top spot.

Dancing With the Stars airs Mondays at 8 p.m. on ABC.