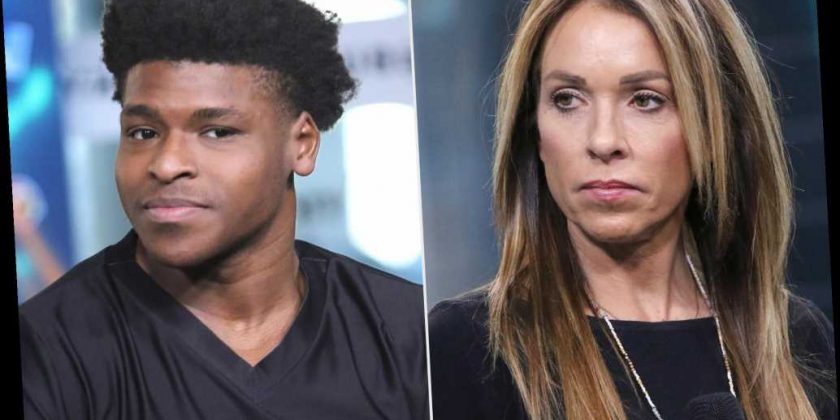 Cheer's Monica Aldama is speaking out about Jerry Harris' arrest on a federal charge for allegedly producing child pornography.

On Thursday, Harris, 21, was formally charged in Chicago, a statement from federal officials confirmed, alleging that he was arrested for "allegedly enticing an underage boy to produce sexually explicit videos and photos of himself."

Harris, the statement alleges, "contacted the underage boy on a social media application and repeatedly enticed him to produce sexually explicit videos and photographs of himself and send them to Harris, according to a criminal complaint filed in U.S. District Court in Chicago. The minor victim informed Harris during their initial online encounter that he was 13."

The criminal complaint against Harris also alleges the boy told his mother that in a bathroom at a cheerleading competition, Harris solicited oral sex from him.

Aldama — the head coach of the Navarro College cheerleading squad, which Harris was part of and is the subject of the Netflix docuseries Cheer — issued a statement on Instagram Friday morning, writing that she is heartbroken over the news.

"My heart is shattered into a million pieces. I am devastated by this shocking, unexpected news," wrote Aldama, who is currently competing on Dancing with the Stars.

"Our children must be protected from abuse and exploitation, and I'm praying hard for the victims and everyone affected," the coach, 47, added. "Please respect our privacy as our family mourns during this heartbreaking time."

A Netflix spokesperson told PEOPLE on Thursday: "Like everyone we are shocked by this news. Any abuse of minors is a terrible crime and we respect the legal process."

The criminal complaint also accuses Harris of admitting to FBI agents of soliciting and receiving child pornography on Snapchat from “at least between 10 to 15 other individuals he knew were minors.” The FBI conducted a raid on Harris' home earlier this week.

The news came just days after two underage twin brothers filed a lawsuit against Harris for allegedly sexually abusing them and demanding nude photographs from them. Manly, Stewart & Finaldi, the firm representing the twins in a civil suit, confirmed in a statement that the alleged victim in the criminal accusation is one of the twins.

The suit, filed Monday in Texas and obtained by PEOPLE, states the plaintiffs are both competitive cheerleaders who first met Harris in 2018 when they were 13. The suit alleges he leveraged his prominence in the cheerleading community to groom the two for abuse. "Plaintiffs were 'star struck,' as Harris was already a known All-Star Cheer personality, icon and coach within the state and nationally," the suit states.

A spokesperson for Harris told PEOPLE on Monday: "We categorically dispute the claims made against Jerry Harris, which are alleged to have occurred when he was a teenager. We are confident that when the investigation is completed the true facts will be revealed."

A statement from Sarah Klein, the plaintiffs' civil attorney, asserts: "We are grateful that the U.S. Attorney and the FBI have taken swift action to protect children by investigating, arresting, and charging Jerry Harris. This was made possible because our clients’ mother had the courage to report Harris to the FBI as well as the Fort Worth Police Department and provided evidentiary proof of the manipulation, sexual harassment, abuse, and exploitation that her sons had suffered."

If you or someone you know has been a victim of sexual abuse, text "STRENGTH" to the Crisis Text Line at 741-741 to be connected to a certified crisis counselor.