‘Cheer’ star Gabi Butler spoke to HL about moving on from Navarro & where she hopes to be headed next!

While her last two seasons with the Navarro College cheerleading team didn’t necessarily go as planned due to the pandemic and an unfortunate loss at nationals, Gabi Butler opened up to HollywoodLife.com in a EXCLUSIVE interview about where she hopes to use her extra year of eligibility. “I just tried out for Weber State, based in Utah, so I might be going there, which I’m super, super excited about,” the Cheer star told HL, while discussing her partnership with Silk Oatmilk. “Because of COVID, they gave everyone one more year of eligibility and I watched Weber and they were just an amazing team and this year they came out with insane skills. So I really was intrigued and I wanted to learn more.” 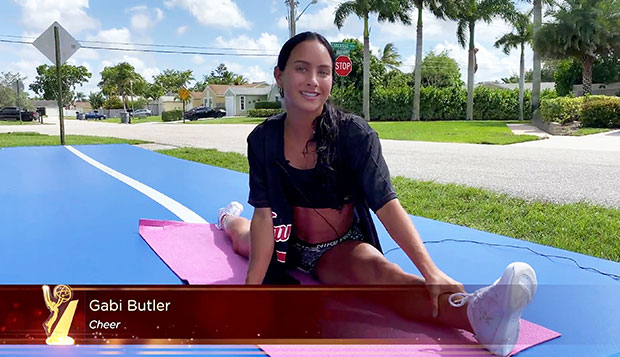 Before Netflix’s Cheer became an Emmy-nominated sensation, Gabi was a star in her own right, as one of the best competitive cheerleaders in the sport. “I’ve been cheering since I was eight, and now I’m 23, so it’s been a while! It takes a lot of focus, it takes a lot of training, and it really takes a person to want to go above and beyond to be the greatest of all time,” she explained. The Florida native hopes to be that person on the Weber team, which she says does one of the hardest stunts in the book.

“It’s basically when a guy holds a girl with one hand when she is in a one-handed handstand,” Gabi said. “The main thing for training to be on a team like Weber’s is focus and bringing your A-game because it is a very competitive team to be on. I have to put in extra training in, I have to put extra reps in.”

While she’s training hard, a big part of Gabi’s success comes from her nutrition, which includes Silk Oatmilk! “I put it in my yogurt, I put it in my coffee, I put it in my smoothies — It has the right nutrients that your body needs. Your body is a temple and it’s like a car, so you have to put gas in your tank to get the proper results.”

A national taste test has declared Silk Original Oatmilk as the best-tasting oatmilk on the market. To celebrate, Silk Oatmilk as the G.O.A.T., Silk invites everyone to declare their G.O.A.T. status; fans can proclaim greatness with Silk’s interactive Facebook and Instagram AR filter that immortalizes their selfie into a marble G.O.A.T. bust.