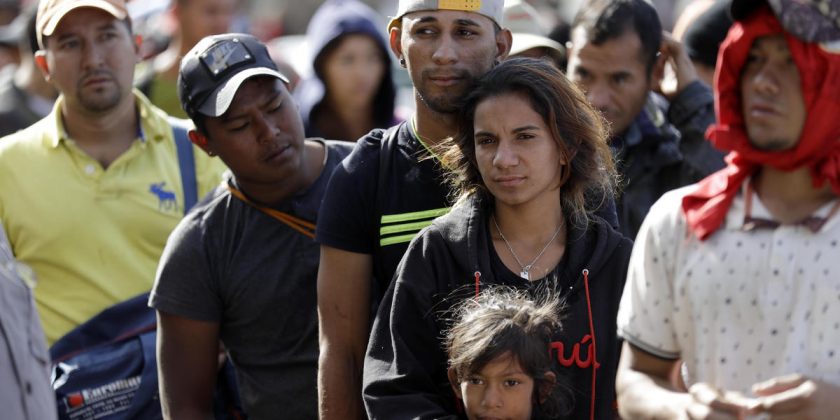 TIJUANA, Mexico — About 2,000 migrants from the Central American caravan are at America’s doorstep and another 1,200 from a second caravan set out from Mexico City toward the border Friday. With U.S. border inspectors processing only about 100 asylum claims a day at the main border crossing with San Diego, prospects grew that migrants would be stuck waiting in Tijuana for months.

The first group split from a larger group of about 5,000 planning to request asylum in the U.S. The caravan has fragmented somewhat in recent days in a final push to the border, with some migrants moving rapidly in buses and others falling behind.

With shelters already full, authorities in Tijuana opened a gymnasium and gated sport complex for up to 1,000 migrants, with a potential to expand to 3,000. But at least that many migrants were still on the road or trickling into the city aboard buses, and a third caravan was still waiting in Mexico City.

Tijuana faces a potential influx of as many as 10,000 in all. The city’s privately run shelters are meant to have a capacity of 700.

Francisco Rueda, the top deputy to Baja California state Gov. Francisco Vega de la Madrid, said, “This is not a crisis,” but agreed that “this is an extraordinary situation.” 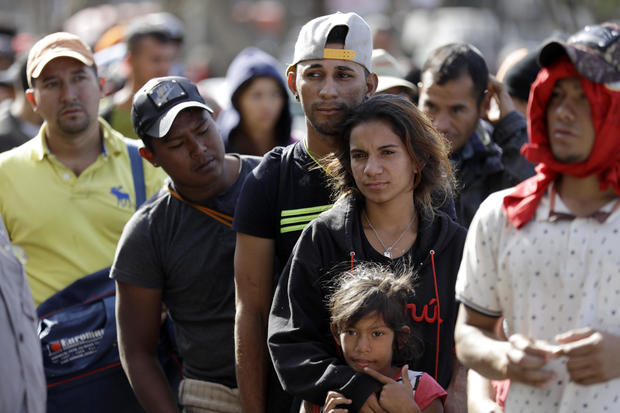 Marvin Ochoa, center, of Honduras, waits in line for a meal behind his wife Diana Marylin Ochoa after they arrived with a Central America migrant caravan to Tijuana, Mexico, Thursday, Nov. 15, 2018.

To claim asylum in San Diego, migrants enter their names in a tattered notebook held together by duct tape and managed by the migrants in a plaza outside the entry to the main border crossing. On Thursday, migrants who registered six weeks ago were getting their names called. The waiting list has grown to more than 3,000 names and stands to become much longer with the new arrivals.

Rueda said that if all migrants from the caravan currently in Tijuana were to register to seek asylum in the U.S., they would likely have to wait four months at current processing rates. For that reason, the state has asked Mexican federal authorities to encourage people in other caravans to go to other border cities.

Concerns continued about what the Central Americans will do, or how they will support themselves in the meantime.

Rueda said the state has 7,000 jobs available for its “Central American migrant brothers” who obtain legal residence status in Mexico.

“Today in Baja California there is an employment opportunity for those who request it, but in order for this to happen, it has to regulate migrant status,” he said.

The thriving factories in the city of 1.6 million are always looking for workers, and several thousand Haitian migrants who were turned away at the U.S. border have found jobs and settled in Tijuana the last two years.

Migrant caravans heading to the U.S. became a campaign issue in U.S. midterm elections. President Trump ordered the deployment of over 5,000 military troops to the border and has insinuated without proof that there are criminals or even terrorists in the group.

Many say they are fleeing rampant poverty, gang violence and political instability primarily in the Central American countries of Honduras, Guatemala, El Salvador and Nicaragua.