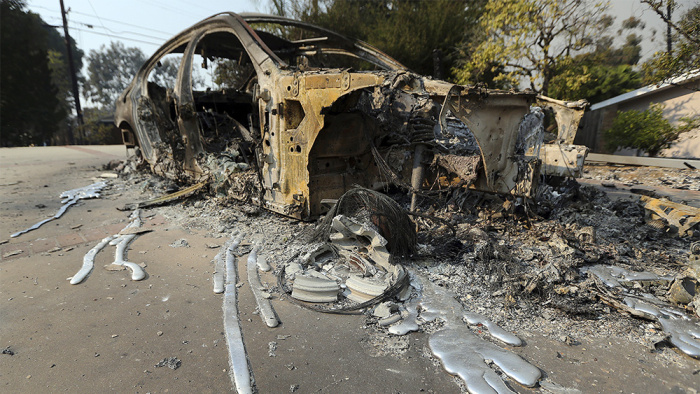 After a slight reprieve Saturday, the Santa Ana winds are expected to return in force Sunday and continue through Tuesday, which could exacerbate the Woolsey Fire in Malibu, Calif.

“Don’t be lulled by a false sense of security,” Ventura County Fire Department Chief Mark Lawrenson said at a press conference Saturday evening. “We know tomorrow Mother Nature is going to turn her fans back on.”

Lady Gaga, Kim Kardashian West, Kourtney Kardashian, Rainn Wilson, Alyssa Milano, and Melissa Etheridge have been evacuated from the Malibu area. Milano tweeted Saturday afternoon that her home was still standing. Wilson also posted to Instagram that the fire had missed his home by roughly a dozen yards, and that his family and animals were safe.

Barbra Streisand, Robert Downey Jr., Halle Berry, Jennifer Aniston and NBA star Kevin Durant also live in the area, along with Cher and Mark Hamill. Cher and Hamill both tweeted that the fire had approached their homes but that they so far remained unharmed.

“Shape of Water” director Guillermo del Toro evacuated his famed Bleak House, with its collection of horror memorabilia, and tweeted Saturday that the fire hadn’t yet reached the house, though he put out a small brush fire nearby with water he had in his car.

As of 8 a.m. Sunday, the fire had reached 10% containment with 83,275 acres burned. According to Cal Fire, 177 structures have been destroyed and 57,000 homes remain threatened.

Some evacuation orders, mostly stemming from the smaller Hill fire, which had ceased growing and was 70% contained as of early Sunday, were rescinded. Evacuation orders for parts of Thousand Oaks and Simi Valley also lifted Sunday. The city of Malibu remains under evacuation orders.

Three firefighters have been injured battling the wildfires, with two people reported dead in Malibu. Statewide, 25 have died in the California wildfires, which include the Camp fire in Butte County that razed the city of Paradise.

Reports indicate the renewed winds could reach up to 40-50 mph with gusts in the 60-70 mph range. The L.A. Times reported this could result in a fire vortex like the one observed in the Carr fire, which reached speeds of 143 mph and was estimated at 500 yards across at the base.