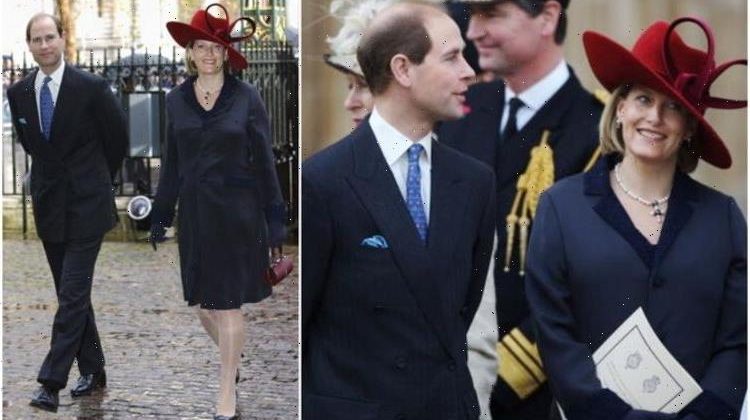 Prince Edward says bringing family together would be ‘chaos’

The Earl and Countess of Wessex are the only royal couple of their generation to last, with all three of Prince Edward’s older siblings getting divorced in the 1990s. Sophie Helen Rhys-Jones as she was previously known, was born in Oxford, on 20 January 1965.

She had a successful career in public relations working for a variety of firms, including Capital Radio, before launching her own public relations agency, RJH Public Relations, in 1996 with her business partner, Murray Harkin.

Prince Edward met Sophie Rhys-Jones for the first time at Capital Radio in 1987, through Sophie’s friend whom Edward was dating at the time.

It was not until several years later when the Queen’s youngest son made their relationship official.

It took six years until 1993 for the Prince and Sophie to meet again at a charity event to begin their love story, so although they are the longest standing royal couple to overcome the tests of time, it was not love at first sight when they first met.

However, the Queen’s youngest son and Sophie bonded over their love of sports and outdoor living.

Despite some reporting of their relationship troubles, it was short-lived, and their engagement was announced in January 1999.

Prince Edward proposed to Sophie with an engagement ring made by Asprey and Garrard, which was reportedly valued at £105,000.

This stunning diamond ring featured two heart-shaped gemstones, and the proposal took place during a Christmas holiday on Windermere Island in the Bahamas.

In June 1999 she married Prince Edward at a beautiful wedding ceremony in St George’s Chapel at Windsor Castle.

Their wedding service was televised to the world and was watched by more than 200 million people.

While many of the royal marriages of their generation sadly ended in divorce, Sophie and Edward’s love story has lasted well into the 21st century.

Royal expert Ingrid Seward has said: “The failures of the marriages of Edward’s beloved sister Anne and then, in rapid and ever more embarrassing succession, Andrew and Charles, made him even more determined to put caution before commitment.”

The former public relations executive was 34 when the royal engagement was announced – the same age as Edward.

Some royal commentators have discussed this being a factor in why the marriage had a strong foundation, as opposed to his older brother Prince Charles who was 12 years older than Princess Diana.

Since marrying, the couple has welcomed two children – their eldest daughter Lady Louise Windsor was born in 2003 and their son James, Viscount Severn in 2007.

Both Edward and Sophie are regulars on the royal engagement calendar and Sophie is meant to be a firm favourite with the Queen due to never causing drama.

Since Prince Philip’s passing in April and the debacle surrounding Megxit, Edward and Sophie have become much more high profile royals.

They have done many interviews this year as their strong foundation and close-knit family is something that has helped save the reputation of the monarchy.

However, they have not been without criticism for the entirety of their relationship.

Edward and Sophie endured harsh scrutiny for his love of theatre and also the couple’s lavish wedding registry.

But the royal couple has undoubtedly emerged as central figures for the future of the monarchy.