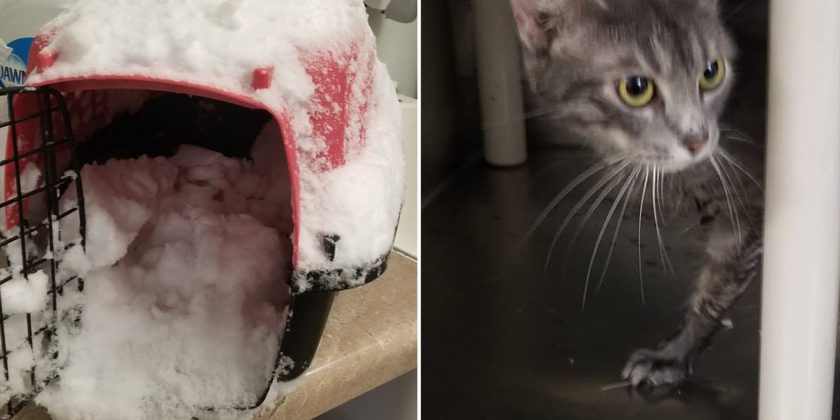 Winter is done with cold weather.

According to WQAD, the 1-year-old cat was abandoned near a Rock Falls, Illinois, animal shelter in a carrier packed with snow.

She was found on Wednesday morning by Happy Tails Humane Society‘s director of shelter medicine, Donald Czyczyk, who spotted the gray tabby’s carrier when he was driving up the shelter’s driveway to go to work. The bright pink container was lodged in the snow, with more of the cold stuff spilling in through the front of the carrier.

“I said, ‘There’s definitely not a cat in here.’ So I grabbed it, and next thing I know I saw an ear,” Czyczyk told WQAD of meeting Winter for the first time.

The director brought the animal inside the shelter to receive immediate care. Even though the feline had likely spent the night in frigid temperatures, packed in snow, Czyczyk says the cat still acted sweetly while being handled by Happy Tails’ staff.

Winter is now warm, fed and doing well aside from an itchy case of flea allergy dermatitis, but a few more hours outside and her fate could’ve been much different.

Czyczyk told OurQuadCities.com that he found the feline “buried alive, basically.” He believes the cat was abandoned in the snow, and then later was covered in more snow when a plow came by to clear the roads and driveways in the area.

Now that the cat is recovering, Happy Tails staff is turning their attention to finding the person who abandoned the animal in these cruel conditions.

The shelter is offering a $1,000 reward — which they helped raise through Facebook donations  — to anyone who provides information that leads to the arrest and prosecution of whoever left Winter behind.

Abandoning an animal in Whiteside County can come with a fine, according to WQAD, but that doesn’t mean residents are out of options if they can no longer care for a pet. Happy Tails provides instructions on how to safely rehome a pet on its website.

Winter herself should be ready for a new home soon. The shelter plans to put the cat up for adoption in the next week.