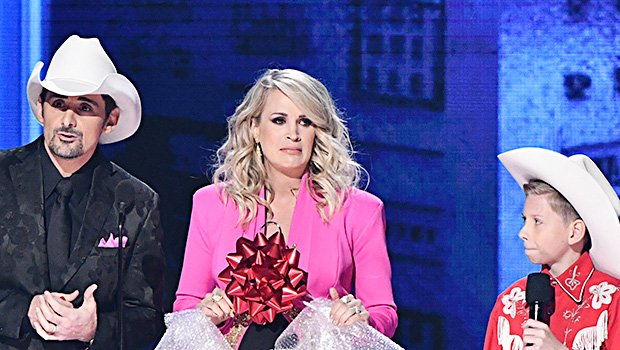 Brad Paisley & Carrie Underwood were joined by none other the yodeling Walmart Kid in their hilarious opening monologue! Watch the whole thing unfold here!

The 2018 CMA Awards are finally here! Taking the stage, co-hosts Brad Paisley and Carrie Underwood had some hilarious jokes and dropped some major bombshells. In addition to showing off her baby bump, Carrie admitted that she was going to have a boy, yelling “It’s a Willie”! On top of that, the viral sensation-turned-star Walmart Kid (AKA Mason Ramsey) made an appearance as well, although Carrie did admit “that is not my kid.” After crashing their monologue when they were singing a ditty about Lady Gaga and A Star is Born, Mason did some impromptu yodeling, thus keeping up his Yodel Kid title. Watch the segment below!

Since her scary fall, Carrie has showcased her face and while it was rumored that she suffered major injuries from the fall, she has since revealed her face and she looks great. However, at the time of her injury, one thing was certain: she was going to be ready to show her face by the CMAs. “Carrie is going to take some time to get back into the limelight again and she might wait until summer,” a source close to Carrie told HollywoodLife at the time. “She has to start filming her NFL pre-game spots around then, and she is looking to be 100% by then because she would also like to host the CMA Awards later this year.”

We’ll keep you posted with all of the latest CMAs news! In the meantime, check out all of the pics from the red carpet in our gallery above.